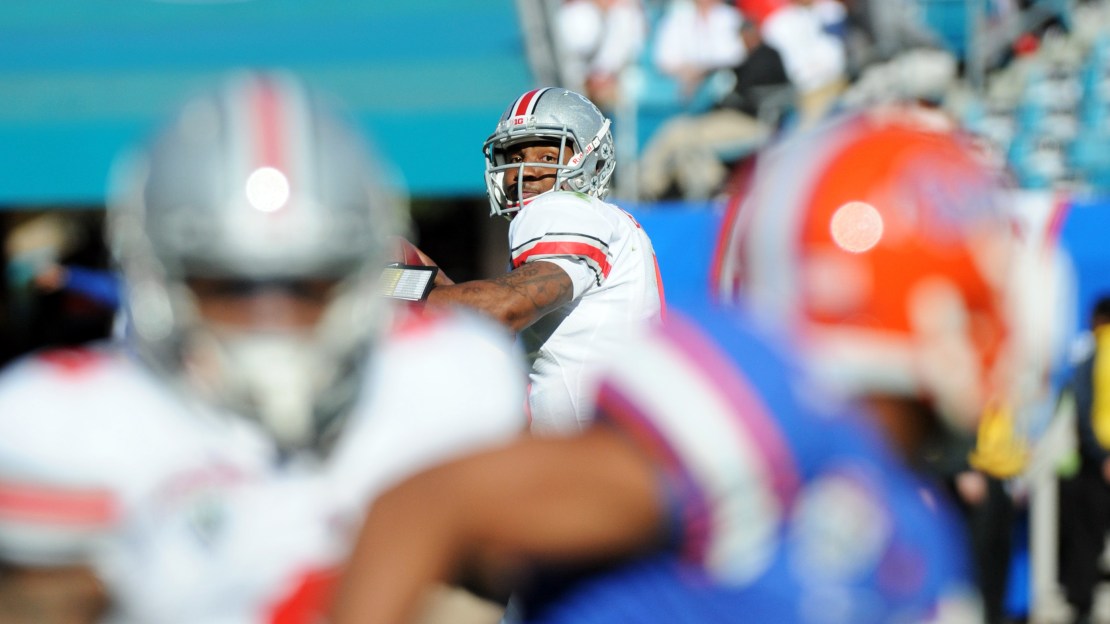 (AP) Florida's special teams came up big in the Gator Bowl, scoring twice as the Gators beat Ohio State 24-17 on Monday in a game between Urban Meyer's old team and his future one. Andre Debose returned a kickoff 99 yards – the longest scoring play in bowl history – and Chris Rainey blocked a punt that was returned for a touchdown. The speedsters helped the Gators (7-6) avoid their first losing season since 1979. Ohio State (6-7) finished below .500 for the first time since 1986. The Buckeyes can take solace in knowing that Meyer, who officially takes over at Ohio State this week, will make it a priority to improve special teams. Read the full AP recap, get Tom Dienhart's reaction, see the box score and view our photo gallery.

FINAL: After building a 14-point lead, Florida withstood a furious comeback by Ohio State and managed to pull out a 24-17 victory on Monday at EverBank Field.

Ohio State (6-7) found yardage hard to come by as Florida's (7-6) defense clamped down throughout the contest. The Buckeyes managed only 296 total yards in the game.

Chris Rainey carried the offensive load for the Gators, piling up 71 rushing yards on 16 attempts.

John Brantley threw for 129 yards while completing 12 of 16 passes for Florida. Brantley tossed one touchdown and one interception.

Ohio State's Braxton Miller was good for 165 yards during the game, completing 18 of 23 passes. Miller finished the game with two touchdowns and no interceptions. Miller had a trusted receiver in DeVier Posey. He caught five passes for 40 yards and one touchdown.

FOURTH QUARTER: Braxton Miller had a productive quarter for Ohio State. He threw for 76 yards and one touchdown and ran for eight yards, but the Buckeyes' comeback effort fell short in a 24-17 loss.

Florida expanded its lead to 24-10 thanks to an eight-play, 53-yard drive that ended when Caleb Sturgis kicked an 18-yard field goal.

Ohio State made the score 24-17 after Miller and Jordan Hall hooked up for an 11-yard touchdown to finish off an 88-yard drive. The Buckeyes used Miller's 38-yard pass to fuel the drive.

THIRD QUARTER: In the third quarter, Florida's Omarius Hines stood out. He caught one pass for 32 yards, and the Gators now lead 21-10.

Florida made the score 21-10 when Chris Rainey returned a blocked punt for a touchdown.

The Gators are threatening to score to start the fourth quarter and have the ball on Ohio State's four-yard line.

SECOND QUARTER: DeVier Posey led Ohio State in the quarter. He caught two passes for 16 yards and one touchdown, but the Buckeyes have closed the gap to 14-10. A 72-yard drive that ended when Braxton Miller tossed a five-yard touchdown to Posey helped Ohio State narrow the deficit to 14-7.

The Buckeyes closed the gap to 14-10 when Drew Basil kicked a 47-yard field goal to finish off a 20-yard drive.

Ohio State is set to receive to start the second half.

FIRST QUARTER: Florida got things going through the air, passing for 80 yards in the quarter, and the Gators lead 7-0 at the end of the first quarter. Florida struck first when John Brantley and Deonte Thompson hooked up for a 16-yard touchdown, the final play of a 14-play, 80-yard drive.

Ohio State has the ball on its own 41-yard line to begin the second quarter.