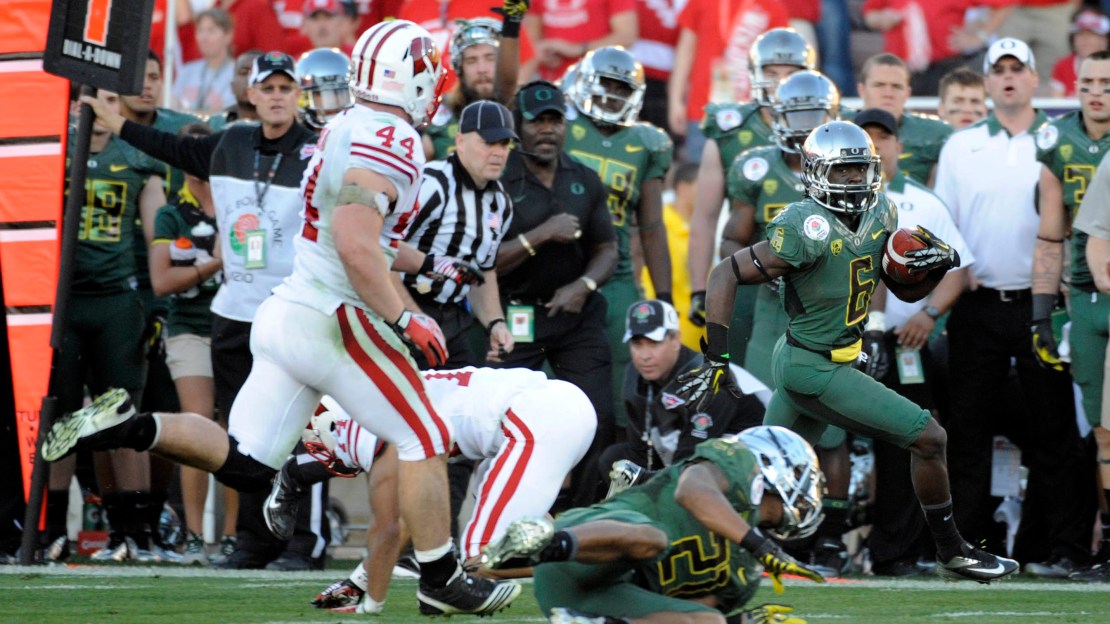 And so it went, for four exhilarating and exhausting quarters in one of the most exciting Rose Bowls ever. In the end, Oregon landed a few more punches in taking a 45-38 victory in what was the highest-scoring Rose Bowl ever.

?It?s awesome,? said Oregon coach Chip Kelly. ?It?s been 95 years since you can say that the Oregon Ducks are Rose Bowl champs.?

Get our Rose Bowl game recap and watch video highlights.

The records seemingly fell with each passing moment. The schools combined for the highest-scoring first quarter (14-14) and first half (28-28) in Rose Bowl annals, in addition to topping the 80 points tallied in Washington?s 46-34 victory over Iowa in 1991. Oregon fell just shy of topping USC?s 633 yards vs. Illinois in 2008.

?It feels great,? said Kelly. "Any time you win it feels unbelievable. And the thing that gets you excited is when you can share it with your players, and they see kind of the fruits of their labor pays off. I've never been around a harder working group of guys.

?But that's why you win. There are no shortcuts to success. If you work hard, you're going to have an opportunity to be successful, and these guys get it, and that's what I'm proud of.?

This was a game all about big plays. Oregon averaged 9.7 yards per play; Wisconsin 7.1, with the Ducks finishing with 621 yards and the Badgers 508. But in the end, the Badgers were done in by a lost fumble by wideout Jared Abbrederis late in the fourth quarter when Wisconsin was driving for the potential game-tying touchdown.

?Well, it's never easy,? said Bielema, who is 2-4 in bowls. ?I'm not saying I'd rather lose by 40 points though. I mean, it just make it's that much more gut wrenching. But on the same account, you can hold your head high knowing the perseverance, and the challenge and response that our guys showed was truly amazing and a great credit to their character.?

Each team?s coach entered the game looking for that signature bowl victory. Kelly was 0-2, losing the Rose Bowl to Ohio State after the 2009 season and falling to Auburn in the BCS title game last season.

Bielema could feel Kelly?s pain. He brought a 2-3 record in the postseason, dropping a 21-19 decision to TCU on this field last season that left a bitter taste in the mouths of the Badgers. In fact, it motivated Wisconsin for the last 365 days. Alas, that motivation wasn?t translated into victory, as the Big Ten fell to 1-7 in the Rose Bowl since the 2000 season.

?Well, obviously not an outcome that we're happy with,? said Bielema. ?Something that we'll carry with us for the rest of our lives and entire coaching career for me. I've been out here twice, and leave two games that are incredible football games. My guess is if you don't care who won the game, it was probably a fun football game to watch, but doesn't help us out.?

Only Kelly?s pain was eased, as he led the Ducks to their first Rose Bowl title since the 1916 season.

?Personally, I'm just proud of our guys and how they represented our school,? said Kelly.? None of us were around 95 years ago, and we never talked about it. We didn't talk about last year's game against Auburn or being here two years ago. We just talked about we're a forward thinking operation.?

Entering the game, everyone focused on the prolific offenses for each team. And for good reason. Wisconsin came into the contest ranked No. 5 in the nation in scoring (44.6 ppg). Oregon was No. 3 (46.2 ppg). And each squad was fueled by a strong ground game, with Oregon ranking fifth in the country (295.7 ypg) and Wisconsin 11th (237.4 ypg).

The focal points for those prolific ground games were Badger running back Montee Ball and Duck running back LaMichael James. And neither disappointed. Ball finished with 164 yards, tying Oklahoma State?s Barry Sanders? NCAA single-season touchdown mark with his 39th score of the season.

?It's been an honor since day one when I was being mentioned with him, and it will stick that way,? said Ball, a junior who may turn pro. ?As the game was going on, I was trying to look for the victory. Get the W on the chart.

?But like I said, it is what it is. I had a great season. I'll look back on this season, and if I decide to come back, I'll make sure I carry forward what I did this season to next season.?

And the quarterbacks for each team also played well on a night the defenses got beat up. Wisconsin?s Russell Wilson hit 19-of-25 passes for 296 yards and two scores and Oregon?s Darron Thomas completed 17-of-23 for 268 yards and three touchdowns.

?T personally, you know, coming here this year, and I actually watched the Rose Bowl game last year, just being with these guys,? said Wilson. ?They're a great bunch of guys that have the determination. We lost three games, basically, with a total of maybe within 40 seconds. It's pretty wild.

?All of those situations were all unfortunate. It's pretty crazy how each one of them panned out. For whatever reason, I think that next year's team is going to have a great bunch of guys that, one, have a lot of experience now, and two, have a lot of determination to be great. Coach Bielema does a great job of that.?

Both teams came out flying in the first half. Abbrederis scored on a 38-yard pass; Oregon countered with a 1-yard James scoring run. And on it went, as the teams combined to score a Rose Bowl record 56 combined points in a half in a 28-28 tie. At intermission, Oregon had 341 yards on 29 plays, averaging 11.8 yards per play. Wisconsin notched 295 yards.

The second half started with a bang, as Oregon scored on the third play of the half on a 64-yard touchdown run by Thomas, who in the first half scored on a 91-yard scoring run. Oregon also scored on a 54-yard pass catch by Kenjon Barner for a Duck team that teems with speed-more speed than Wisconsin had seen all season.

?Well, Number 6 (DeAnthony Thomas) is special,? said Bielema.? Obviously, LaMichael is very special. But we knew going into this game. We talked about tackling, but on a couple of those plays, you look at the 98 yarder, or whatever that was, nobody put a hand on it.

?Obviously a couple of mental break downs whether it be read keys, reactions, we didn't even challenge them on two or three of their scores, and nobody can win winning that. We do know they had the speed to outrun us if they got to that point.?

What?s next for Wisconsin? Wilson is gone and Ball may turn pro, but most of the line and some good pass catchers will be back. The defense must replace five starters, and Bielema must hire an offensive coordinator. But look at the Leaders Division. There are lots of questions.

What will Penn State look like? Illinois has a new coach in Tim Beckman. Indiana coach Kevin Wilson is in just his second season. Purdue is a work in progress. Ohio State in ineligible for the Big Ten title and a bowl under new coach Urban Meyer.

?As far as us moving forward, I'm kind of tired of tears of sadness,? said Bielema. ?I wanted to come out here and experience tears of joy at some point.
?So we'll rebound from this. I wouldn't trade in anything, anyplace in the world for that locker room that I have right now and the way that they continue to persevere.?