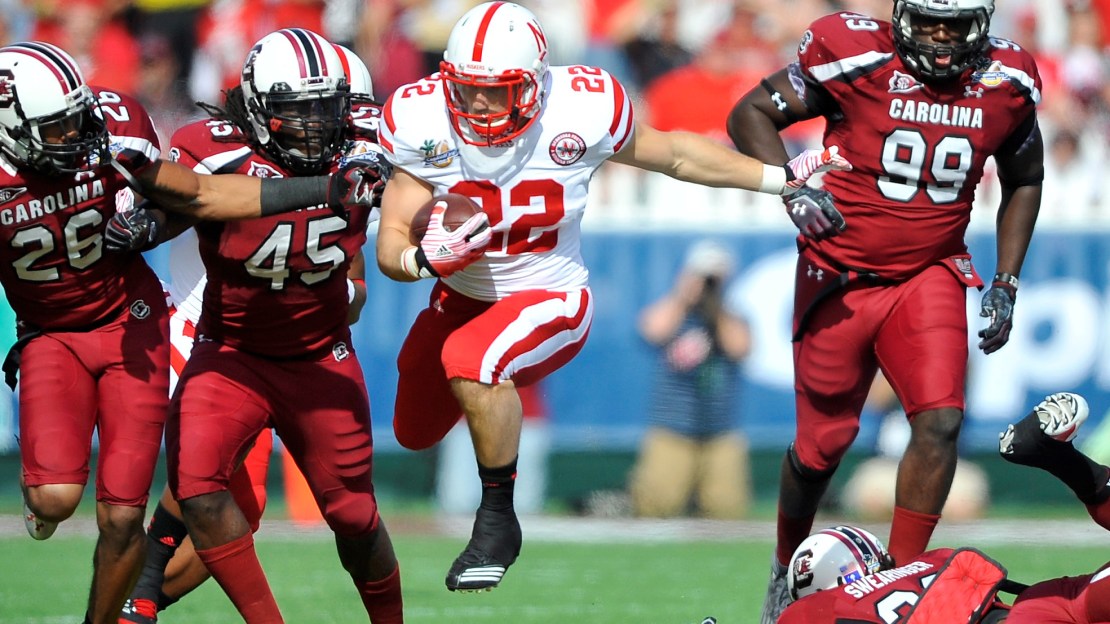 (AP) Connor Shaw threw two touchdown passes and No. 11 South Carolina had six sacks as the Gamecocks shut out the Nebraska in the final three quarters of 30-13 win in the Capital One Bowl on Monday. The victory gave South Carolina 11 wins for the first time in school history and snapped a string of three straight bowl losses. Nebraska lost its second consecutive bowl game and drops to 12-6 all-time in bowl matchups against SEC foes. Both teams lost standout players in the third quarter when Gamecocks' leading receiver Alshon Jeffrey and Cornhuskers' cornerback Alfonzo Dennard were ejected for a post-play skirmish in which both players threw punches. Read the full AP recap, get Tom Dienhart's reaction, see the box score and view our photo gallery.

FINAL: Connor Shaw threw for 229 yards and two touchdowns and rushed for 42 yards and one touchdown, leading No. 9 South Carolina to a 30-13 victory over No. 20 Nebraska on Monday at Florida Citrus Bowl.

Home run plays keyed South Carolina's (11-2) scoring attack. The Gamecocks burned Nebraska's (9-4) defense for five plays of more than 20 yards. With 8:37 to go in the second quarter, Shaw found Ahmad Christian open for a 78-yard pass for South Carolina's biggest gain of the game. Despite the highlight, the Gamecocks failed to score on that drive, which stalled at the Cornhuskers' three-yard line.

Nebraska found yardage hard to come by as South Carolina's defense clamped down throughout the contest. The Gamecocks' defense allowed just 252 total yards as it frustrated the Cornhuskers' offense.

Taylor Martinez threw for 103 yards while going 10-16 for Nebraska. He tossed one touchdown and one interception. Martinez also ran for 38 yards on 16 attempts.

FOURTH QUARTER: South Carolina stifled Nebraska's offense, giving up just -21 total yards in the fourth quarter and the Gamecocks closed the door on the Cornhuskers 30-13.

The Gamecocks went on a 21-point run to close the game.

South Carolina added to its advantage when Connor Shaw found Kenny Miles open for a nine-yard touchdown pass, the finishing touch on a five-play, 41-yard drive to give the Gamecocks the lead, 23-13. Ace Sanders' punt return set South Carolina up to start the drive.

The Gamecocks opened up the lead, 30-13, after Miles pounded in a three-yard touchdown run to end a 12-play, 71-yard drive.

South Carolina's Shaw hit 200 yards passing for the game in the quarter, part of his 229-yard passing performance.

THIRD QUARTER: There were more punts than points in the third quarter and the margin is still three, as South Carolina leads 16-13.

Both teams saw their defenses make stands, forcing three punts in the quarter.

Nebraska has possession at its own nine-yard line to start the fourth quarter.

SECOND QUARTER: South Carolina's passing attack has looked sharp over the last 15 minutes of action, with 148 yards, and the Gamecocks have taken the lead 16-13. Connor Shaw's 51-yard touchdown pass to Alshon Jeffery finished off a three-play, 71-yard drive and gave South Carolina the lead, 16-13.

The Gamecocks' Jeffery reached the 100-yard receiving mark for the game thanks to four catches for 148 yards in the quarter, and currently sits with 148 yards in all. Nebraska is set to receive to start the second half.

FIRST QUARTER: Kenny Bell led No. 20 Nebraska in the quarter. He caught a 30-yard touchdown pass, and the Cornhuskers lead 13-9 at the end of the first quarter.

Nebraska scored when Taylor Martinez and Bell hooked up for a 30-yard touchdown to polish off a three-play, 46-yard drive, giving the Cornhuskers the game's first lead. Nebraska started in good field position when the Cornhuskers returned a punt. Nebraska put two points on the board when.

Connor Shaw's one-yard touchdown run gave No. 9 South Carolina the lead, 9-6, and was the final play of an 11-play, 55-yard drive. The Gamecocks looked exclusively to the run game on that possession.

The Cornhuskers will start the second quarter with the ball on South Carolina's 45-yard line.