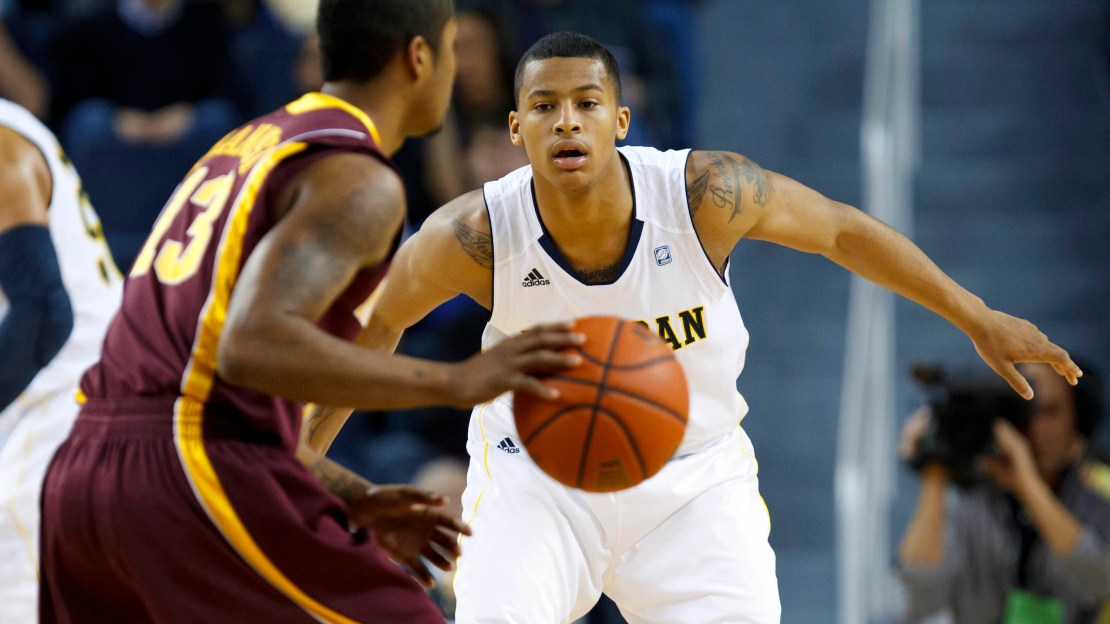 No. 16 Michigan held off feisty Minnesota (recap) to move to 2-0 in the Big Ten and Northwestern dropped Penn State (recap) for its first conference win in men's hoops action Sunday. Catch up on all the day's action on our Big Ten scoreboard and get recaps and stats in this post. Gus Johnson was on the call for the Minnesota-Michigan game, and here are his best calls from today. Check out our popular Johnson archive. Also, watch Johnson's call of Trey Burke's spin and bucket now.

FINAL: Trey Burke scored 27 points to lift No. 16 Michigan to a 61-56 win over Minnesota on Sunday at Crisler Arena in Ann Arbor. Michigan (12-2) nearly blew the eight-point lead that Jordan Morgan gave them on a free throw with 2:14 left in the first half. The Wolverines struggled from the floor, shooting 38 percent (20-of-52). Michigan was able to secure second chance opportunities, grabbing 14 offensive boards. Ralph Sampson III scored six points, hauled in 10 rebounds, and went 3-of-5 from the field for Minnesota (12-3) in the game. The Golden Gophers shot 8-of-20 from three-point range during the game, good for 40 percent. Minnesota shared the ball to the tune of 16 assists on 21 baskets. The Golden Gophers also got double-digit contributions from Rodney Williams, who scored 11 points and Julian Welch, who scored 11. Winning the battle on the boards was crucial for the Wolverines as they grabbed 34 rebounds to 26 for Minnesota. Free throws played a key role in the outcome, as Michigan not only went to the line 15 more times than the Golden Gophers, but made the most of its opportunities, shooting 15-of-23. Those free throws came courtesy of 18 fouls committed by Minnesota who was 6-of-8 from the line. The Wolverines have now won seven straight games with the victory.

HALFTIME: No. 16 Michigan has locked down Minnesota's offense and leads 23-19 at halftime. The Wolverines built their lead by attacking the rim and getting to the foul line. Michigan made 12 of 12 free throws. Trailing 11-8, the Wolverines used an 11-0 run to blow past the Golden Gophers and take a 19-11 lead. Tim Hardaway Jr., the leading scorer this season for Michigan, has not made much of an impact through the first 20 minutes. The sophomore enters halftime with three points, well below his season average of 16.2. Minnesota played team basketball in the first half, to the tune of six assists on eight field goals. The Wolverines' Trey Burke had a big first half, with 11 points. The Golden Gophers' Rodney Williams already has seven points.

FINAL: Drew Crawford scored 21 points and John Shurna added 17 points and eight boards as they teamed up to lead Northwestern to a 68-56 victory over Penn State on Sunday at Welsh-Ryan Arena in Evanston. Crawford carried the offensive load for Northwestern (11-3), finishing with 7-of-9 shooting from the field. The lead changed hands nine times in a back-and-forth affair. The Wildcats shot 55 percent from the field (22-of-40). Northwestern shot 9-of-21 from three-point range during the game, good for 43 percent. The Wildcats shot 15-of-25 from the free throw line. Northwestern also got a double-digit effort from Dave Sobolewski, who scored 20. Tim Frazier contributed 16 points and yanked down five rebounds for Penn State (8-7) in a losing effort. The Nittany Lions had trouble finding their touch, shooting just 34 percent (18-of-53) from the field. Penn State gave itself second chances during the game, snatching 14 offensive rebounds. The Nittany Lions also got solid contributions from Jermaine Marshall, who had 14 points and Cammeron Woodyard, who had 11. Penn State pounded the boards hard in defeat as it grabbed 32 to 25 for the Wildcats.

HALFTIME: The halftime lead is with Penn State, 26-23, as is the rebounding edge, which the Nittany Lions dominated by a 23-12 margin. Northwestern distributed the ball with five assists on seven field goals in the first half. Penn State goes into the break with the offensive rebounding advantage, with 12 to the Wildcats' two. The Nittany Lions shared the ball, finishing with six assists on eight field goals in the first half. Northwestern's Dave Sobolewski already has 10 points. Penn State's Matt Glover had a big first half, with four points and seven rebounds.