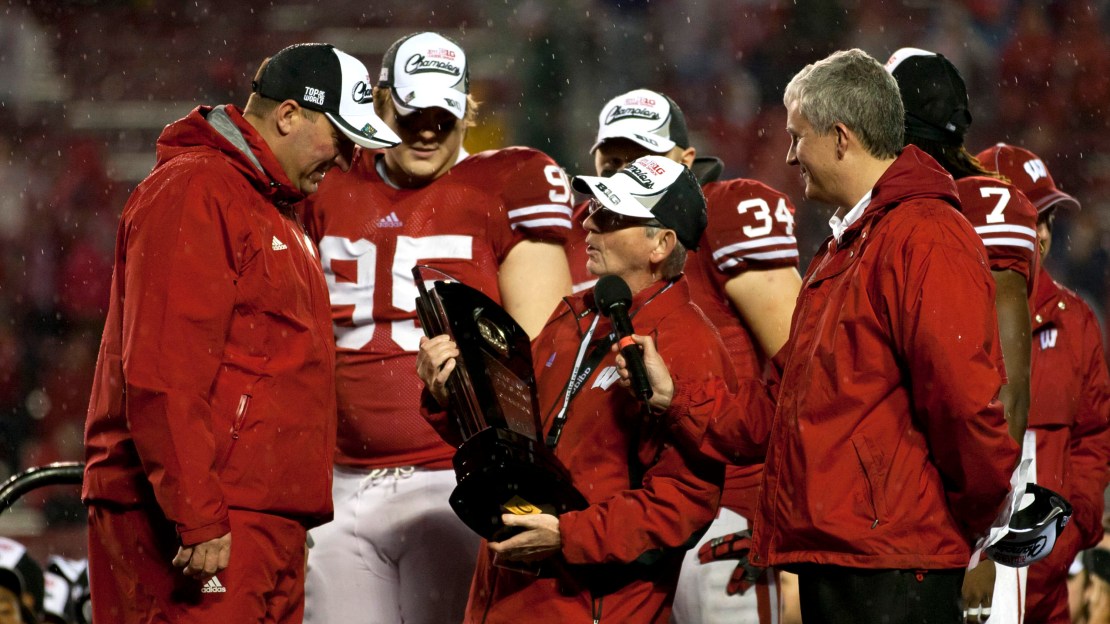 Wisconsin and Oregon are no strangers to the Rose Bowl. The Badgers are making their second consecutive trip to the Granddaddy of Them All, while the Ducks are back for the second time in three seasons. Both teams are fresh off their respective conference title games, and both can score points in a hurry. Like many seasons before, the Rose Bowl should be one of the more exciting bowl games of the year. BTN.com senior writer Tom Dienhart breaks down the game, gives his keys and offers his prediction. See it all in this post and find the entire 2011-12 bowl schedule.

Storyline: If you like offense, you will like this game. Wisconsin?s attack leads the Big Ten in scoring and ranks fourth in the nation (44.6 ppg). The rushing offense is the bellwether, ranking No. 1 in the league and No. 10 nationally (237.4 ypg). The passing attack is fourth in the Big Ten (229.5 ypg). Oregon?s offense is tops in the Pac-12 and No. 3 in scoring (46.2 ppg). The Ducks pace the league and rank No. 5 in the country in rushing (295.7 ypg). But the passing wanes, ranking No. 10 in the league (219.6 ypg). Still, it?s productive and explosive for a Duck team making its second Rose Bowl appearance in three years under coach Chip Kelly; this is the Badgers? second trip in a row to Pasadena under coach Bret Bielema. It?s worth noting that teams that have had time to prep for Oregon have had success. Boise State (2010) and LSU (2011) each toppled the Ducks in the last two season openers for Oregon; Auburn beat the Ducks in the BCS title game last season.

Player on the spot: RB Montee Ball. He?s the star of stars in this marquee matchup, a scoring machine who refuses to be stopped. The junior has a Big Ten-record 38 touchdowns. With two more vs Oregon, Ball will set the NCAA single-season record set by Oklahoma State?s Barry Sanders in 1988. Ball?s running opens room for the Badger passing game, which is fueled by star QB Russell Wilson. And Ball will benefit from having C Peter Konz in the lineup after he injured an ankle vs. Minnesota on November 12.

Best individual matchup: Wisconsin LBs Mike Taylor and Chris Borland vs. Oregon RB LaMichael James. Taylor and Borland lack great athletic ability, but each is relentless from sideline to sideline and a tackling machine. Taylor, a junior, leads the Big Ten in tackles, while Borland, a sophomore, is fourth. The tandem will be pushed to the limit trying to slow down the explosive James.

Best unit matchup: Oregon defensive front seven vs. Wisconsin RB Montee Ball. The Ducks have the No. 5 rushing defense in the Pac-12 (137.5 ypg). Can Oregon slow down Ball? If not, the Badgers could run away with this game with the big, physical Wisconsin line over matching and over powering a smallish but quick and athletic Duck front.

Fast fact: How is this for offensive balance-Wisconsin has 2,960 yards rushing and 2,765 yards passing.

Three reasons for optimism:
1. RB Montee Ball. What more can be said about the Heisman finalist? He leads the Big Ten in rushing with 1,622 yards (135.5 ypg) and has scored at least two touchdowns in every game in 2011. It will be vital for the Badgers to run well, which will wear down the Oregon defense and keep the ball away from the powerful Duck offense. The Ducks will look to DE Dion Jordan, LB Josh Kaddu and S Eddie Pleasant to contain Ball and productive backup James White.

2. QB Russell Wilson. He transferred from N.C. State over the summer, quickly was named a captain and then went out and posted one of the greatest seasons ever for a Badger signal-caller. The senior is the No. 2 most efficient passer in the nation, hitting 72.5 percent of his attempts for 2,879 yards with 31 touchdowns and just three interceptions. And Wilson has thrown a touchdown pass in an NCAA-record 37 consecutive games. He also is a threat with his feet with 325 yards rushing. Wilson has some good targets, as seven players have at least 12 catches. Nick Toon (55 catches for 822 yards and nine touchdowns) sets the pace, and Jared Abbrederis (51 catches, 814 yards, seven touchdowns) is underrated. Speaking of Abbrederis, he could be an X-factor as a return man.

3. Oregon?s passing. The numbers don?t blow you away, but they don?t need to with the way the Ducks run. Oregon QB Darron Thomas hits 61.4 percent of his passes for 2,493 yards with 30 touchdowns and six picks; and he?s 22-3 as a starter. And when backup Bryan Bennett has played, he has excelled.

Three reasons to worry:
1. Keeping up with Oregon?s offense. The Ducks run at hyper speed, going no huddle and pushing the pace with a frenetic style that doesn?t allow for substitutions. James leads the national with a 149.6-yard rushing average, running for 1,646 yards and 17 touchdowns. Maybe most impressive: James averages 7.4 yards per carry. When James isn?t in, Oregon counters with Kenjon Barner, who has 909 yards rushing. And freshman De?Anthony Thomas is another speed demon.

2. Where are the defensive playmakers? The Badgers lack them. There is no J.J. Watt type of player up front for Wisconsin, as sacks and tackles for loss haven?t been abundant.

3. Speed. Oregon has lots of it. Wisconsin? Not so much so. The Badgers haven?t faced an attack with this much speed and athleticism all season. If Wisconsin had issues dealing with the speed of, say, Michigan State, how will the Badgers perform vs. the supersonic Ducks? The Oregon defense has juice, too, pacing the nation with 43 sacks.