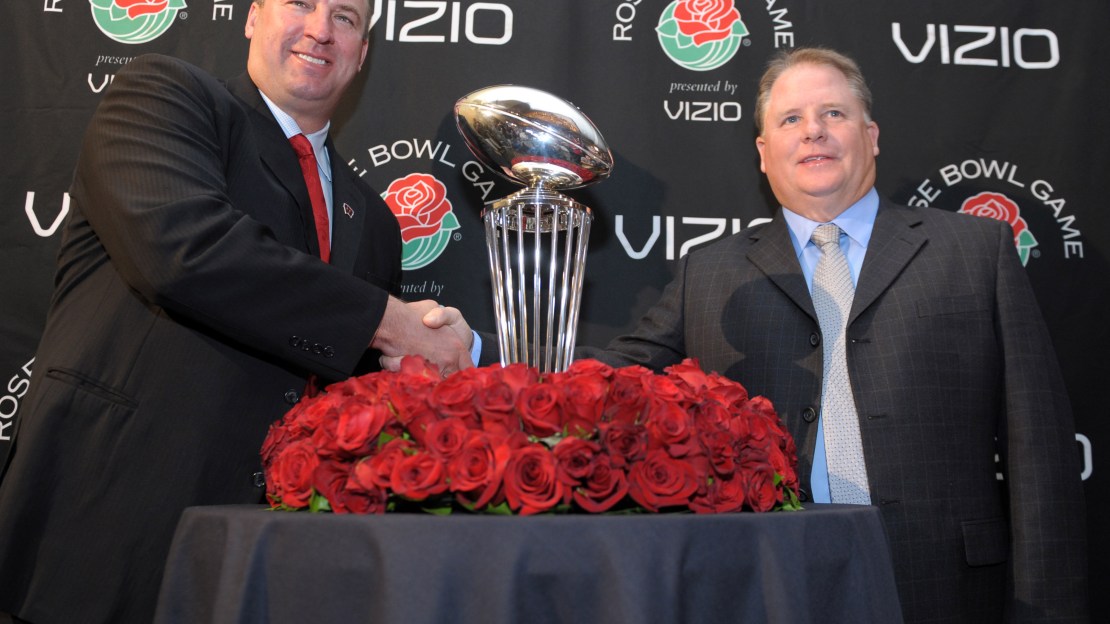 The Rose Bowl is nearly 24 hours away. All the talking has stopped and it's time to focus on the game. Find Tom Dienhart's breakdown and analysis of the matchups that will take place on Monday in the Rose Bowl between Wisconsin and Oregon in this post.

Wisconsin quarterback: Since transferring from N.C. State over the summer, Wilson has been a model of efficiency in hitting 72 percent of his passes with 31 touchdowns and just three interceptions. He also can make plays with his feet, and is a terrific leader who teems with poise and pride.

Oregon quarterback: No Duck has thrown more touchdown passes than underrated Darron Thomas? 63. He has lots of big-game experience and is an underrated passer and decision maker in Oregon?s spread-option attack. But he lacks a burst as a runner since injuring his left knee in mid-October. Thomas is now encumbered with a brace. His injury woes have given backup Bryan Bennett game time, and he has impressed. Wisconsin running backs: It all begins with Montee Ball, who has a national-best 1,759 yards rushing. The secret to this success was dropping 20 pounds in the offseason to become quicker. And Ball is on a roll, averaging 181.2 yards in the last five games. He also has a great escort in sledgehammer fullback Bradie Ewing and a top-notch backup in James White.

Oregon linebackers: The Ducks employ a committee approach to keep players fresh in their bend-but-don?t-break defense. It will be vital for Josh Kaddu to set the pace and have a big game. Michael Clay is an athletic option who will need to cover a lot of ground. Still, Oregon hasn?t seen a running game as physical and powerful as this.

Oregon running backs: There is no more explosive running in America than LaMichael James, who has run for 1,646 yards despite missing two games with an elbow injury. And the Ducks throw more speed at foes when they insert Kenjon Barner and DeAnthony Thomas, the fastest of the trio. It?s downright scary.

Wisconsin linebackers: Mike Taylor and Chris Borland are tackling machines who rank 1-2 in the Big Ten in stops for a linebacking corps that is the strength of the defense. Kevin Claxton holds his own, too, as a physical force for a defense that ranks sixth in the nation in scoring (17.0 ppg). Still, if these guys take a poor angle or miss a read, it could result in a long play for the swift Duck runners.

Wisconsin defensive backs: The stats look great, as the Badgers are No. 3 in the country vs. the pass (155.0 ypg). And the 15 picks are No. 2 in the Big Ten. But Wisconsin?s didn?t see many top-flight passers in the Big Ten. Cornerback Antonio Fenelus needs to shine, as does savvy free safety Aaron Henry for a Wisconsin secondary that lacks the speed to matchup with the Ducks? speedy pass-catching options. Wisconsin receivers: This is a solid crew that is long on production and ability but short on top-end speed. Sound familiar? Nick Toon is the go-to guy, while Jared Abbrederis is a blue-collar option who just finds a way to get it done. Jacob Pedersen is an underrated tight end and red-zone maven. This is the first triumvirate in school annals to combine for 24 touchdown passes.

Oregon defensive backs: This is a nice group that has overcome the suspension of Cliff Harris. Rover Eddie Pleasant just makes plays, while Troy Hill and Terrance Mitchell have come on at cornerback with Harris gone. Free safety John Boyett leads the team in tackles and needs to be an active force vs. the run.

Wisconsin offensive line: This group lacks depth and has had some issues in pass protection but will get a boost from the return of star C Peter Konz from an ankle injury. That will be a huge boost to a typical jumbo-sized Badger front that overwhelms foes with muscle, mite ? and a lot of size.

Oregon defensive line: The Ducks throw linemen on the field in waves, using as many as nine in order keep people fresh. Consequently, there is no dominating force. And that may be an issue facing a Badger front that some insiders think features three future pros.

Oregon offensive line: This isn?t a road-grading unit. Rather, the Ducks have an athletic group that?s nimble in setting the table for a quick-paced running back that calls for the ?big uglies? to be well conditioned. In fact, this is the antithesis of the massive Wisconsin lines that block the sun and rule with girth. It takes athletic lines to slow down this Duck front, which amazingly didn?t have one All-Pac-12 player. And aside from the ends, the Badgers don?t have enough playmakers.

Wisconsin defensive line: There is a lack of playmaking skills and athletic ability without E J.J. Watt. The best asset for the Badgers up front is a deep collection of tackles that go four deep, with Patrick Butrym leading the way. If you are looking for a sack or big play, keep an eye on E Louis Nzegwu.

Wisconsin special teams: The Badgers have a nice kicker-punter tandem in Philip Welch and Brad Nortman. Welch missed the first five games with a quad injury but has hit 4-of-5 field-goal attempts with a long of 52. Nortman is No. 3 in the Big Ten with a 42.1-yard average. However, Nortman has had two punts blocked, with one coming in each of the Badgers? losses. And Wisconsin has had issues covering kicks, too, ranking last in the Big Ten in kickoff coverage. And that?s bad news vs. Oregon?s speedy return men. Jared Abbrederis is a sneaky good return man who leads the Big Ten in punt returns (16.1).

Oregon special teams: Jackson Rice is one of the Pac-12?s top punters, boasting a 45.8-yard average. But kicking has been problematic since Rob Beard got hurt. Alejandeo Maldonado has been spotty, missing a game-tying field-goal attempt in a loss to USC. Bottom line is Oregon needs a field goal to win the game, it may be in trouble. LaMichael James and DeAnthony Thomas are big plays waiting to happen in the return game. Thomas leads the Pac-12 in kickoff returns (27.7) with two scores; James averages 11.2 yards on punt returns with a touchdown.