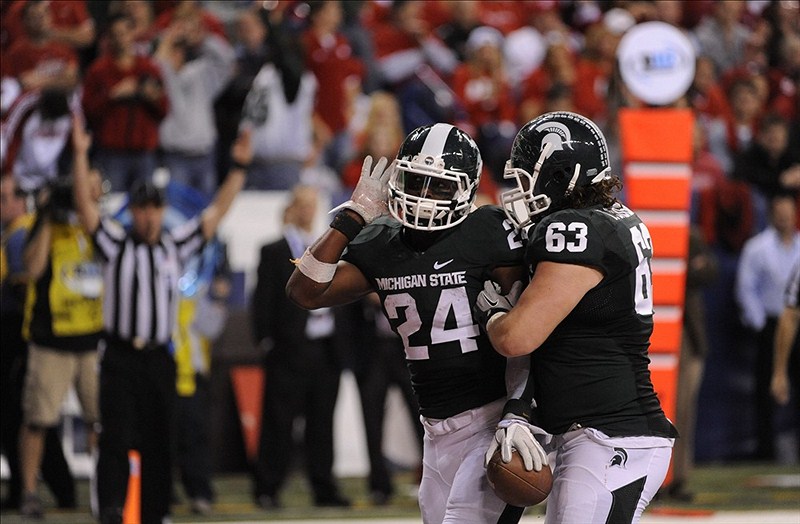 Ten wins. A Legends Division title. And no BCS bowl. For the second consecutive season, Michigan State won 10 games, claimed some kind of Big Ten title – a division crown this year – and is left on the outside looking in when it comes to the BCS. The Spartans will play Georgia on Jan. 2 in the Outback in a game that pits the Big Ten and SEC title game losers. It's also a rematch of the 2009 Capital One Bowl. BTN.com senior writer Tom Dienhart breaks down the game, gives his keys and offers his prediction. See it all in this post and find the entire 2011-12 bowl schedule.

Storyline: The Spartans enter this game with disappointment, as they invested so much in notching the school?s first Rose Bowl appearance since the 1987 season. But Michigan State came up just short in the inaugural Big Ten title game, losing 42-39 to Wisconsin. Like the Spartans, Georgia lost its league title game, falling 42-10 to No. 1 LSU for the SEC championship. It was the Bulldogs? first loss after an 0-2 start and 10 victories in succession, as Georgia coach Mark Richt probably saved his job with this big season. This will be an interesting battle between teams that have great defenses and quarterbacks.

Player of the spot: QB Kirk Cousins. Michigan State is all about the pass. Ranking second in the Big Ten (247.5 ypg). And the senior is the ultimate triggerman. Cousins has hit 65 percent of his passes for a Big Ten-high 3,016 yards with 24 touchdowns and seven interceptions. He also has the most attempts (369) and completions (240) in the conference. If he doesn?t have a big game, the Spartans won?t win. It?s that simple.

Best individual matchup: Georgia QB Aaron Murray vs. Michigan State secondary. Murray is among the better signal-callers in the nation, hitting 58.8 percent of his passes for 2,861 yards with 33 touchdowns and 12 interceptions. He loves to throw to TE Orson Charles. The Spartans have a strong secondary that allows 168.4 yards per game with a Big Ten-high 16 picks. Michigan State has a top safety tandem in sophomore Isaiah Lewis and senior Trenton Robinson. And the cornerback duo of junior Johnny Adams and sophomore Darqueze Dennard is strong, too.

Fast fact: These teams met in the Capital One Bowl after the 2008 season, a game the Bulldogs won, 24-12, behind QB Matthew Stafford in his final game with Georgia.

Three reasons to be optimistic
1. Cousins? passing. The guy can flat-out sling it. And he has a top target in B.J. Cunningham, who has 72 catches for 1,240 yards and a Big Ten-high 12 touchdown grabs. Cousins is a great leader who has proven to be clutch under pressure. Remember his game-winning Hail Mary vs. Wisconsin in October? There isn?t a defense or situation he hasn?t encountered. Cousins must look out for Georgia S Bacarri Rambo, who leads the SEC with seven interceptions.

2. Defense. No one does it better in the Big Ten. Michigan State ranks first (272.7 ypg) in overall defense. And the rushing defense is exceptional, pacing the Big Ten and ranking 12th in the nation (104.3 ypg). Junior T Jerel Worthy has been an All-American presence inside. The Spartans will be test by a Georgia passing game that ranks third in the SEC (241.2 ypg) and a rushing game that ranks fifth (172.7 ypg).

3. Pass rush. The Spartans bring the heat, which could mean trouble for Georgia QB Aaron Murray. Michigan State leads the Big Ten in sacks (3.1 pg) and is second in tackles for loss (6.8 pg). Sophomore LB Denicos Allen is a top-notch pass rusher. Sophomore E William Gholston and freshman Marcus Rush bring the heat off the edge. They must get after Murray.

Three reasons to worry
1. Can Sparty run? Michigan State ranks 11th in the Big Ten in rushing (142.9 ypg), showing sporadic production in the ground game all season. The Spartans have some good backs. Le?Veon Bell came on down the stretch and finished with 900 yards and 11 touchdowns. Edwin Baker has 655 yards rushing. But the line has struggled for consistency, as injuries and youth have been issues. More bad news: Georgia ranks ninth in the nation vs. the run (103.4 ypg). Mammoth NGs Kwame Geathers and John Jenkins stuff the middle.

2. Will Michigan State be motivated? The Spartans were crestfallen when they lost the Big Ten championship game, expending so much energy in trying to reach the Rose Bowl for the first time since the 1987 season. Michigan State entered the postseason last year with a similar psyche after finishing in a three-way tie for first place and not securing a BCS bowl berth. The result: a 49-7 loss to Alabama in the Capital One Bowl.

3. Protecting Cousins. It could be an issue facing a Georgia defense that is No. 2 in the SEC in sacks (2.6 per game) and No. 2 in tackles for loss (7.2 pg). Michigan State needs to be aware of LB Jarvis Jones, a USC transfer who leads the SEC in sacks (13.5) and tackles for loss (19.5). The Spartans also must keep an eye on LB Cornelius Washington and DL Abry Jones. This also is an opportunistic Bulldog defense that has generated 29 turnovers, second most in the SEC. If Cousins is pressured and flustered, trouble could ensue.