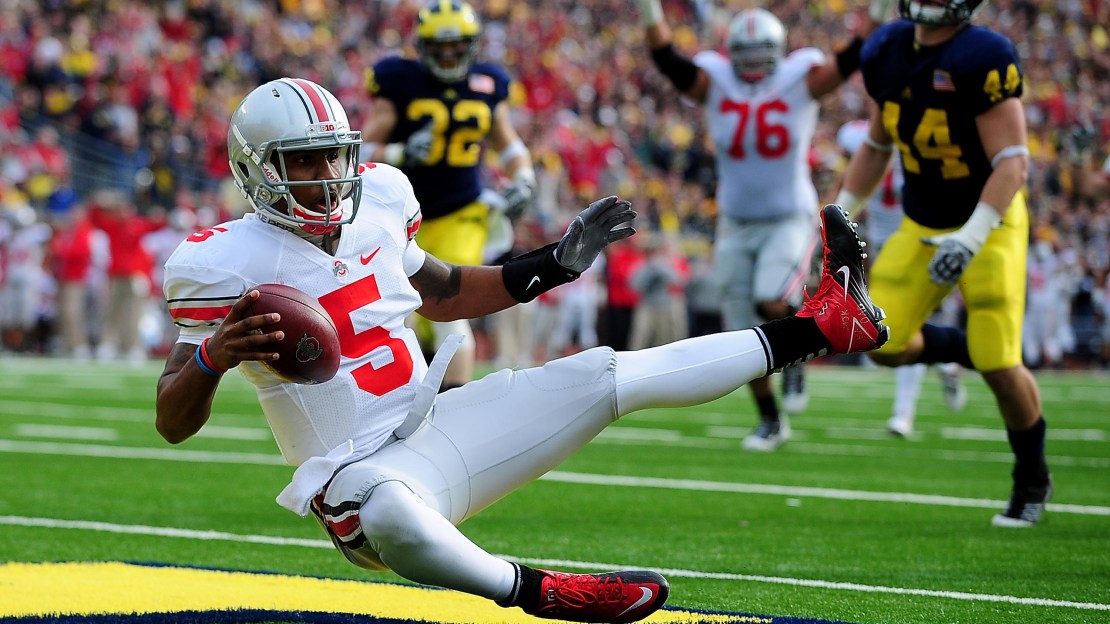 There's a good chance the Gator Bowl will be the most talked-about and viewed bowl involving a pair of six-win teams since, well, ever. The Buckeyes (6-6) are still led by Luke Fickell despite Urban Meyer's hiring, and they'll play Meyer's old team, Florida, at 1 p.m. ET Jan. 2. BTN.com senior writer Tom Dienhart breaks down the game, gives his keys and offers his prediction. See it all in this post and find the entire 2011-12 bowl schedule.

Storyline: The focus is new Ohio State coach Urban Meyer facing the program he coached for six seasons and led to two national titles. The problem: Meyer won?t coach the Buckeyes in this bowl. Instead, interim head coach Luke Fickell will lead the Buckeyes vs. first-year Florida coach Will Muschamp. Nonetheless, the chatter about Meyer will be incessant, as these two struggling powers look to end the season on an up note and gain some momentum heading into 2012. The schools met in the BCS title game after the 2006 season with Meyer leading the Gators to a 41-14 romp over the Buckeyes. Neither team brings momentum into this contest. Florida has lost four of its last six, while Ohio State has dropped three in a row. Expect a low-scoring game, as both offenses have struggled while both defenses have been good.

Player on the spot: QB Braxton Miller. He was voted the top freshman in the Big Ten, showing flashes of playmaking ability with his arm and legs after assuming starting duties in the fourth game from ineffective Joe Bauserman. He threw for 997 yards with 11 touchdowns and four interceptions, but hit only 50 percent of his passes. But Miller-a true freshman–led the team with 695 yards rushing with seven scores.

Best individual matchup: Florida DE Ronald Powell vs. Ohio State OT Mike Adams. Powell is a force off the edge that paces the Gators in sacks. Adams, a senior, is the Buckeyes? top lineman and is rounding into form after sitting out the first five games of the season due to a suspension.

Best unit matchup: Ohio State offensive line vs. Florida front seven. The Gators are filled with speed and athletic ability up front in allowing 132.3 yards rushing per game and just 3.4 yards per rush, though the group struggled a bit down the stretch. Still, Florida will pose a threat to the Buckeyes? strong ground game and an Ohio State front led by C Michael Brewster and T Mike Adams. Making the job more difficult for the Buckeye blockers will be the fact Florida knows Ohio State will want to run to open room from a poor passing game.

Three reasons for optimism:
1. Rushing game. While the passing game has been spotty, Ohio State?s rushing attack has ranked with the best in the Big Ten, sitting fourth in the league with a 195.7-yard average. After senior RB Dan Herron returned from a six-game suspension, he led the way with a tough, physical style. Look for Ohio State to try to batter Florida with Herron and then hit the Gators with the speedy and slashing junior Jordan Hall.

2. Defense. This is a strong unit that ranks 24th in the nation (328.6 ypg) and allows only 20.8 points per game. DE John Simon sets the pace up front with a relentless style and super strength. The junior has 15 tackles for loss and seven sacks. LB Ryan Shazier has been a revelation as a true freshman, starting the final two games of the season. A native of Florida, he originally committed to the Gators coming out of high school but flipped to Ohio State after Urban Meyer stepped down.

3. Impress the new boss. Auditions for 2012 begin right here, and the players know it. This is a chance to show new coach Urban Meyer what they have as the program looks to battle through NCAA probation under Meyer in hopes of regaining its status as the Big Ten?s premier program that won at least a share of each title from 2005-2010. No Big Ten program ever won more league titles in succession.

Three reasons for worry:
1. The passing game. Ohio State has struggled under QB Braxton Miller, who hits just 50 percent of his attempts. Ohio State?s aerial game ranks last in the Big Ten and 117th in the nation (124.1 ypg). It?s no secret: Florida will commit to stopping the run. Can Miller make the Gators? pay? Senior WR DeVier Posey is a deadly weapon, as TE Jake Stoneburner is effective. The good news: Florida?s offense hasn?t been much better under QB John Brantley, ranking eight in the SEC (334.2 ypg) and seventh in scoring (25.6 ppg).

2. Lack of playmakers. There aren?t a lot of scary options on this offense who keep defensive coordinators awake at night. Yes, Miller can break off a long run at any time. And WR DeVier Posey has injected a big-play element since returning from a 10-game suspension.

3. Secondary. It?s talented but filled with inexperience. CB Travis Howard is the leader and top playmaker, while S C.J. Barnett paces the team with 69 tackles. Fellow S Orhian Johnson has come on strong down the stretch. This group must be aware of speedy Florida RBs Chris Rainey and Jeff Demps, being mindful to maintain containment to limit big plays. If the Gators get the edge, they could go all the way.