Dienhart: Breaking Down the Insight Bowl 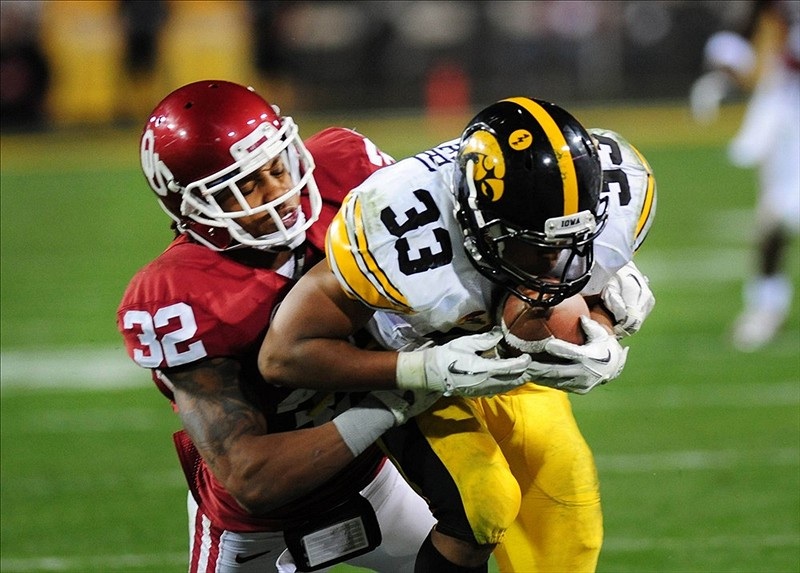 Iowa fell to Oklahoma 31-14 in Friday night's Insight Bowl and the Hawkeyes really missed RB Marcus Coker, who was suspended earlier this month for breaking team rules. Coker was the nucleus of the Hawkeye attack, ranking 14th in the nation in rushing (115.3 ypg) with 15 touchdowns. Iowa went with a running back-by-committee approach that had mixed results, running 37 times for 76 yards (2.1 ypc). My pregame prediction was Oklahoma 34-21 – not too shabby – but I also learned a few things from this game.

1. QB James Vandenberg is good-and only will get better in 2012. The junior made progress all season in his first year as a starter. And he capped his season with a gutsy effort in the Insight Bowl. Vandenberg hit just 9-of-20 passes for 89 yards with an interception in the first half. But he finished 23-of-44 for 216 yards with two touchdowns and a pick. Rebounding from adversity is a tremendous asset.

2. Iowa will miss defensive coordinator Norm Parker. He was the lone coordinator Kirk Ferentz has had since taking over Iowa in 1999, forging a reputation as one of the best in the business. Parker?s unit limited Oklahoma to 275 yards, sending him out on a high note despite the loss.

Key moment: Iowa was riding a wave of momentum, rallying from a 21-0 hole to make it 21-14 with less than 10 minutes to go in the game. But the Sooners took the ensuing kickoff and marched down for what proved to be a game-clinching 35-yard field goal.

Key stat: 0, the number of points Iowa scored the first three quarters. That extended the Hawkeyes? scoreless streak to seven quarters. It was too big of a hole for Iowa to crawl out of.

Sneak peek to 2012: While 2011 may have been a disappointment, next season could be special. Yes, the offense will miss WR Marvin McNutt, but the other top skill position players are back led by QB James Vandenberg. And it?s presumed RB Marcus Coker will be back from suspension. There will be more work to do on a defense that will need to replace four players on the front seven and two defensive backs.