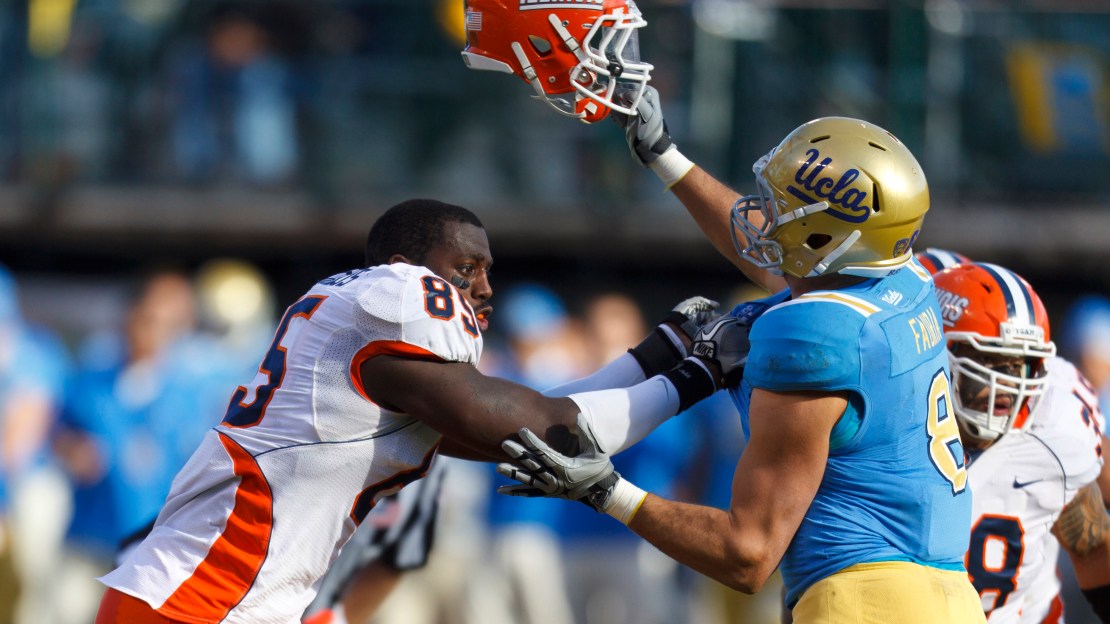 (AP) Terry Hawthorne returned an interception 39 yards for Illinois' first touchdown late in the third quarter and the Illini snapped a six-game losing streak by beating UCLA 20-14 in the Fight Hunger Bowl.Nathan Scheelhaase added a 60-yard touchdown pass to A.J. Jenkins midway through the fourth quarter to seal the first victory for Illinois (7-6) since beating Indiana 12 weeks ago. The game between two six-win teams who have already fired their head coaches matched the underwhelming expectations as there was little excitement before Hawthorne's third-quarter touchdown that gave Illinois its first lead. UCLA (6-8) was held to 18 yards rushing in its third straight loss. Read the full AP recap, get Tom Dienhart's reaction, see the box score and view our photo gallery.

FINAL: Illinois took home a 20-14 win over UCLA thanks to the chemistry between Nathan Scheelhaase and A.J. Jenkins, who led the passing attack for Illinois (7-6) on Saturday at AT&T Park. The teammates combined for five completions for 74 yards. Despite facing a 13-point deficit, UCLA (6-8) closed to within striking distance of the Fighting Illini late, but Illinois survived the comeback attempt and secured the win. The Bruins' ground game was halted by the Fighting Illini's impenetrable defense. Illinois sealed the running lanes, and UCLA ended up gaining only 19 yards on the ground. The Fighting Illini's defense was stifling as they shut down Illinois' offensive attack. The Fighting Illini's defensive unit stood firm against the Bruins' offense, holding UCLA to 220 total yards. The Bruins' Kevin Prince was good for 201 yards during the game, completing 13 of 28 passes. Prince finished the game with two touchdowns and one interception. Joseph Fauria was the player Prince targeted most often. He hauled in five catches for 36 yards. Scheelhaase threw for 139 yards while going 18-30 for Illinois. He threw one touchdown and one interception. Scheelhaase also ran for 110 yards on 22 attempts. The Fighting Illini's offense finished the game having gained 327 yards, including 148 passing yards on 19 completions. Rushing was a key ingredient in Illinois' offensive mix, bringing it 179 yards on 43 carries.

FOURTH QUARTER: Illinois put on a defensive clinic in the fourth, as UCLA finished with negative rushing yardage (-10 yards), and the Fighting Illini kept the Bruins at bay for a 20-14 victory. Illinois opened up the lead, 13-7, after Derek Dimke kicked a 36-yard field goal to end a six-play, 47-yard drive. The Fighting Illini's drive was highlighted by Nathan Scheelhaase's 37-yard run. Illinois made its lead 20-7 when Scheelhaase threw a 60-yard touchdown pass to A.J. Jenkins on the last play of a five-play, 74-yard drive. UCLA put the finishing touches on an 84-yard drive when Kevin Prince and Nelson Rosario combined for a 54-yard touchdown to make the score 20-14. The Bruins' Prince topped 200 yards passing for the game in the quarter, and finished his day with 201 yards through the air. The Fighting Illini's Scheelhaase hit 100 yards rushing for the game in the quarter, part of his 110-yard rushing performance.

THIRD QUARTER: Nathan Scheelhaase had a productive quarter for Illinois. He threw for 33 yards and ran for 27 yards, and the Fighting Illini have taken the lead 10-7. Illinois has scored 10 unanswered points. The Fighting Illini made the score 10-7 when Terry Hawthorne intercepted a Kevin Prince pass and returned it for a touchdown. Illinois has possession on its own 38-yard line to start the fourth quarter.

SECOND QUARTER: UCLA's Taylor Embree led the offense in the second quarter. He caught a 16-yard touchdown pass, and the Bruins now lead 7-3. UCLA took the game's first lead after on the last play of a four-play, 44-yard drive. The Bruins began the drive with good field position after Illinois failed to convert on fourth-and-1. The Fighting Illini closed the gap to 7-3 when Derek Dimke kicked a 35-yard field goal to cap a 12-yard drive. Illinois squandered an opportunity to score a touchdown, missing a chance to score from UCLA's three-yard line before settling for the field goal. A fumble recovery by the Fighting Illini set Illinois up at the Bruins' 30-yard line to start the drive. The Fighting Illini threw just one time on that drive. Illinois will get the ball to start the second half.

FIRST QUARTER: The first quarter saw both teams combine for no points and one turnover and the game is tied 0-0 at the end of the first quarter. The Illini won the first down battle, 4-1, and have outgained the Bruins 66-44. Illinois will start the second quarter with the ball at its own 26-yard line.