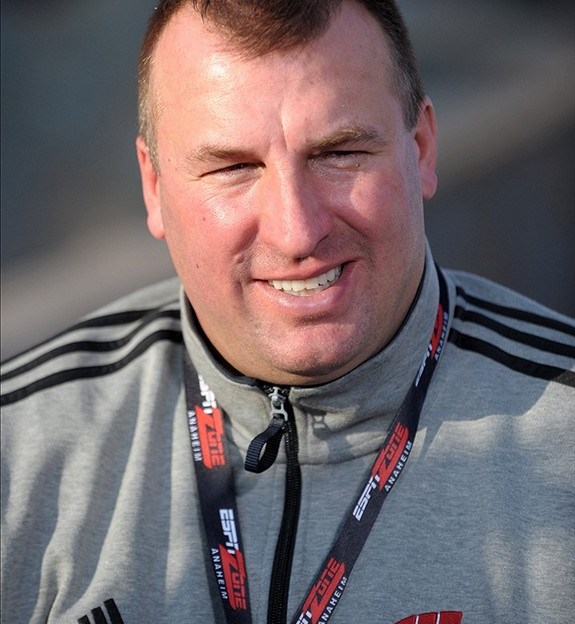 LOS ANGELES — It?s good to be Bret Bielema, the Wisconsin football coach who is riding a wave of success that has seen him and the Badgers win consecutive Big Ten titles. And off field, life is even better, as the long-time bachelor is going to get married in March.

But something?s missing from Bielema?s resume: A Rose Bowl victory. He will have a chance to add that to his resume on Jan. 2 when the Badgers play Oregon.

?I'm very excited with the way they've kind of approached the Oregon prep to this point locking in,? said Bielema. ?I know I read from some of your comments or things I read in the media about our guys just kind of focusing in. Last year was a nice trip, we took advantage of it, but this year they want to go out and finish things off better than they did a year ago, so we are excited about that.?

?Without a doubt,? he said. ?No disrespect to TCU, but we thought it was a game, if we play better and execute better, we probably would have won. To be that close and not be able to finish the victory was very disappointing. Someone asked (wide receiver) Nick Toon in Chicago (at Big Ten media days) when he got over it. And he said he hadn't.?

It wasn?t that long ago that doubt clouded Bielema?s ability. Was he really a worthy heir to Barry Alvarez?s throne?

Alvarez was an icon, establishing Wisconsin as Big Ten power during a reign from 1990-2005 that produced a 118-73-4 mark with three Big Ten championships and three Rose Bowl triumphs. But Alvarez surprised some when he tabbed Bielema to be his successor after the 2005 season, remaining on as Wisconsin athletic director.

Bielema, who will turn 42 on Jan. 13, never had been a head coach. He began his career as a G.A. at Iowa, his alma mater, in 1994-95 and ascended to linebackers coach of the Hawkeyes from 1996-2001. Bielema moved on to be defensive coordinator at Kansas State from 2002-03 before Alvarez hired him to run Wisconsin?s defense in 2004 after Bielema has contemplated joining Auburn as coordinator.

Bielema soon thereafter was named Alvarez?s successor and has validated the decision with myriad accomplishments. And now, six seasons into this tenure and with Penn State?s Joe Paterno and Ohio State?s Jim Tressel no longer in the league, Bielema is arguable the top coach in the Big Ten-and one of the looming forces in the nation. Look at a few of the glowing numbers from Bielema?s dossier:

–    Wisconsin has posted a 32-7 record (.827 winning percentage) the past three seasons, the sixth-best record in the nation over that span.

–    Wisconsin is playing in a second Rose Bowl in a row after winning its second Big Ten championship in a row.

Not bad for a kid from Prophetstown, Illinois, a tiny burg in the west central part of the state. But, again, a Rose Bowl triumph remains elusive for Bielema. In fact, he?s just 2-3 in bowl games, which pales compared to Alvarez?s 8-3 mark in the postseason that includes a 3-0 mark in the Rose Bowl. And the program?s ascent can be traced to Alvarez?s first trip to Pasadena that resulted in a win over UCLA after the 1993 season.

?Well, I was at (Iowa) at the time (of the 1993 Rose Bowl), and I remember watching the Rose Bowl in the hotel room of my head coach I was working for, Hayden Fry, at the time,? Bielema said. ?We were at another bowl game. I read through (our) press release and the numbers are ridiculous. I mean, other than USC, we're the most-represented team in the country to the Rose Bowl since the BCS (began). I think USC has got five, this is our fourth.

?For us personally, I can't tell you just in traveling over the last month with recruiting, since, really since the championship game, how many people come up — and I think we?ve got a lot of fans across the country — and say, hey, they love the way we play, the way our kids represent, the way that we come across on a national exposure. In my time being here, it's at an all-time high, and I think Coach (Alvarez) would probably agree with you, since that point it's at an all new high right now.?

Bielema?s quest to be Rose Bowl champion won?t be easy against a speedy Oregon team that plays at a lightning tempo.

?Well, it's a task,? said Bielema. ?I don't get into degrees of difficulty, but you have a unique preparation. One point of emphasis I've made to the kids is we?ve got extended prep for this game, which is critical. And you look at some of the games that (Oregon) played with extended prep, three years ago the Rose Bowl, this year beginning of the year with LSU. Last year at the end of the year and their bowl game.

?So there are several things that you can kind of draw from that. These guys will be very hard to play within a week. If you got done with a game on Saturday and you had to get ready for (them), I think it would be a very difficult challenge. But the extended prep and the opportunity to kind of slow things down a little bit mentally is going to be great. I appreciate and like the fact that a lot of people don't have a lot of confidence in what we're able to do.?

Bielema has been under scrutiny before. After debuting with a 12-1 overall record and 7-1 Big Ten mark in 2006 and following that with a 9-4 mark overall and 5-3 in conference play, Bielema slipped to 7-6 in 2008 with a 3-5 mark in the Big Ten and finished with an ugly loss to Florida State in the Champs Sports Bowl.

"Is Bret on the hot seat?" said Alvarez, who was repeating a question I had asked prior to the 2009 season. "I wouldn't say he's on the hot seat. What happens if he goes 7-6 again? I think it depends on how you go 7-6. If it's coaching mistakes, it's different than if you lose tough ball games. Guys are playing solid football."

Three years, 32 victories and two Big Ten titles since that Alvarez statement, Bielema is on a roll that could end with a Rose Bowl title-finally.

Tom Dienhart is a senior writer for BTN.com and in Pasadena to cover the Rose Bowl. Find all of his work at www.btn.com/tomdienhart, follow Dienhart on Twitter at @BTNTomDienhart, send a question to his weekly mailbag here, and click here to subscribe to his RSS feed.