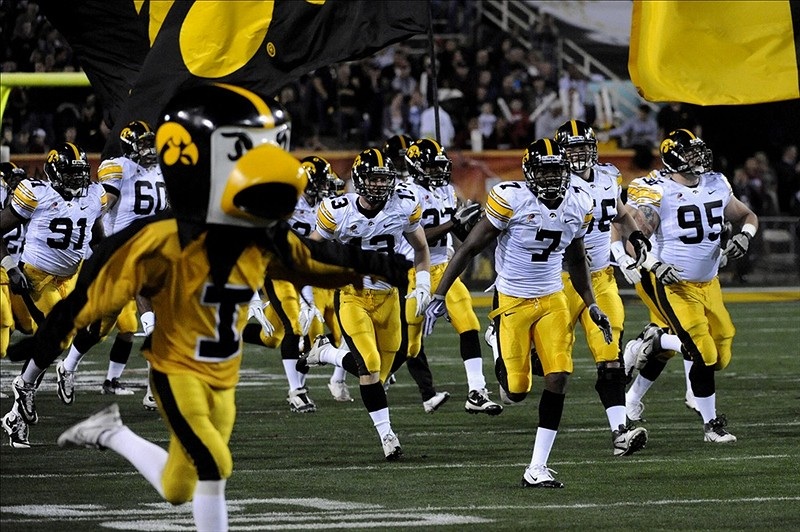 Blake Bell ran for three touchdowns to help No. 19 Oklahoma survive a late rally and a crashing camera to beat Iowa 31-14 in the Insight Bowl Friday night. Iowa (7-6) fell into a 21-0 hole before rallying behind two touchdown passes from James Vandenberg. The Hawkeyes came up just short and dodged a potential disaster when an overhead camera crashed to the field next to receiver Marvin McNutt in the closing minutes (see photos of the crashed camera). Jump inside for links to stats and recaps for each quarter of the Insight Bowl.

Iowa was only able to manage 292 total yards against No. 19 Oklahoma's ferocious defense, and Oklahoma (10-3) ended up with a 31-14 victory on Friday at Sun Devil Stadium. Blake Bell carried the offensive load for the Sooners, piling up 51 rushing yards and three touchdowns on 10 attempts. Jordan Canzeri did his best to carry Iowa's (7-6) offense, turning 22 carries into 58 rushing yards. Landry Jones threw for 161 yards while completing 16 of 25 passes for Oklahoma. Jones finished the game with one touchdown and one interception. The Sooners' offense finished the game having gained 275 yards. Oklahoma's rushing attack contributed 114 yards on 37 carries in addition to Jones' passing effort. The Hawkeyes' James Vandenberg was good for 216 yards during the game, completing 23 of 44 passes. Vandenberg tossed two touchdowns and one interception. Vandenberg had a good connection with receiver Canzeri. He caught six passes for 28 yards and one touchdown.

FIRST QUARTER: In the first quarter, the Sooners' Blake Bell stood out. He ran for four yards and one touchdown, and Oklahoma leads 7-0 at the end of the first quarter. The Sooners took the game's first lead after Bell took a quarterback draw all the way for a four-yard touchdown run on the last play of a two-play, five-yard drive. The Hawkeyes have possession at Oklahoma's 47-yard line to start the second quarter.

SECOND QUARTER: Iowa's run game never got out of the backfield in the second, as Oklahoma held the Hawkeyes to -3 rushing yards, and the Sooners now lead 14-0. Oklahoma opened up the lead, 14-0, after marching down the field for a nine-play, 66-yard drive that ended when Blake Bell took a quarterback draw all the way for a four-yard touchdown run. The Sooners will receive to start the second half.

THIRD QUARTER: Oklahoma sniffed out Iowa's rushing attack in the third quarter, holding the Hawkeyes to 21 rush yards and the Sooners now lead 21-0. Oklahoma expanded its lead to 21-0 thanks to a 10-play, 64-yard drive that ended when Landry Jones and Trent Ratterree combined for a three-yard touchdown. Iowa is in a prime position for points on the Sooners' one-yard line to open the fourth quarter.

FOURTH QUARTER: Iowa's James Vandenberg led the offense in the fourth quarter. He threw for 86 yards and two touchdowns and ran for five yards, but the Hawkeyes couldn't come back, falling 31-14. Oklahoma closed the game on a 10-point run. Iowa put the finishing touches on a 75-yard drive when Vandenberg found C.J. Fiedorowicz open for a five-yard touchdown pass to make the score 21-7. The Hawkeyes made the score 21-14 after Vandenberg and Jordan Canzeri combined for a nine-yard touchdown to finish off a 78-yard drive. The Sooners expanded their lead to 24-14 thanks to a nine-play, 44-yard drive that ended when Michael Hunnicutt drilled a 35-yard field goal. Oklahoma opened up the lead, 31-14, after Blake Bell took a quarterback draw all the way for a 21-yard touchdown run to end a four-play, 30-yard drive. Iowa's failure to convert on a fourth-and-4 set the Sooners up to start the drive. The Hawkeyes' Vandenberg hit 200 yards passing for the game in the quarter, part of his 216-yard passing performance.