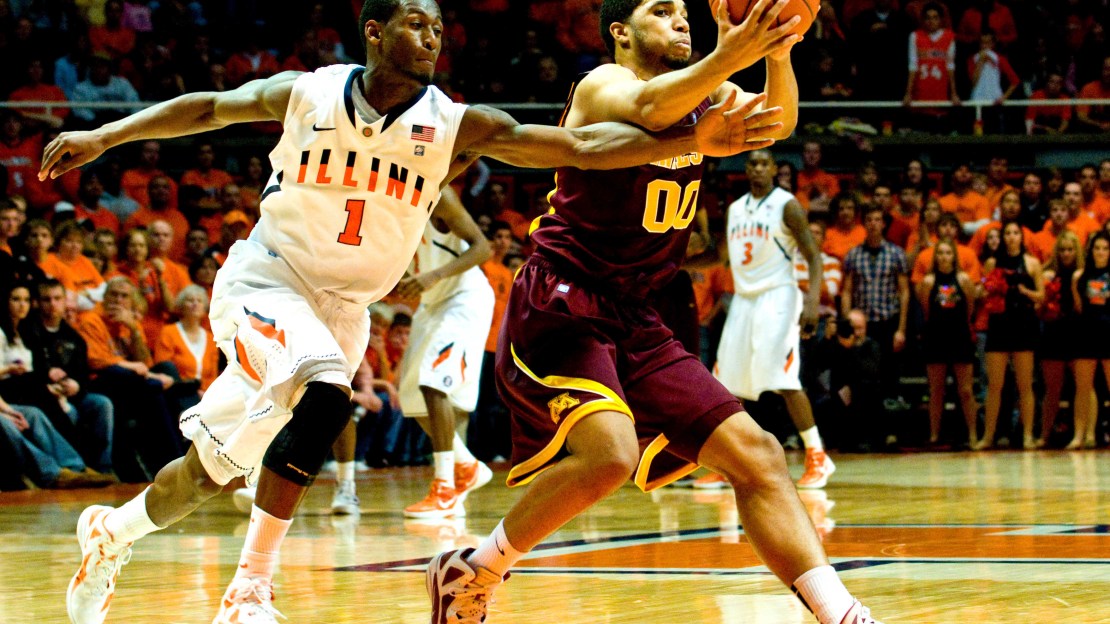 And they're off! Conference play began last night, and we've already been treated to a close game and a Wisconsin blowout–two things we'll probably see plenty of over the next two-and-a-half months. Let's get to the details.

In the first B1G conference game of the season, Illinois and Minnesota played an entertaining–if not always well-played–double-overtime thriller. Late in the first half, it started to look like the Illini would run away with the game, taking a 13-point lead before a banked three by Rodney Williams cut it to 10 at the break. Still, Illinois put together a very nice half of basketball that, when combined with the second half against Missouri, should have had fans very excited about this team's potential.

Early in the second half, however, we saw one of Illinois' patented offensive meltdowns, leading to a 10-0 Minnesota run that brought the Gophers right back into the game. During that run, Bruce Weber's team had four turnovers in five straight possessions, allowing Minnesota to get run-outs and easy buckets.

It was back-and-forth for the rest of regulation, but Minnesota ended up possessing a two-point lead with 16 seconds remaining and Julian Welch at the line for a one-and-one opportunity. Welch, a career 80 percent free throw shooter, missed the front end, giving Illinois unexpected–and possibly undeserved–life. Meyers Leonard, who had made an inexplicable turnover the previous possession, would draw a foul and knock down both free tosses, sending the game to overtime.

Both teams struggled to score in the first extra session, then Illinois put together perhaps their best defensive stretch of the game to pull away in the second overtime. The efficiencies posted by each team break down as follows:

Illinois played quite well in all areas except one: turnovers. A turnover rate of 26 percent dragged down an offense that was otherwise quite efficient. Minnesota was basically in the opposite situation, as they shot just 40 percent on twos and 29 percent on threes but stayed in the game by limiting their miscues.

As with any double-overtime game, this was one where fans of either team could point to specific events as being lucky or unlucky–and possibly game-changing–for their team. If Williams doesn't bank in that three at the end of the first half, Illinois might have won 64-61 in regulation (exactly as the KenPom ratings predicted). If Welch knocks down two free throws instead of missing the front end, Minnesota probably wins in regulation. These examples help explain why we mostly look at close game performance as being random. Either team could have won this game, and it wouldn't have necessarily said anything more about their abilities than the opposite result does.

That said, wins and losses are what matter in March, and this is a big victory for the Illini. A home loss to what will probably be a bubble team would have put Illinois behind the eight ball right from the start. Instead, these Illini move on with plenty of things to fix but with another win on their resume.

Minnesota has shown well since losing Trevor Mbakwe, and playing Illinois to a virtual stalemate in Champaign is another data point suggesting the Gophers won't be sinking to Iowa or Penn State levels any time soon.

In the night's other action, it was a red and white extravaganza as Nebraska hosted Wisconsin in the Huskers' first-ever Big Ten game. The home crowd was jubilant as Nebraska jumped out to a 7-0 lead, but the Badgers then made like an Andalusian tribe in setting the lay of Nebraska alight. Wisconsin cruised to a 24 point win with a dominant performance at both ends. Don't worry, Nebraska fans–it happens to just about everyone at some point.

This one was extremely slow, as the 51 possessions were even fewer than expected. This tempo masked an incredibly efficient showing from the Wisconsin offense–the 1.25 points per trip is the most surrendered by Nebraska all season. Ryan Evans scored 22 points on 11 shots without turning it over once.

Tonight, we are graced with a tripleheader on BTN:

Obviously, the most interesting of these is the matchup of ranked teams in East Lansing. Michigan State gets a chance to show just how good their defense is against an Indiana team that hasn't been held under a point per trip all season (but also hasn't faced a good defense away from Assembly Hall). The other games should be attention-worthy as well–does Northwestern have a prayer of slowing down Ohio State's offense? Can Purdue avenge last season's loss in Iowa City? We should be in store for a nice night of hoops.