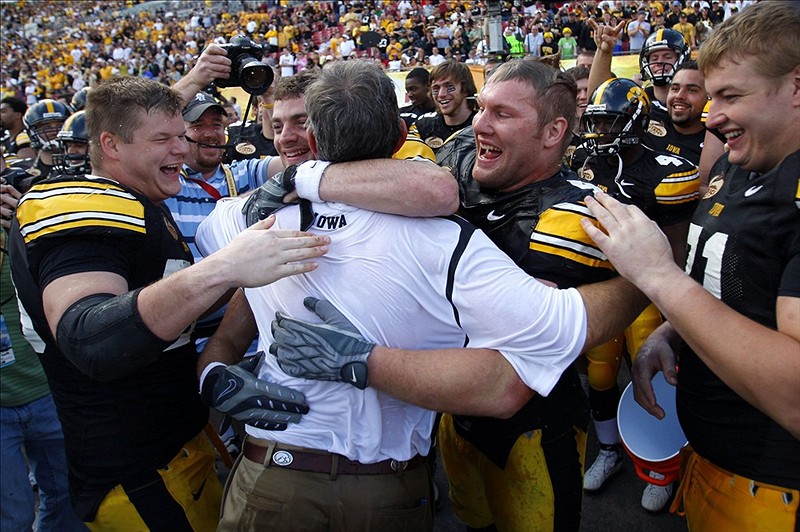 The time is now for the Big Ten. It?s bowl season. And it?s a chance for the Big Ten to make amends for a rugged 2010 postseason, especially a New Year?s Day that left the Big Ten with a hangover. It all began with Northwestern getting tripped by Texas Tech, 45-38, in the TicketCity Bowl. And the hits kept on coming on one of the darkest bowl game days in Big Ten annals.

Five bowls. Five losses. All on the high holy day of the bowl season with the entire nation watching.

But another year brings a chance for redemption for the Big Ten. The conference has a league-record 10 teams in the postseason, so there will be ample opportunity to impress.

The bowls that will matter most in the eyes of many across the nation will be the ones that pit the Big Ten vs. the SEC.
It?s like Coke vs. Pepsi or Microsoft vs. Apple. The Big Ten and SEC are the country?s top conferences and always will be compared and used as measuring sticks against each other. And like it or not, the bowls are when conferences forge their reputations.

The problem for the Big Ten: The SEC is riding a wave of tremendous success that has it on top of the college football world. The SEC is guaranteed a sixth BCS national championship with Alabama playing LSU in the BCS title game on Jan. 9.

The Big Ten? It hasn?t won a national title since Ohio State pulled a colossal upset of Miami after the 2002 season. The Buckeyes got back to the title game after the 2006 and 2007 seasons but lost on each occasion to Florida and then LSU, lopsided defeats that damaged the national perception of the Big Ten.

In the last ten seasons, the Big Ten and SEC have met in 25 bowls with the SEC holding a 13-12 edge. Not as lopsided as you think, right?
But the Big Ten has struggled the last four bowl seasons going 4-7 against SEC teams. Last year the Big Ten went 1-3 vs. the SEC. And the one victory (Ohio State over Arkansas in the Sugar Bowl) later was vacated by the Buckeyes are part of NCAA sanctions.

The reason for the SEC?s dominance? Most point to speed.

"Each league has teams with deep-rooted traditions and passion," said Ted Roof, who was defensive coordinator at Minnesota (2008) and Auburn (2009-11) before taking the same job with Central Florida a few weeks ago. "But probably the biggest difference would be team speed. In the SEC, every school has defensive linemen with speed who can run and get off blocks. That?s what the SEC is about. It?s a speed league. Speed on the defensive line is a factor. But overall team speed is the key."

"I think the SEC is faster,? said Wolford. ?"Coaching in both leagues and the offensive line in particular, what I noticed when we were at Illinois we were able to get some top-tier offensive linemen who could go anywhere in the nation."

"But I think the best defensive linemen in the nation, no matter what region they are from, wanna play in the SEC. At Illinois, I felt we were on a pretty even playing field with Ohio State, Michigan, Wisconsin, Iowa as far as my offensive line matching up with their defensive line. There might be one or two (defensive linemen on the other team) who make you nervous. In the SEC, every team has them. And they are good enough to embarrass you."'

But is the SEC really injected with that much more speed than the Big Ten?

"Since I have been coach, we have played Auburn and Vandy," said Northwestern coach Pat Fitzgerald. "I would say (the speed) was similar to the teams we played in this league. I didn?t walk off the field after playing those teams thinking, 'Wow.' I didn?t feel that way at all. They were very good but … "

"Fifteen years ago, I totally get it," said Bielema, who is 2-2 vs. the SEC. "Now, 1-85 (scholarships), they probably have more speed. But you can only put 11 guys out there last time I checked. I think a lot of us have caught up in that regard."

The Big Ten hasn?t just struggled against SEC tams in recent years. It has struggled with most leagues in the postseason over the past five seasons, boasting a 13-24 record. And the conference is just 3-7 in BCS bowls in that span. Conversely, the SEC is 29-15 in all bowls and 8-2 in BCS bowls from 2006-2010.

The critics have had a field day.

And now seven of the Big Ten's ten bowl teams enter the bowl season as underdogs. The lone favorites: Purdue over Western Michigan in the Little Caesar?s Bowl, Illinois over UCLA in the Kraft Fight Hunger Bowl, and Michigan over Virginia Tech in the Sugar Bowl. The SEC is favored over the Big Ten in each of its three meetings.

Still, the debate on whether speed is the reason for the SEC?s dominance over Big Ten will continue.

"I think football goes in cycles," said Bielema. "Again, I don?t think the speed difference is that big. In fact, I would like the opportunity for our team now to play an SEC team. I watched that LSU-Alabama game, and I think we would match up well with them because I think our offense would score points. And I think our defense would play well against their style of offense."

"Why do I think we would match up well with LSU and Alabama? The ability we have at the three critical positions: quarterback, running back and receiver. What we found, a lot teams we play in bowls have a difficult time defending our tight end passing game. It?s unique and not a common system. Things like that would benefit us."

The Big Ten is looking for any edge it can get in search of a successful bowl season.

What do you think about the Big Ten's chances in the bowl games this year? Tell us below. Tom Dienhart is a senior writer for BTN.com. Find all of his work at www.btn.com/tomdienhart, follow Dienhart on Twitter at @BTNTomDienhart, send a question to his weekly mailbag here, and click here to subscribe to his RSS feed.