Big Ten Geeks: Wrapping It Up 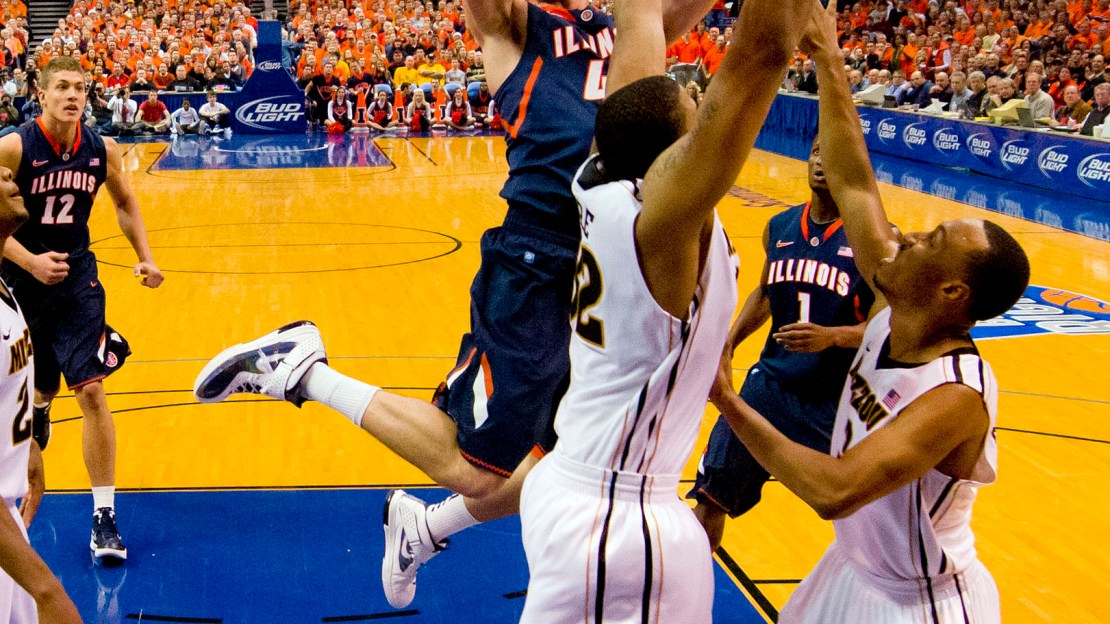 Wednesday's and Thursday's games marked the end of non-conference play for many Big Ten members. With the holiday break looming, let's run down who has been naughty and nice.

It wasn't easy, but Penn State handled a pesky Cornell squad by seven points. This was basically a three-point shooting contest, and the Big Red jumped ahead early by making those deep shots. The Nittany Lions were able to stay in the game by virtue of their offensive rebounding, and they finally took control late in the second half when their own threes started to fall. Cammeron Woodyard came up big off the bench, burying three second half triples and making his free throws down the stretch. Tim Frazier didn't play his best game, but he still finished with 17 points, 11 rebounds, and six assists (five turnovers). He also showed his vertical with an insane block of Cornell's 6-9 backup center.

Penn State is now finished with non-conference play at 8-5, and the only truly bad defeat is the home loss to Lafayette. They currently sit at 142nd in the KenPom rankings: After a few games, Penn State was looking like they might sneak into the top 100, but things got worse from there. The past two games have improved their standing a bit, and the Nittany Lions are now projected to go 4-14 in B1G play. As far as rebuilding seasons go, it could be worse (see Indiana 2008-09).

Illinois used a fantastic second half to very nearly upend Missouri in the annual Braggin' Rights game. In the first half, Missouri imposed their will, knocking down half of their threes and forcing turnovers on 26 percent of Illinois possessions. The result was an 11-point halftime lead that felt like it should have been larger. Then things turned around after the break:

In the second half, Illinois cranked up the offensive efficiency by shooting 64 percent on twos and grabbing half of their misses. Joseph Bertrand was a revelation off the bench, scoring 19 points on nine-of-nine shooting. Meanwhile Missouri was taking quick threes and missing them, allowing the Illini to seize a two-point lead with two minutes remaining. Illinois' execution down the stretch was lacking, including two Brandon Paul turnovers, and Missouri pulled out a four point win.

For the game, Illinois scored 1.02 points per trip. That may not sound like a lot, but it's actually the second-highest output surrendered by Missouri all season (Villanova was just slightly higher). For a team that has recently struggled to score against the likes of St. Bonaventure and Cornell, it was a welcome return to adequacy. If Illinois can play like that all season, they shouldn't have trouble making the NCAA Tournament.

Michigan had a tough time with an upstart Bradley team, eventually pulling away in a game that was tied with under 15 minutes left. The problem was on the defensive end, where the Wolverines allowed a point per possession to a team that had eclipsed that mark only three times all season.

It's remarkable that Michigan hasn't lost anything on the offensive end without Darius Morris, but the defensive dropoff is hard to figure. Was Morris really that good of a defender? Shouldn't all those freshman-to-sophomore leaps result in a better defense? It's something to watch going forward, and it could determine if Michigan has a special season or ends up on the bubble.

Minnesota got off to a horrific start against North Dakota State, trailing 14-2 early, but the Gophers were able to come back and secure a four point win. The margin could have been larger had Minnesota shot a little better at the free throw line–they made just 63 percent of their 24 attempts.

On a night when Austin Hollins and Julian Welch really struggled (a combined three for 12), the frontcourt carried the team. Ralph Sampson and Rodney Williams combined for 29 points, 14 rebounds, four steals, and four blocks.

North Dakota State isn't an awful team, so the small margin of victory shouldn't set off too many alarms. This Gopher team has done a fantastic job of adjusting to life without Trevor Mbakwe, and they enter B1G play next week with their at-large hopes still intact. They've managed to move up from 48th to 45th in the KenPom rankings since the Dayton game.

Michigan State struggled a bit with a surprising Lehigh team, but a 20-6 run early in the second half allowed the Spartans to take control and cruise to a nine point victory. For the second straight game, it was the Michigan State offense that was impressive, as they posted 1.19 points per trip on a decent enough defense.

Keith Appling struggled from the field, as did his whole team, but he knocked down all 12 of his free throws to finish with 19 points. Offensive rebounding was a huge factor as the Spartans grabbed over half of their misses.

Northwestern missed a golden opportunity in losing by eight at Creighton. This was a back-and-forth game until the Bluejays made a run around the 14 minute mark. Creighton's offense, which is one of the nation's best, was just unstoppable, posting 1.27 points per trip. Northwestern had a decent scoring night themselves at 1.16 points per possession, but it wasn't enough to keep it close. Drew Crawford had an incredible night, scoring 34 points before fouling out.

In the blowout category, Indiana and Ohio State had no problems with a couple cupcakes. For most of the conference, this wraps up the non-conference slate (save for a couple one-offs during B1G play). It's been a highly successful month and a half, as the Big Ten is regarded by many to be the nation's best conference. Now comes the really fun part of seeing these teams square off.  Happy holidays everyone–B1G play starts on Tuesday!