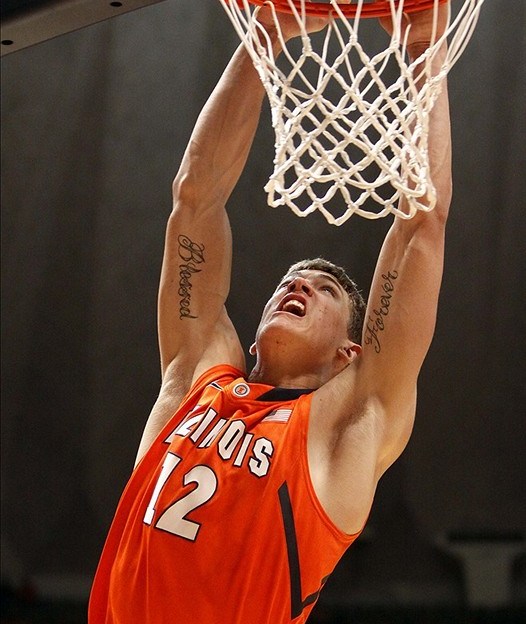 Illinois once again put on a dismal offensive display against Cornell. Things started out well, with Bruce Weber's team taking a 10-3 lead out of the gate, but the offense completely fell apart from there. But we've seen numbers like this from Illinois before:

It's nice that the Illini were able to crank up the efficiency down the stretch and avoid a bad loss, but this makes it three out of four games in which their offense was putrid for long stretches. As a reminder, here's the numbers from the St. Bonaventure game:

UNLV held the Illini to just 0.67 points per trip for the entire game. This offense is broken right now, outside of a few timely bursts of life, and there's very little time to fix it with a game against Missouri looming on Thursday.

One glaringly obvious weakness over this rough patch has been the play of the Illinois bench. Against Cornell, seven bench members combined for the following statline:

If one player put up those numbers, everyone would be asking why he's even on the team. To be fair, this group includes five freshmen and two inexperienced sophomores, so it's possible they are hitting the proverbial wall with the semester coming to an end. Regardless, Illinois absolutely must get something out of its bench going forward if it hopes to be a tournament team.

Nebraska nearly blew a double-digit lead but managed to hang on late in a slow-paced shootout against Central Michigan. The Chippewas posted their highest efficiency of the season at 1.15 points per trip, showing once again that this Nebraska defense isn't nearly as good as we expected it to be. Last season, the Huskers made it into January before they allowed over a point per possession; this season, it's already happened three times.

The defensive dropoff is a bit surprising, as Nebraska returned most of its rotation from a season ago, but the numbers may tell us why it is happening. Check out some of the key defensive stats for the Huskers compared to last season:

Nebraska is forcing slightly more turnovers and rebounding slightly worse, so those two factors should cancel each other out. Clearly the difference is in field goal defense, and that can be broken down further:

The Huskers are still blocking a lot of shots and defending twos quite well, but opponents are shooting a lofty 36 percent on threes. That's your main difference, and it's not implausible that the loss of guards Lance Jeter and Drake Beranek is behind it. If Doc Sadler can't get his team to defend the three more like they did last year, it's going to be a long conference season.

Elsewhere, Indiana, Iowa, Purdue, Michigan State, and Ohio State beat up on the dregs of Division I. Most notable was Indiana's performance–even against a team as bad as Howard, 1.47 points per possession is an amazing offensive performance. That's a new high for the Tom Crean era, and you have to go back to the days of Roderick Wilmont and Earl Calloway to find a better Hoosier efficiency. There's little doubt at this point that this Indiana squad is for real–KenPom now has them ranked seventh in the nation–and it will be fascinating to see them open B1G play at Michigan State next week.

Tonight, Penn State looks to hold off the Cornell team that just gave Illinois a scare (6:30pm CT, BTN). Thursday brings some very interesting games, most notably Northwestern at Creighton and Illinois vs Missouri. Both of these Land of Lincoln teams could change their seasons with an unexpected win.