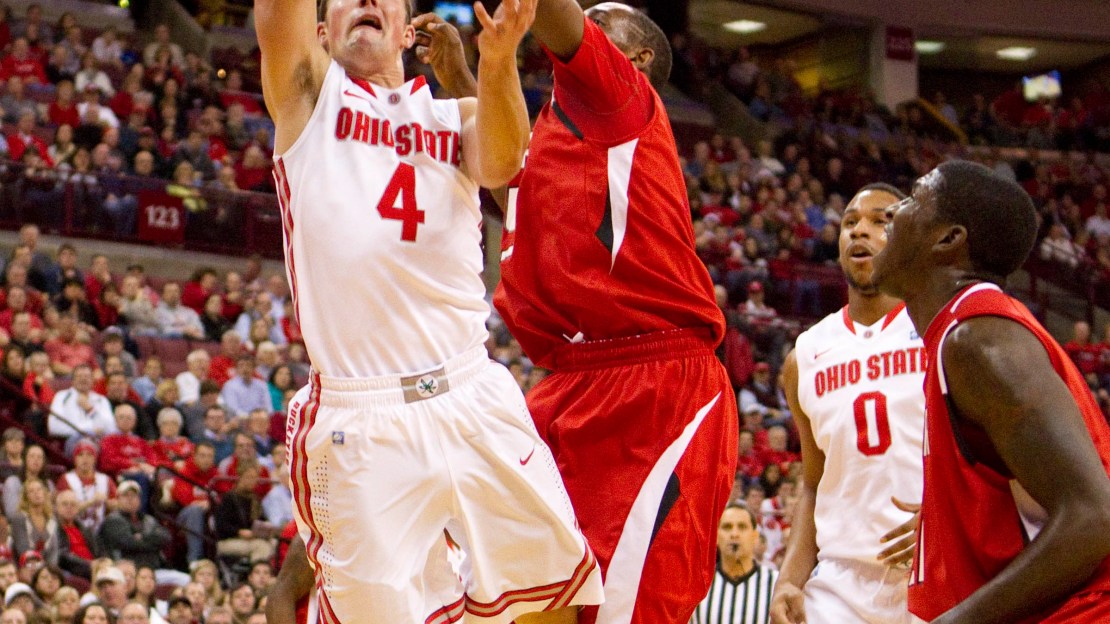 Purdue took care of IPFW (recap) and No. 2 Ohio State topped Lamar (recap) in a BTN doubleheader Tuesday night, while Nebraska nipped Central Michigan (recap). Catch up on all the action on our Big Ten scoreboard and get recaps and video in this post. Gus Johnson was on the call in Columbus, and we posted his best calls from the Ohio State win. Check out our archive of Johnson's latest calls. Did you see Robbie Hummel's thunderous putback to end the first half tonight? If not, watch it now.

FINAL: Ryne Smith led six of Purdue's players in double digits with 12 points as Purdue (10-3) defeated IPFW 81-56 on Tuesday at Mackey Arena in West Lafayette. More Purdue scoring came from Anthony Johnson, who had 11, D.J. Byrd, who added 11, Lewis Jackson, who contributed 10 points, Robbie Hummel, who scored 10 points, and Kelsey Barlow, who scored 10. The Boilermakers hit 53 percent of their field goals (32-of-60). Purdue started the game out strong with a 32-9 run, which allowed it to take a 23-point lead with 6:20 to go in the first half. Byrd finished off the run with a field goal and propelled the Boilermakers to a 50-23 lead at intermission. Joe Edwards tallied 12 points and knocked down 5-of-8 shot attempts for IPFW (7-4) in the loss. The Mastodons shot just 35 percent from the field (21-of-60). IPFW also got a double-digit game from Trey McCorkle, who had 10 points. The Boilermakers never trailed in the game. Purdue's largest lead was 34, which came midway through the second half. With the victory, the Boilermakers snapped the Mastodons' five-game winning streak.

HALFTIME: Purdue's standout offensive performance handed them the first-half advantage against IPFW as it goes into the break up 50-23. The Boilermakers led 43-23 before Purdue went on a 7-0 run to close the half. The Boilermakers led by as many as 27 points in the first half and never trailed. Purdue was leading 10-5 when it used a 9-0 spurt to widen its advantage to 19-5. Eight Purdue players scored in the half. Seven IPFW players scored in the first half. The Mastodons' leading scorer, Frank Gaines, has been shut down thus far. The junior enters halftime with three points, well below his season average of 21.4. Kelsey Barlow led the way for the Boilermakers in the first half, with 10 points. IPFW's Joe Edwards already has seven points.

FINAL: Bo Spencer led five of Nebraska's players in double digits with 15 points as Nebraska (8-3) defeated Central Michigan 72-69 on Tuesday at Bob Devaney Sports Center in Lincoln. The Cornhuskers also got double-digit efforts from Brandon Richardson, who had 15, Caleb Walker, who scored 11, Brandon Ubel, who scored 11 points, and Toney McCray, who scored 11. Central Michigan (5-7) had a rough night from the free throw line, shooting 55 percent (11-of-20). Nebraska, thanks to a field goal by Mike Fox, led by 12 points in the middle of the second half and yet nearly saw that lead disappear completely. The Cornhuskers hit 50 percent of their field goals (23-of-46). Nebraska went 20-of-26 from the charity stripe as a team (77 percent). Trey Zeigler had 20 points and went 6-of-11 from the field for the Chippewas in a losing effort. Austin Keel had a quality shooting game, nailing 4-of-6 shots from the field and scoring 10 points. Central Michigan shot 51 percent from the field (25-of-49). The Chippewas shot 8-of-17 from three-point range during the game, good for 47 percent. Central Michigan also got double-digit contributions from Olivier Mbaigoto, who contributed 15 points and Derek Jackson, who had 13 points.

HALFTIME: Toney McCray has 10 points to lead Nebraska to a 34-26 lead over Central Michigan at the end of the first half. Each team took a turn in the driver's seat as the lead changed hands five times. Trailing 21-20, the Cornhuskers used an 11-0 run to blow past the Chippewas and take a 31-21 lead. Seven Nebraska players have scored. Nebraska fired often and fired with accuracy from distance, hitting 56 percent (5-of-9) of its three-point attempts. In the second half, the Cornhuskers may look to shut down the excellent long-distance game of Central Michigan, which hit 4-of-8 attempts from three-point range. The Chippewas' Derek Jackson's big game so far includes eight points.

FINAL: Thad Matta picked up his 302 career win as a head coach at Ohio State as Buckeyes beat Lamar 70-50 on Tuesday. Jared Sullinger boosted No. 2 Ohio State, with 18 points, 11 rebounds, and 8-of-11 shooting from the field. Ohio State (11-1) shared the ball to the tune of 21 assists on 28 baskets. The Buckeyes also got a solid contribution from Deshaun Thomas, who contributed 16 points. Stan Brown tallied eight points and pulled down nine rebounds for Lamar (8-4) in the loss. The Cardinals struggled from the floor, shooting 36 percent (20-of-56). Devon Lamb, who scored 10 points. Winning the rebounding battle was a key to victory for Ohio State as it outrebounded Lamar 39-33.

HALFTIME: No. 2 Ohio State has a 34-21 lead over Lamar at the half after dominating on the glass, outrebounding the Cardinals 24-14. Seven Ohio State players scored in the half. The Buckeyes won the battle on the offensive boards. After giving up eight offensive rebounds, Lamar will be looking to keep Ohio State off the boards in the second half. The Buckeyes shared the ball, finishing with nine assists on 13 field goals in the first half. Jared Sullinger led the way for Ohio State in the first half, with six points and seven rebounds. The Cardinals' Mike James had a big first half, with seven points.