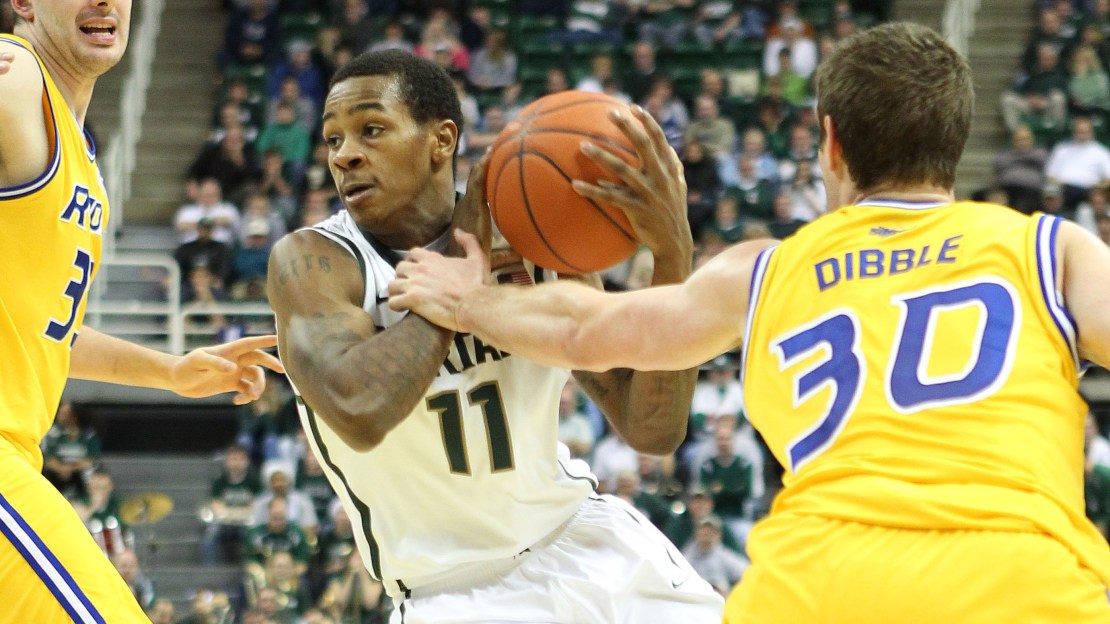 The Big Ten went 4-0 on Monday, with Indiana blasting Howard (recap), Iowa throttling Central Arkansas (recap), Michigan State destroying UMKC (recap) and Illinois nipping Cornell (recap). All together, the Big Ten won the four games by an average of 34.3 points, and that includes Illinois' four-point win. Catch up on the action on our Big Ten scoreboard and get recaps and video highlights in this post. Also, watch Victor Oladipo's latest highlight-reel dunk now.

Gus Johnson was on the call for the Indiana game, and here are his best calls. BTN.com's Brent Yarina rolled out his weekly Best of the Best honors earlier. The Big Ten Conference also announced its weekly basketball honors this week. Here are the men's winners and the women's winners. Brent also posted his latest weekly power rankings.

FINAL: Jordan Hulls scored 16 points and Cody Zeller added 12 points and six boards as they teamed up to lead No. 18 Indiana to a 107-50 victory over Howard on Monday at Assembly Hall in Bloomington. Indiana (11-0) outscored its season average of 82.2 points per game by a large margin. The Hoosiers shot 67 percent from the field (35-of-52). Indiana was on fire from beyond the arc during the game, shooting 55 percent (11-of-20). The Hoosiers went 26-of-37 from the charity stripe as a team (70 percent). Indiana also got double-digit performances from Will Sheehey, who added 12, Verdell Jones III, who scored 12, Christian Watford, who contributed 10 points, and Victor Oladipo, who had 10. Howard (3-9) shot just 31 percent from the field (19-of-62). Simuel Frazier, who scored 13 points. Winning the battle on the boards was crucial for the Hoosiers as they grabbed 34 rebounds to 26 for the Bison..

HALFTIME: Jordan Hulls scored 12 points for No. 18 Indiana in the first half to carry it to a 52-15 lead over Howard. Hulls and Verdell Jones III are leading the way for the Hoosiers. Hulls hit 4-of-5 three-point tries. Jones III scored eight points and shot 3-of-4 from the field. Indiana demonstrated its offensive efficiency by racking up 14 assists on 18 baskets. The Hoosiers were leading 33-12 when they used a 10-0 spurt to widen their advantage to 43-12. Eight Indiana players scored in the half. Indiana has been more effective from beyond the arc than the inside and might want to attempt more three-point shots in the second half after shooting 64 percent (9-of-14) from three-point range in the first half. Seven Howard players scored in the first half. The Hoosiers have been able to keep the Bison's leading scorer, Glen Andrews, under control thus far. The senior enters halftime with three points, well below his season average of 11. Howard's Alphonso Leary had a big first half, with two points.

FINAL: Meyers Leonard scored 19 points and grabbed 16 rebounds to lift No. 24 Illinois to a 64-60 win over Cornell on Monday at Assembly Hall in Champaign. Illinois (11-1) was trailing when Brandon Paul converted a field goal with 1:08 remaining to give it a lead it would not relinquish. Shooting 55 percent (6-of-11) from the line cost Cornell (4-5) in the close game. There were eight lead changes, as neither team could take control of the game. The Fighting Illini made the extra pass all game long, tallying 17 assists on 24 baskets. Illinois gave itself second chances during the game, snatching 13 offensive rebounds. The Fighting Illini also got solid contributions from D.J. Richardson, who had 17 and Paul, who scored 15. Johnathan Gray was 3-of-5 from the floor and chipped in seven points for the Big Red. Cornell shot 10-of-23 from three-point range during the game, good for 43 percent. The Big Red also got a double-digit contribution from Josh Figini, who scored 14 points and Chris Wroblewski, who scored 10 points. Illinois won the rebounding battle en route to victory, pulling down 39 boards to 23 for Cornell.

HALFTIME: No. 24 Illinois and Cornell go into the half tied at 32. Trailing 15-14, the Fighting Illini went cold, going 2:13 without a point while the Big Red went on a 9-0 run to open up a 24-14 lead. Illinois goes into the break with the offensive rebounding advantage. After giving up six offensive rebounds, Cornell will be looking to keep the Fighting Illini off the boards in the second half. Illinois distributed the ball with 12 assists on 13 field goals in the first half. Eight Cornell players scored in the half. Through 20 minutes of action, a major weapon for the Big Red has been shut down as the Fighting Illini have kept Drew Ferry in check. The senior enters halftime with three points, well below his season average of 14.6. Cornell has been able to make the most of its chances from long range, hitting at a 50 percent clip (6-of-12). The Big Red played team basketball in the first half, to the tune of eight assists on 11 field goals. Illinois' Meyers Leonard already has 15 points and nine rebounds. Cornell's Josh Figini had a big first half, with 14 points.

FINAL: Roy Devyn Marble scored 19 points and shot 5-of-8 from the field to lead five Iowa players in double figures as the Hawkeyes topped Central Arkansas 105-64 on Monday at Carver-Hawkeye Arena in Iowa City. Iowa (7-5) also got double-digit performances from Aaron White, who contributed 17 points, Melsahn Basabe, who had 14 points, Matt Gatens, who added 11, and Eric May, who had 10. The Hawkeyes beat their season average of 75.4 points per game by a wide margin. Iowa hit 56 percent of its field goals (42-of-75). The Hawkeyes went into the locker room with the momentum and came out of the second half flying as well. Iowa led 50-42 with 49 seconds left in the first half before it widened the margin to 38 points with a 37-7 run that ended with 7:39 to go. Abodurin Gabriel Olaseni shot 4-of-5 from the field and scored eight points for the Hawkeyes. Dewan Clayborn had 18 points and drilled 6-of-8 three-pointers for Central Arkansas (5-5) in the game. The Bears shot just 32 percent from the field (23-of-73). Central Arkansas was on fire from beyond the arc during the game, shooting 42 percent (8-of-19). The Bears also got a double-digit performance from LaQuentin Miles, who scored 12. Iowa never trailed in the game. The Hawkeyes' largest lead was 43, which came with 1:14 remaining. Iowa had an advantage from the free throw line due to shooting 76 percent (16-of-21) from the charity stripe compared to 71 percent (10-of-14) for Central Arkansas.

HALFTIME: Iowa took full advantage of the stellar combination of Aaron White and Roy Devyn Marble, ending the first half against Central Arkansas up 55-42. White scored 13 points and shot 6-of-9 from the field. Marble scored 12 points. So far, Dewan Clayborn's Bears trail, but he has scored 15 points. The Hawkeyes didn't trail once in the first half and they also led by as many as 19 points. The game was knotted up when Central Arkansas went 2:04 without scoring, allowing Iowa to take a 11-2 lead with 15:50 left in the first half. Iowa got points from eight different players. Eight Central Arkansas players have scored. The Bears have been more effective from beyond the arc than the inside and might want to attempt more three-point shots in the second half after shooting 75 percent (6-of-8) from three-point range in the first half.