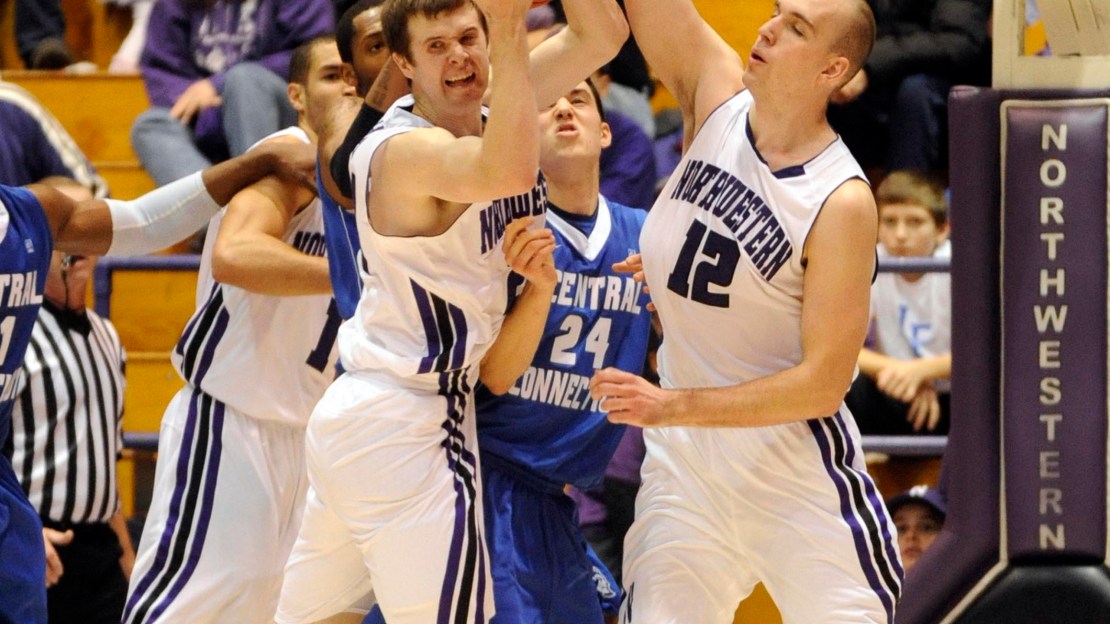 Sunday featured a Big Ten men's hoops doubleheader on BTN, and Big Ten teams cruised to victories in both contests. Penn State snapped a three-game skid with its victory over Mount St. Mary's (box) in the first game and John Shurna drained nine 3-pointers to help Northwestern put away Eastern Illinois (recap) in the nightcap. Catch up on all the action on our Big Ten scoreboard and get final recap stories, video and stats in this post.

FINAL: Tim Frazier led five of Penn State's players in double digits with 15 points as Penn State (7-5) defeated Mount St. Mary's 72-43 on Sunday at the Bryce Jordan Center in University Park. The Nittany Lions also got double-digit contributions from Cammeron Woodyard, who added 14, Billy Oliver, who contributed 13 points, Jermaine Marshall, who scored 10, and Sasa Borovnjak, who had 10 points. Mount St. Mary's (1-9) was held well below the 58.1 points per game it came in averaging on the season. Penn State held the Mountaineers to 37 percent shooting from the field and just nine free throw attempts. The Nittany Lions shot 52 percent from the field (27-of-52). Penn State was hot from long range, hitting 8-of-19 threes for a 42 percent night from beyond the arc. Raven Barber tallied 11 points for Mount St. Mary's in a losing effort. Chad Holley had a quality shooting game, nailing 4-of-7 shots from the field and scoring 10 points. The Mountaineers have now lost eight games in a row.

HALFTIME: Penn State leads 28-25 over Mount St. Mary's at the half thanks to solid production from Cammeron Woodyard. In the first 20 minutes, the Nittany Lions' Woodyard scored seven points. The Mountaineers' Chad Holley's big game so far includes eight points.

FINAL: John Shurna scored 32 points to lift Northwestern to an 87-72 win over Eastern Illinois on Sunday at Welsh-Ryan Arena in Evanston. Shurna and Luka Mirkovic both had solid performances for Northwestern (10-1). Shurna knocked down 11-of-16 shot attempts and shot 9-of-12 from long range. Mirkovic contributed 18 points and shot 7-of-12 from the field. The Wildcats beat their season average of 72 points per game by a wide margin. Northwestern hit 54 percent of its field goals (32-of-59). The Wildcats were on fire from beyond the arc during the game, shooting 52 percent (12-of-23). Northwestern stole the momentum quickly in the second half. Leading 43-40 early in the second half, the Wildcats used a 14-4 spurt to open their cushion to 13 points in the middle of the second half. Dave Sobolewski shot 5-of-6 from the field and scored 12 points for Northwestern. Jeremy Granger tallied 22 points for Eastern Illinois (6-4) in a losing effort. Alfonzo McKinnie had a quality shooting game, nailing 7-of-9 shots from the field and scoring 14 points. The Panthers hit 49 percent of their field goals (28-of-57). Eastern Illinois also got double-digit games from Malcolm Herron, who added 13.

HALFTIME: John Shurna scored 18 points for Northwestern in the first half to carry it to a 41-36 lead over Eastern Illinois. Eastern Illinois got points from eight different players. The Panthers' Jeremy Granger's big game so far includes nine points.