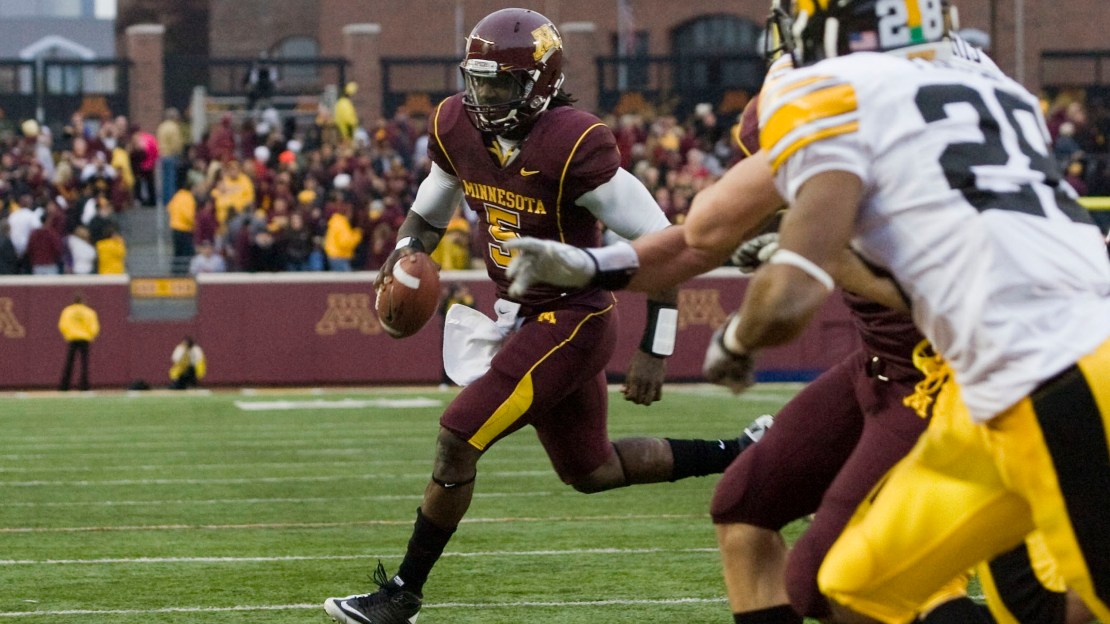 BTN.com senior writer Tom Dienhart spent the season covering Big Ten football, and now it?s time for his team-by-team season recaps. Every day, Dienhart will post a recap for each Big Ten school, in alphabetical order. Up next: Minnesota. Watch our video from the Gophers' second consecutive win over rival Iowa now and read Dienhart?s season recap in this post. And look back at recaps for Illinois, Indiana, Iowa, Michigan and Michigan State here.

Season recap: Jerry Kill?s first season was filled with challenges on an off the field. On the field, the defense struggled, ranking 10th in the Big Ten (403.1 ypg) and was 11th in points allowed per game (31.7). The rushing defense was the biggest issue, as the Gophers were 11th in the Big Ten (186.4 ypg). And Minnesota generated a league-low nine turnovers. Off the field, Kill-a cancer survivor–dealt with seizures, with one striking while he was on the sideline during a 28-21 home loss to New Mexico State.

High point: MarQueis Gray scored the game-winning touchdown from the 2-yard line on fourth down in the waning moments to give Minnesota a 22-21 win over Iowa. It was the Gophers? second victory in succession over the Hawkeyes in a battle for Floyd of Rosedale. Gray hit 11-of-17 passes for 193 yards and ran for 62 yards and the clinching touchdown. Minnesota had lost its first three Big Ten games by an average of 38 points.

Low point: Home losses to New Mexico State and North Dakota State hurt. But a 58-0 whipping at Michigan in a battle for the Little Brown Jug was a doozy. The Gophers started Max Shortell in place of an injured Gray. Minnesota allowed 580 yards and generated no turnovers, while gaining only 177 yards with two turnovers.

Offensive MVP: QB MarQueis Gray. He made a big leap in his development, throwing for 1,495 yards but had as many touchdowns as interceptions (eight) and hit just 50 percent of his passes. Still, Gray?s future looks bright. He led the Golden Gophers with 966 yards rushing with six scores.

Defensive MVP: S Kim Royston. On a porous defense, there were a lot of tackles to be made. And Royston did, ranking second in the Big Ten (10.3 pg).