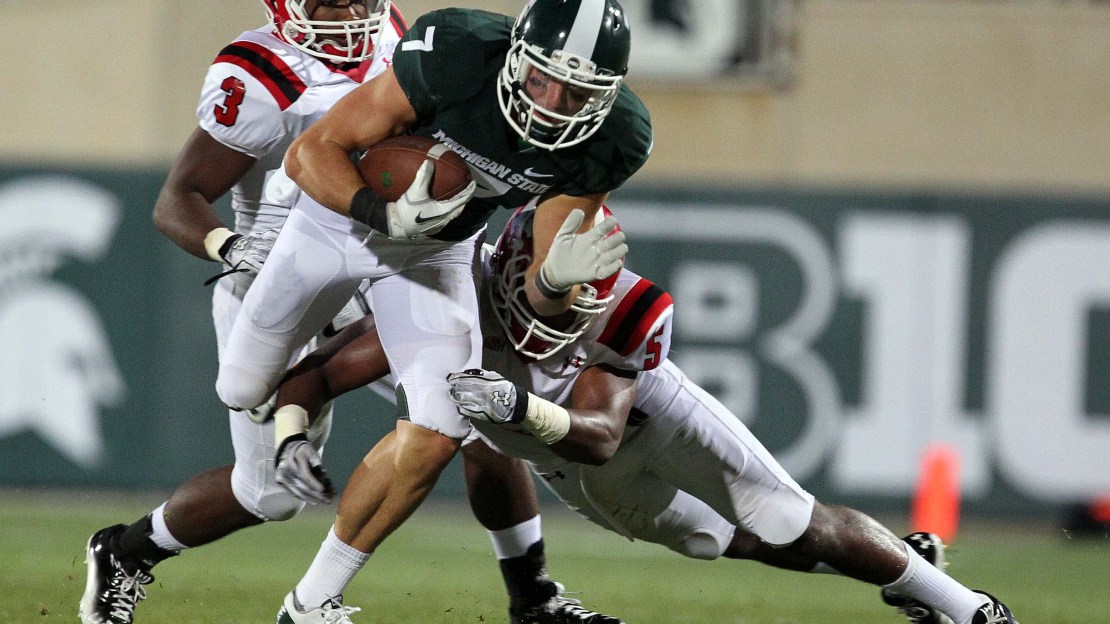 BTN.com senior writer Tom Dienhart spent the season covering Big Ten football, and now it?s time for his team-by-team season recaps. Every day, Dienhart will post a recap for each Big Ten school, in alphabetical order. Up next: Michigan State. Watch our championship game video feature on the Spartans' "Rocket" play now and read Dienhart?s season recap in this post. And look back at recaps for Illinois, Indiana, Iowa, and Michigan here, then get ready for Minnesota coming up.

Season recap: Michigan State raised a second straight Big Ten banner, this time a Legends Division title, and compiled back-to-back 10-win seasons for the first time in school history. All that wasn't enough to send the Spartans to their first Rose Bowl since the 1987 season, though. Michigan State missed out on that opportunity after losing to Wisconsin, which it beat in the regular season, in the inaugural Big Ten title game.

High point: The 37-31 victory over No. 4 Wisconsin will go down in school lore thanks the last-second drama that saw Kirk Cousins hit Keith Nichol with a game-winning 44-yard touchdown toss as time expired with a play called ?Rocket.? The victory pushed Michigan State to 6-1 and stamped them as one of the Big Ten?s best teams. The win was part of a killer October that saw MSU win at Ohio State, vs. Michigan; vs. Wisconsin; before losing at Nebraska.

Low point: After a 2-0 start, the team?s confidence was shaken by a 31-13 drubbing by Notre Dame. But the real downer was the 42-39 loss in the Big Ten title game to Wisconsin that cost the Spartans their first Rose Bowl trip since the 1987 season. A controversial running into the punter call against MSU late in the game iced victory for Wisconsin.

Offensive MVP: QB Kirk Cousins. In addition to being the epitome of a leader, Cousins? passing was the catalyst for the offense all season that ranked No. 2 in the Big Ten in passing (247.5 ypg). He led the Big Ten with 3,016 passing yards along with 24 touchdowns and just seven interceptions, time and again hooking up with stud WR B.J. Cunningham.

Defensive MVP: DT Jerel Worthy. The big fella was a force on the interior all season for a defense that was the backbone of a team that allowed just 17.2 points per game to rank 17th in the nation in scoring defense. The Spartans paced the Big Ten in rushing defense (104.3 ypg). Credit Worthy.