Did You See This? Ohio State's Craft 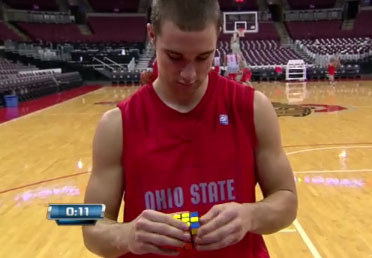 Ohio State point guard Aaron Craft has plenty of brains to go along with his skills on the hardwood. As it's been reported recently, the sophomore sensation received the first "B" of his academic career last year. And it was a B-plus in chemistry, so it's not like he should feel bad. On Tuesday, Craft was caught doing a Rubik's Cube with one hand while conducting a phone interview with CBSSports.com's Jeff Goodman. So, naturally, BTN asked Craft to give the Rubik's Cube a try in front of one of our cameras Wednesday. He succeeded. In just more than a minute, too. Watch the video now.

As for the game on BTN, Ohio State drilled South Carolina-Upstate, 82-58, following a slow start. Read the AP recap.