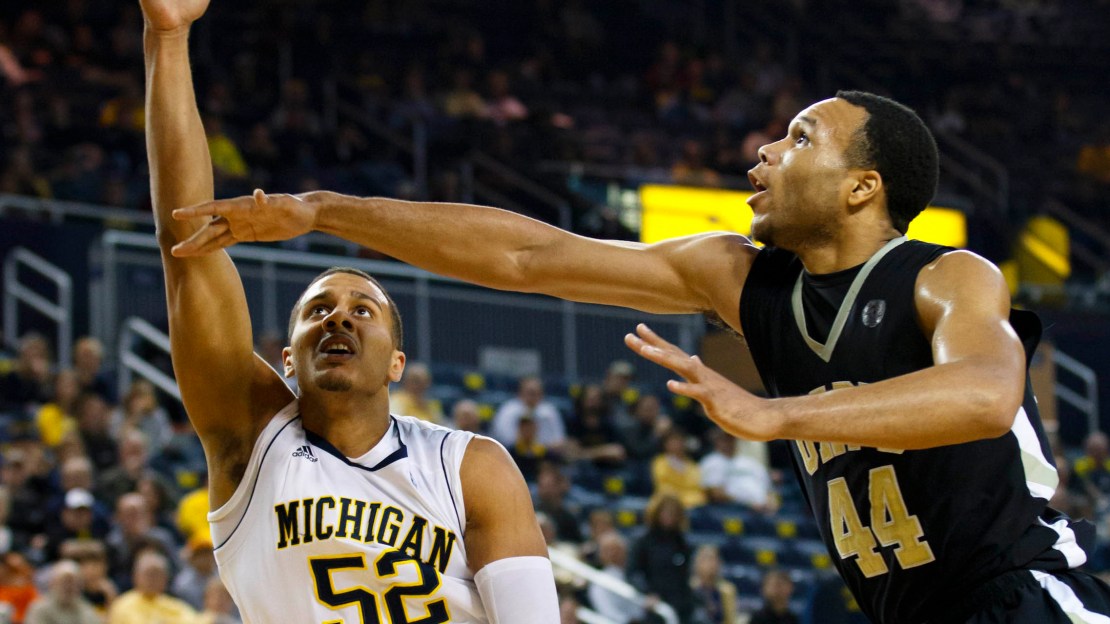 The Big Ten went 3-0 a light day Tuesday night, with Michigan dropping Arkansas-Pine Bluff (recap), Wisconsin holding off Milwaukee (recap) and Minnesota pulling away from Central Michigan (recap). Catch up on all the action on our Big Ten scoreboard and get halftime and recap stories in this post.

FINAL: Evan Smotrycz scored 16 points and grabbed eight rebounds and Trey Burke added 15 points and six boards as they teamed up to lead No. 18 Michigan to a 63-50 victory over Arkansas-Pine Bluff on Tuesday at Crisler Arena in Ann Arbor. Smotrycz had a big game for Michigan (8-2), with 4-of-6 shooting from the field. The Wolverines were on fire from beyond the arc during the game, shooting 52 percent (13-of-25). Michigan made the extra pass all game long, tallying 17 assists on 22 baskets. The Wolverines also got solid contributions from Matt Vogrich, who had 11. Lazabian Jackson tallied 23 points and made 6-of-11 three-pointers for Arkansas-Pine Bluff (1-6) in the loss. The Golden Lions had trouble finding their touch, shooting just 36 percent (19-of-53) from the field. Arkansas-Pine Bluff shot 7-of-18 from three-point range during the game, good for 39 percent. The Golden Lions also got a double-digit effort from Savalace Townsend, who scored 15. Michigan won the rebounding battle en route to victory, pulling down 32 boards to 24 for Arkansas-Pine Bluff.

HALFTIME:  No. 18 Michigan took full advantage of the stellar combination of Evan Smotrycz and Trey Burke, ending the first half against Arkansas-Pine Bluff up 37-17. Smotrycz scored 10 points and grabbed five rebounds. Burke scored 13 points and shot 5-of-9 from the field. The Golden Lions shot 19 percent from the field during the first half. The Wolverines trailed 6-5 when they broke out for a 19-0 run to overtake Arkansas-Pine Bluff and seize a 24-6 lead. In the second half, the Golden Lions may look to shut down the excellent long-distance game of Michigan, which hit 6-of-13 attempts from three-point range. The Wolverines played team basketball in the first half, to the tune of eight assists on 13 field goals. Lazabian Jackson and Savalace Townsend carried Arkansas-Pine Bluff in the first half with 17 of their team's 17 total points. Jackson has scored 14 and Townsend has added three. The Golden Lions have been able to make the most of their chances from long range, hitting at a 50 percent clip (4-of-8).

FINAL: Jared Berggren scored 17 points and grabbed 10 rebounds and Ryan Evans added 16 points and eight boards as they teamed up to lead No. 15 Wisconsin to a 60-54 victory over Milwaukee on Tuesday at US Cellular Arena in Milwaukee. Berggren helped spark Wisconsin (9-2), with 4-of-6 shooting from the field. Milwaukee (8-3) struggled shooting the ball in the game. The Panthers shot 39 percent from the field (21-of-54) and hit free throws at a 41 percent clip (7-of-17). The Badgers also got double-digit performances from Jordan Taylor, who added 14. Evan Richard had 10 points and shot 4-of-6 from the field for Milwaukee in a losing effort. More Milwaukee scoring came from Tony Meier, who scored 15 points and James Haarsma, who scored 11.

HALFTIME: There were no free points for Milwaukee as No. 15 Wisconsin's defense clamped down in the first half and put it up 31-20 going into the break. The Badgers were leading 14-8 when they used an 8-0 spurt to widen their advantage to 22-8. Seven Wisconsin players have scored. Wisconsin moved the ball in the first half, accounting for eight assists on 12 field goals. James Haarsma led the way for the Panthers in the first half, with four points. The Badgers' Ryan Evans already has 10 points.

FINAL: Trey Zeigler scored 19 points, but it wasn't enough to lead Central Michigan past Minnesota, as Central Michigan (4-5) fell 76-56 on Tuesday at Williams Arena in Minneapolis. Julian Welch sparked Minnesota (11-1), as he contributed 15 points and went 5-of-9 from the field for the Golden Gophers in the game. Joe Coleman was 4-of-5 from the floor and chipped in 12 points for Minnesota. The Golden Gophers hit 57 percent of their field goals (27-of-47). Minnesota was on fire from beyond the arc during the game, shooting 47 percent (8-of-17). The Golden Gophers also got solid contributions from Austin Hollins, who scored 12 and Maverick Ahanmisi, who scored 10 points. Austin McBroom shot 5-of-7 from the field and scored 16 points for the Chippewas. Central Michigan struggled from the floor, shooting 36 percent (21-of-59). The Chippewas were hot from long range, hitting 7-of-17 threes for a 41 percent night from beyond the arc. Central Michigan also got double-digit contributions from Derek Jackson, who scored 15. Minnesota had the free throw shooting advantage, converting on 78 percent (14-of-18) attempts to 64 percent (7-of-11) for the Chippewas. The victory extends the Golden Gophers' winning streak to five games.

HALFTIME: Minnesota leads 34-23 over Central Michigan at the half thanks to solid production from Julian Welch. In the first 20 minutes, the Golden Gophers' Welch scored nine points and shot 3-of-4 from the field. Minnesota was leading 19-17 when it used a 13-0 spurt to widen its advantage to 32-17. Minnesota got points from seven different players. The Chippewas have been able to make the most of their chances from long range, hitting at a 44 percent clip (4-of-9). Central Michigan's Austin McBroom already has nine points.