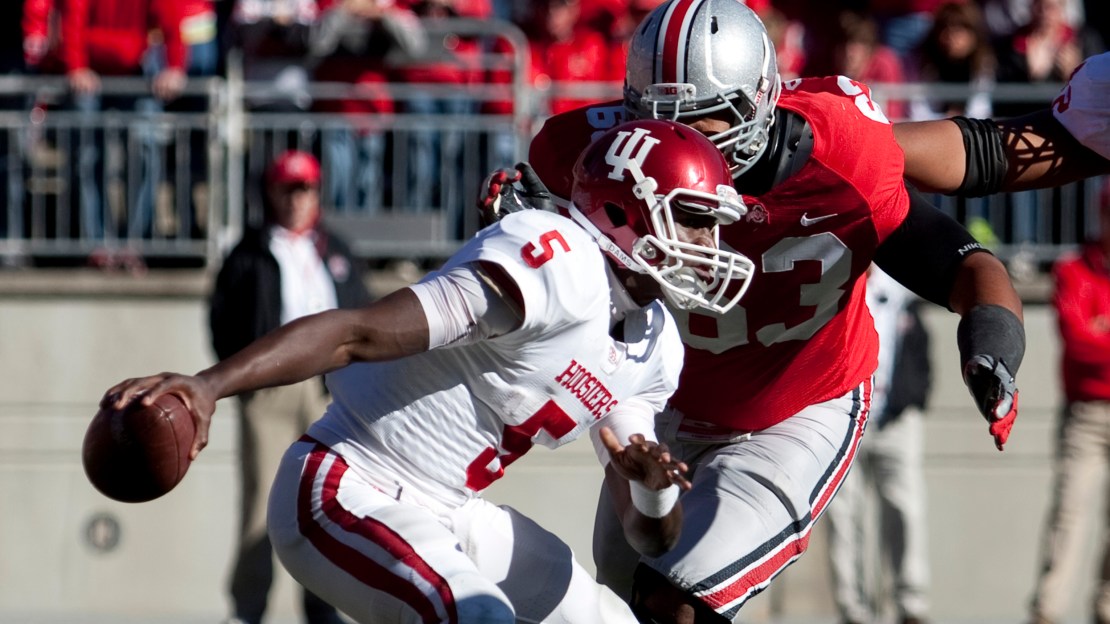 ]BTN.com senior writer Tom Dienhart spent the season covering Big Ten football, and now it?s time for his team-by-team season recaps. Every day, Dienhart will post a recap for each Big Ten school and we're doing it in alphabetical order. Up next: Indiana. Watch our selected BTN video highlight from the Hoosiers' win against South Carolina State now and read Dienhart?s season recap in this post. We're rolling out lour season reviews each day and archiving them all here, too.

Season recap: Kevin Wilson?s debut season was one of Indiana?s roughest in recent memory. Indiana failed to reach the postseason, which has become commonplace in Bloomington for a school with just one bowl (2007) since 1993. There were many issues, but the main one: The defense. The Hoosiers ranked last in the Big Ten in total defense (458.7 ypg), last in rushing defense (243.7 ypg) and last in scoring defense (37.3 ppg). Indiana allowed over 50 points three times, including 59 on two occasions. Indiana was the only school from a BCS conference that didn?t beat a FBS school.

High point: There weren?t many, but let?s go with the lone victory of the season that came vs. FCS South Carolina State. The emergence of quarterback Tre Roberson and running back Stephen Houston also were pleasant surprises for this developing program.

Low point: There were any number of them for a 1-11 team. The Hoosiers finished the season on a nine-game losing streak. The worst loss? A 24-21 defeat at North Texas of the Sun Belt. Losing the Old Oaken Bucket back to Purdue was bad enough. But the worst of many beatings was a 59-7 loss at Wisconsin that saw the Badgers total 524 yards and average 8.1 yards per play and limit Indiana to 287 yards and force three turnovers.

Offensive MVP: QB Tre Roberson. The true freshman didn?t assume command until the sixth game of the season. When he did, Roberson injected excitement into the attack with his big-play ability. He passed for 937 yards and ran for 426, but he had just three touchdown tosses and six interceptions. He?s ultra-quick and showed a knack in the pocket. Roberson?s best game came vs. Northwestern, when he ran for 121 yards and a touchdown and passed for 169 yards and a score.

Defensive MVP: LB Jeff Thomas. There wasn?t much that stood out for a moribund unit, but Thomas was a consistent force. He led the Hoosiers in tackles, with 80, and also paced the squad with 10.5 tackles for loss.