Big Ten Geeks: Is Indiana Back? 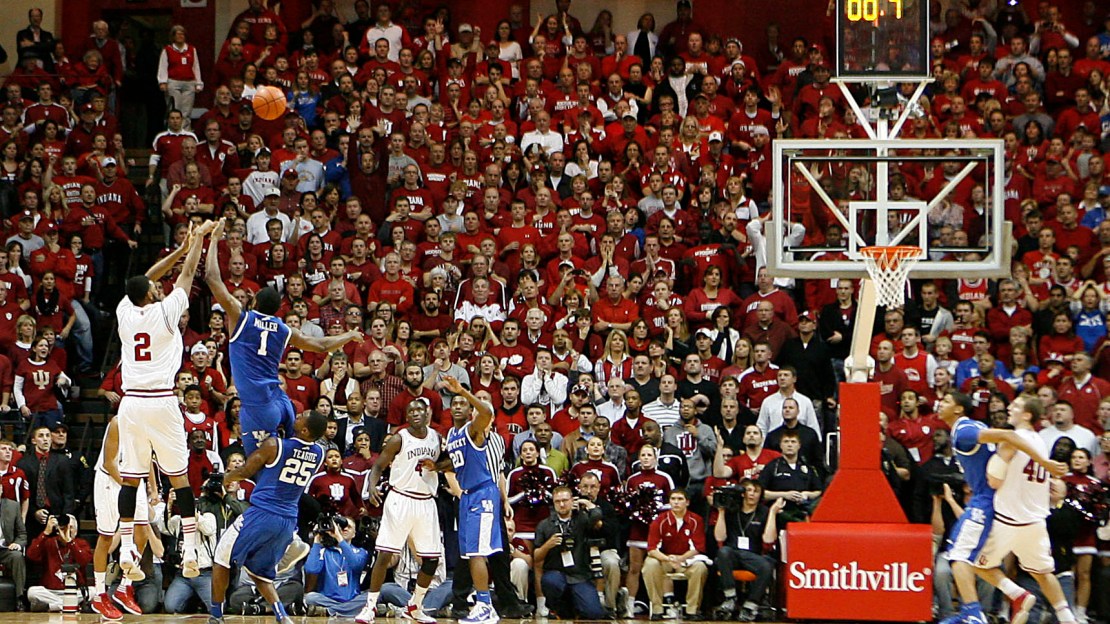 No doubt that after the Hoosiers? dramatic win over top-ranked Kentucky that the talk centers on whether Tom Crean?s rebuilding job of the once-proud program is complete. There are certainly a lot of reasons to think so, even aside from the whole just-beat-the-best-team-in-the-country thing. For one, let?s take a look at the talent on the roster.

The core of this team comprises Christian Watford (a one-time top 50 recruit), Victor Oladipo (one of the best freshmen in all of college basketball last season), and McDonald?s All-American Cody Zeller. Each of these players are certainly worthy of major minutes at any program. And complimentary players like Jordan Hulls, Will Sheehey, and senior Verdell Jones are nothing to sneeze at, either.

We can also go to the computers. After Watford?s three found the bottom of the net, the Hoosiers rocketed up to 13 in the Pomeroy rankings. What?s more, his projection system figures IU to finish with plenty of wins this season, plus any noise they make in the Big Ten and NCAA Tournaments. Tom Crean?s squad has lit the nets on fire so far, ranking 9th in effective field goal percentage. The Hoosiers have also made frequent stops at the free-throw line, where they?re shooting 75 percent. Add it up, and this is the nation?s 11th best offense, folks.

So is IU?s long nightmare finally over? Are Hoosier fans back to talking about which top-3 seed the Selection Committee will bestow? Can we all just forget that Kelvin Sampson ever happened?In this analyst's opinion, not quite. Yes, IU is much better than last season, and yes, the smart money is on them dancing at this point. But I?m holding on to some skepticism that Indiana ?is back,? at least so long as ?back? means ?from whence you came.? The reason is simply because the strengths that have made IU into an elite-looking team just don?t look sustainable. Let?s revisit that shooting. It?s one thing to shoot very well, but no team in college basketball is going to convert 46 percent of its three-pointers, which is what the Hoosiers are doing right now. Every year, the national leader in this statistic tops out at around 43 percent, and a team that shot under 35 percent from deep last season and added a post player is not the squad I?d pick to break through that barrier.

Then there?s the matter of dumb luck. Take, for example, the fact that Indiana opponents are shooting under 63 percent from the foul line. We can also point to events within the games themselves. Even though it?s early, in the two games IU?s been tested in, they?ve certainly benefited from karmic assistance. There was the flagrant foul late in Raleigh, the numerous favorable bounces for IU?s threes against Kentucky, and the fact that the Wildcats missed free throws that would have put the game away.

None of this is meant to diminish what Indiana accomplished on Saturday (you know it?s a good win when it overshadows the fact that previously unbeaten Ohio State was taken down), and the overall job that Tom Crean has done in rebuilding the program. The fact that I think he?s not done is more of a statement of how good IU can be, and how good it once was. This is not a program that should be satisfied with just making the Dance.

Now, onto those Buckeyes. The reason they lost is simply because they didn?t shoot well, something that?s rarely a problem for Thad Matta?s teams. The 42.7 effective field goal percentage was just the 9th game OSU?s failed to meet the 43.0 threshold since the 2008-09 season. Of course, the fact that Jared Sullinger didn?t play certainly was a contributing factor for the poor shooting. His minutes were shared between Evan Ravenel and Amir Williams, who totaled 11 points (on 9 shots), to go along with 5 turnovers and 8 fouls. But the fact that Sullinger is much better than most other players in college basketball is not exactly news. And I?m not too concerned by the loss, either. Kansas is a good team, was playing at home, and Sullinger?s injury will not sideline him for long. But the game did give us a peek into the future. Sullinger is likely to give the NBA a long look after this season, and the Buckeye offense will look much different in a post-Sullinger world. More certain is the fact that Buford will no longer be in an Ohio State uniform. Between those two, it?s the lion?s share of the offense. Deshaun Thomas will be the focal point, but someone else will need to step up to share the load.

Balancing out Ohio State?s loss to a tough team in a road environment was Michigan State taming the Gonzaga Bulldogs in the kennel, where Gonzaga?s been beaten exactly nine times over the past 8+ seasons. Once again, the Spartans were defensive stalwarts, holding Mark Few?s team to under a point per possession. Indeed, only against Duke and Central Connecticut (the latter of which included plenty of action from the guys deep on the Spartan bench) has MSU allowed a team to break that barrier. For some context, last year?s Michigan State squad held opponents under the point per possession mark just 44 percent of the time. So this year?s defensive version of the Spartans represents a real turnaround, especially in light of the fact that Tom Izzo is down one Delvon Roe. If you want reason to be optimistic, last year?s Michigan State team went 14-1 in games where they held opponents to under a point per possession. Oh, and Draymond Green was pretty good on Saturday as well.

Last year?s breakout player in the Big Ten was probably either Darius Morris or Jeff Brooks. There?s a long way to go this season, but it?s a one-horse race right now, and that horse is Ben Brust. The one-time Iowa commit barely played last season. But this year, The Curious Case of Benjamin Brust has been playing like an All-American. On Saturday, he led the Badgers to a 62-51 win over UNLV, scoring 25 points on just 9 shots. Bo Ryan was fortunate that he had Brust?s services, as his point guard turned in an 0 for 10, 3 turnover, and 4 foul performance. Sheesh, who is this joker?

This week will be pretty light as the students turn to finals for the semester. For all practical purposes, this week will bring the end of meaningful out of conference play. Right now, the Big Ten ranks 1st in Pomeroy?s ranking system, and no one is within spitting distance. The only drama I see in the conference battles is whether the Mountain West can overtake the Pac 12. It would actually be pretty funny to see that happen, as Utah would have actually moved down (in a basketball sense) a notch by switching conferences. Of course, the Utes (who may not beat a Division I team all season) are the primary reason for the Pac 12?s poor showing so far. But I?ll save any more analysis of that for any Pac 12 Geeks who want to wallow in the conference?s feeble state.