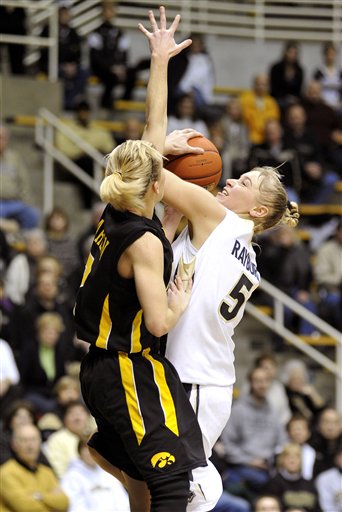 It was a tough day for Big Ten women's hoops teams Sunday. The conference went 3-3, with losses to Central Michigan, Eastern Michigan and Drake, and No. 12 Purdue lost for the second time in as many days. On the bright side, No. 17 Penn State took care of business, thumping Maryland-Eastern Shore, 76-51. Catch up on all the action on our Big Ten scoreboard and see recaps from all the games in this post. Watch our highlights from Minnesota's win now.

The University of Michigan women's basketball team cut its early deficit to single digits but could not complete the comeback effort, falling to cross-town rival Eastern Michigan, 77-64, on Sunday afternoon inside the Convocation Center. For the first time this season, four Wolverines scored in double figures. Rachel Sheffer led Michigan with 16 points on 5-of-9 shooting while posting a team-best six rebounds and a career high five assists. Read the full recap at MGoBlue.com.

(AP) Maggie Lucas scored 20 points, Nikki Greene added 14 and No. 17 Penn State defeated Maryland-Eastern Shore 76-51 on Sunday. Alex Bentley had 11 points and a game-high nine assists as the Lady Lions (8-2) shot 47 percent (27 of 58) from the field. Penn State has averaged 80 points per game over its last six contests, going 5-1 during that stretch. Leading 40-30 at the break, Penn State held the Hawks to 12 points in the first 11 minutes of the second half.

Sasha Chaplin's clutch free throws and Jasmine McGhee's career-high 27 points lifted Indiana over IUPUI on Sunday afternoon in Indianapolis, 65-64. McGhee also had a career-best 15 rebounds for her second double-double of the season. The two teams battled back and forth in the early going. Jasmine McGhee made her presence known right away as she strung together a stretch where she score 10-consecutive points for the Hoosiers capped by a layup to give IU a 14-13 advantage with 11:37 on the clock. Read the full recap at IUHoosiers.com.

Despite coming from behind to lead by one point with seven minutes to play, the Wisconsin women?s basketball team couldn?t overcome a strong Drake squad, losing the non-conference contest, 65-54, Sunday afternoon at the Kohl Center. Wisconsin enters its 12-day break with a 4-7 overall record, while the Bulldogs improve to 4-4. The Badgers host Green Bay on Dec. 23 in their final non-conference game of the season. Read the full recap at UWBadgers.com.