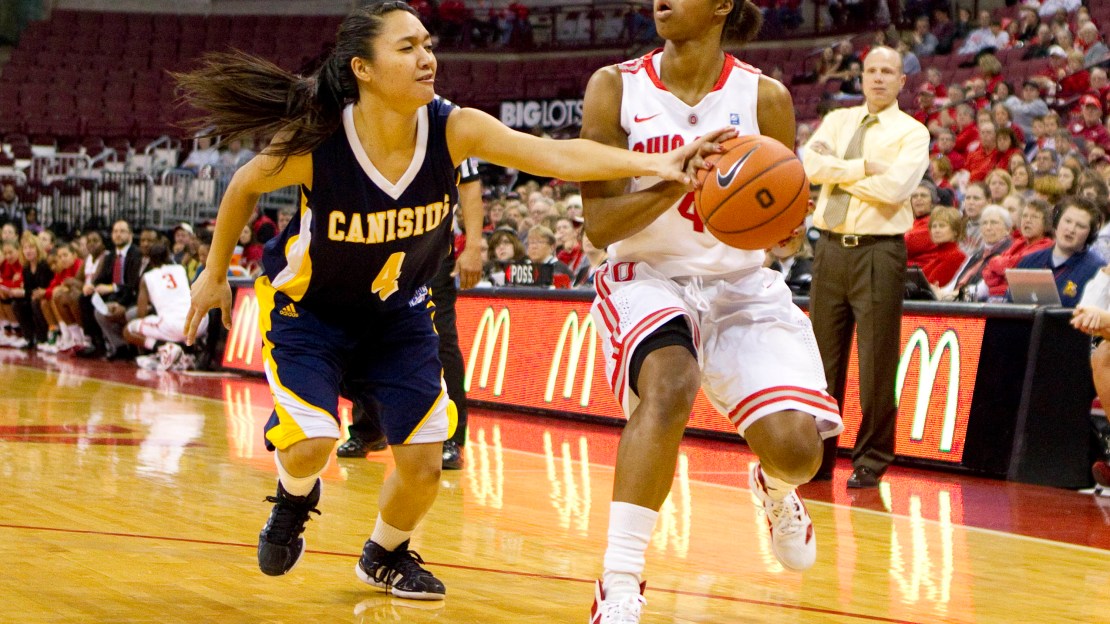 There were six Big Ten women's hoops games Saturday, including a top 15 matchup between instate rivals No. 12 Purdue and No. 3 Notre Dame. The Irish cruised to a 66-38 victory at Mackey Arena. Another ranked Big Ten team, No. 13 Ohio State, had better luck Saturday, posting an 84-41 rout of Canisius. Catch up on all the action on our Big Ten scoreboard and get recaps and stats in this post. Ohio State 84, Canisius 41 BOX

(AP) Tayler Hill scored 21 points and Samantha Prahalis had 20 to help No. 13 Ohio State beat Canisius 84-41 Saturday. The Buckeyes worked the ball inside and scored 34 points in the paint compared to eight for Canisius (3-5). They also totaled 16 assists. Ohio State's 8-0 record ties the 2009-10 team for the best start in coach Jim Foster's 10 seasons at the school and the Buckeyes have won 16 of their past 17 games with the only loss to Tennessee in the 2011 NCAA Dayton Regional in March.

(AP) Natalie Novosel scored 17 points and Devereaux Peters added 16 points and 11 rebounds to help No. 3 Notre Dame defeat No. 12 Purdue 66-38 on Saturday. Skylar Diggins added nine points, seven assists and six rebounds for the Fighting Irish Notre Dame (9-1) has won six straight since losing at No. 1 Baylor 94-81 on Nov. 20. Courtney Moses scored 14 points and Antionette Howard added 13 for Purdue (7-2), which was coming off a 60-51 win over No. 4 Texas A&M, the defending national champion, on Sunday.

Northwestern fought back from a 12-point first-half deficit and staved off a late Loyola attack to earn a 72-67 win at Gentile Arena Saturday afternoon. Kendall Hackney and Dannielle Diamant led the Wildcats offensively, tying a season-high and a career-high, respectively, with 20 points each. Freshman Morgan Jones added 16 points, five rebounds and five assists. With the victory, NU improves to 7-1 on the year. Read the full recap at NUSports.com.

(AP) Cokie Reed returned to the court after an early injury scare and led No. 25 Texas past Michigan State 61-53 Saturday. Reed, who missed all of last season after undergoing surgery on her right foot, left in the first half following a hard fall. She was back before halftime and finished with 14 points and eight rebounds for the Longhorns (6-2). Porsche Poole scored 13 points for Michigan State (7-4). Michigan State took an early 11-3 advantage, powered by a trio of 3-pointers. A layup by Ashleigh Fontenette gave Texas its first lead of the game at 16-15 and keyed an 18-7 run by the Longhorns. Texas never trailed again.

Jordan Hooper and Lindsey Moore became the first Husker teammates in history to score 30 or more points in the same game to lead the Nebraska women's basketball team to a 97-88 double-overtime victory at Northern Arizona on Saturday afternoon. Nebraska improved to 9-1 with the victory, which marked the Huskers' first true road overtime victory since a 73-68 win at Missouri on Jan. 19, 1996. It was just the second double-overtime road victory in school history, joining a 98-88 win at Notre Dame on Feb. 25, 1982. Read the full recap at Huskers.com.

Senior Kiara Buford put together one of the best performances of her career Saturday afternoon to pace the University of Minnesota (6-5) women's basketball team to a 79-53 win over Harvard (4-5) on the second day of the Best Buy Classic at Williams Arena. The Gophers will wrap up the tournament Sunday with a 2:00 p.m. contest vs. Alcorn State. Buford scored a season-best 25 points, only two points off her career-high, on 11-of-14 shooting from the floor, while adding career-highs with three blocks and 11 made field goals. The guard scored in double-figures in her 11th-straight game for the Golden Gophers, a mark that currently leads the Big Ten. Buford also matched her career-best with six assists and had only one turnover in 34 minutes of play vs. the Crimson. Read the full recap at GopherSports.com.