Dienhart: My Best of the College Football Bowls 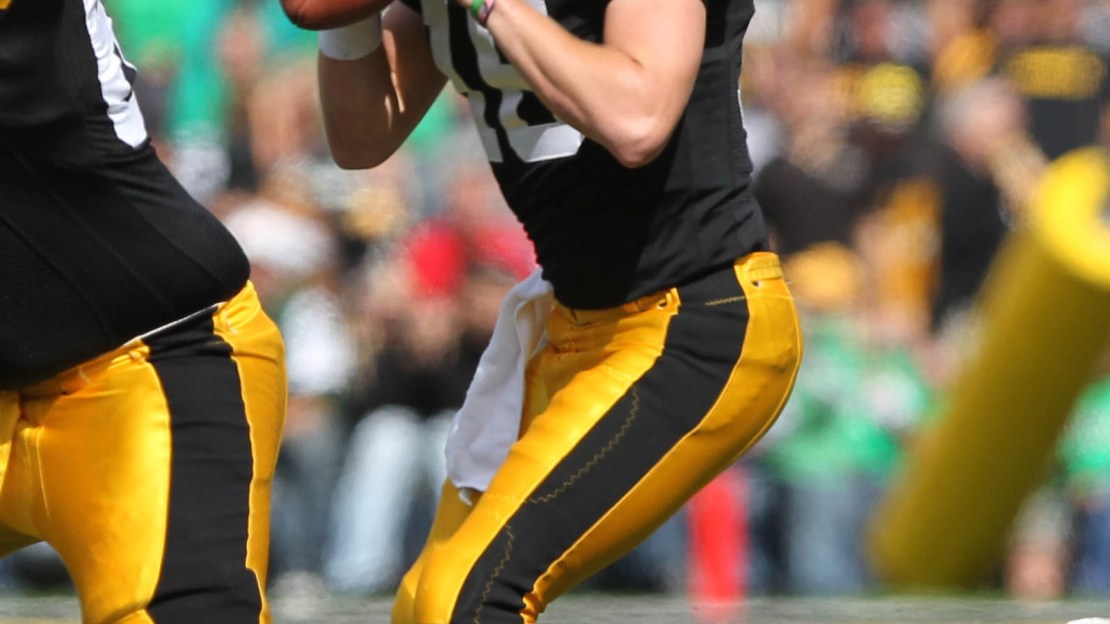 Earlier this week we ranked the 2011-2012 college football bowl games as a sort of TV guide for the discerning Big Ten viewer who might not be looking to watch all 35 games, Big Ten and otherwise. And before the bowls take off I'll be previewing each of the ten Big Ten bowl games in detail, too (full college bowl schedule here).

BTN.com web editor Brent Yarina looked back and ranked the Big Ten plays of the year and posted videos of each of his picks. But now, as 35 college football bowls are slated to kick off Dec. 17 with the New Mexico Bowl, it?s time for me  to examine and rank a variety of categories we'll call"The Best of the Bowls." What do you think of my selections? Leave your suggestions in the comments box at the end of my post or contact me on Twitter.

Setting: Rose Bowl, Pasadena, Calif. With the San Gabriel Mountains as a backdrop, this iconic venue shimmers with unmatched history and beauty. And it?s always 72 degrees and sunny. Always. The bowl gods make sure it?s so.

Team not bowling: USC. If not for NCAA probation, the Trojans may be in a BCS bowl. USC finished 10-2, losing at Arizona State (43-22) and in triple overtime to Stanford. But the Trojans were the only Pac-12 team to knock off Oregon, 38-35.

Player not bowling: USC quarterback Matt Barkley. The guy probably has a legit case to be a Heisman finalist. He?s No. 8 in the nation in passing with 3,528 yards passing, 39 touchdowns and just seven picks. In case you were wondering, all of those numbers are better than Stanford?s Andrew Luck.

Coaching matchup: Alabama?s Nick Saban vs. LSU?s Les Miles, BCS title game. Saban has two national titles (2003 and 2009). Miles has one (2007). These guys are at the tops of their profession-and it?s not even close.

Sponsor: Beef 'O' Brady?s Bowl. All I need to hear is the word "beef." It has to be good, right? I?ll take "The Dubliner," please, and a Coke with no ice.

Sponsor we wish would return: Poulan Weed-Eater was the sponsor of the Independence Bowl from 1990-96. A no game sponsor has come close to matching the infamy of what affectionately became known as the "Weedwhacker Bowl." Even today, there can?t possibly be a more well-known weed eater on the planet, can there? Brilliant marketing. I hope someone got a raise for this.

BCS matchup: C?mon. Do you have to ask? If you do, then you will be forced to watch the "Ace of Cakes" marathon on Food Network. I pity you.

Non-BCS matchup: You have to like the Georgia-Michigan State Outback Bowl matchup. Each school played in its respective league title game. And each school has a strong defense-and probably deserved a better bowl. Want more? The quarterback battle between the Bulldogs? Aaron Murray and the Spartans? Kirk Cousins will be among the best in the postseason.

Matchup we would have like to see: LSU vs. Oklahoma State, BCS title game. Yes, the BCS, AP and Coaches polls all had LSU No. 1 and Alabama No. 2. But Oklahoma State beat more ranked teams and toppled more teams with a winning record than Alabama. And if Oklahoma State were named, say, Florida, Ohio State or USC, you wonder if pollsters would have treated the Cowboys differently. The clash between the LSU defense and Oklahoma State offense would have been epic, as would the Les Miles and Mike Gundy press conferences. We could finally have answered the question: Who is more of a man?

Quarterback battle: Check out the Fiesta Bowl, which pits Oklahoma State?s Brandon Weeden and Stanford?s Andrew Luck. I also like Iowa?s James Vandenberg vs. Oklahoma?s Landry Jones in the Insight Bowl, along with Georgia?s Aaron Murray and Michigan State?s Cousins in the Outback and Oregon?s Darron Thomas and Wisconsin?s Russell Wilson in the Rose Bowl.

Places to socialize: Bourbon Street, New Orleans, at the Sugar Bowl. Other faves: Mill Avenue in Tempe, Ariz., the River Walk in San Antonio. And how about New York City for the Pinstripe Bowl? Pack your Visa. Better yet: pack two Visas.

Bowl dome: University of Phoenix Stadium in Glendale, Ariz., is spectacular, with all the creature comforts of home. Too bad Glendale is in the middle of, well, nowhere.

6-6 team: Texas A&M. The Aggies began 2011 as a dark horse to win the Big 12. Seems like a century ago. Just ask Mike Sherman. But defensive struggles torpedoed those dreams, as Texas A&M lost four of its last five games. Some of the second-half defensive collapses were colossal. Still, this is a good team and strong offense that?s capable of beating most teams. Did you hear that, Northwestern?

One-loss team: Alabama. The one defeat was a 9-6 overtime defensive taffy pull to No. 1 LSU.

Two-loss team: Arkansas. The Hogs have a spectacular offense led by quarterback Tyler Wilson and a strong collection of running backs. The two losses? They were to LSU and Alabama. Honestly, Arkansas probably belongs in a BCS bowl, but rules limit leagues to two. That?s a shame.

Day to watch bowls: Monday, Jan. 2. It?s this year?s de facto January 1, which in 2012 is a Sunday packed with NFL games. So, the bowls pushed their high holy day back one day. And it?s a day filled with six-count ?em SIX-games. TicketCity, Outback, Capital One, Gator, Rose, Fiesta. Loosen your belt and enjoy!

Day to catch your breath: Beginning December 20 and through January 9, there will be just four days with no bowls: Dec. 23 and Dec. 25, and Jan. 1 and Jan. 5. Perfect time to schedule that out-patient liposuction.

Bowl to miss: Really, if you have to watch the Potato Bowl between Utah State and Ohio on Dec. 17, you may need to enter a 12-step program. Just sayin?.

Bowl city: New Orleans. The city has a rich history with the Sugar Bowl. But best of all is the proximity of fans, restaurants, bars, hotels and the stadium, all within blocks of each other. That makes for lots of co-mingling and raucousness between fandoms. The Alamo Bowl in San Antonio is similar in that regard.

Traditions: The Rose Bowl parade. See, even Grandma has a reason to be excited about the bowl season. The fancy floats always make her dentures drop into her egg nog. At least they do for my grandma.

Bet for smash-mouth football: Nebraska vs. South Carolina. Nothing fancy here, people. Just lots of punches in the nose between two physical offenses. Why? Because they have no other choice. The Cornhuskers rank No. 103 in the nation in passing; the Gamecocks are No. 97.

Bet for a defensive struggle: It has to be LSU-Bama in the title game. Neither team scored a touchdown in the first meeting, a 9-6 overtime fistfight. Bama is No. 1 in the nation in scoring defense (8.8 ppg); LSU is No. 2 (10.5 ppg). Good luck extracting points.

Bet for a shootout: Iowa vs. Oklahoma in the Insight Bowl. Moving the ball and scoring haven?t been issues for either team. But defense has. What?s it mean? This could be a fun game with lots of back-and-forth action and a pinball machine score. Bob Stoops and Kirk Ferentz have to hate that.

Bet for a blowout: Don?t be shocked if 11-1 Boise State blows the doors off 6-6 Arizona State in the MAACO Las Vegas Bowl. The Broncos deserved better and will take it out on the poor Sun Devils. Hey, if you have to get blown out, it?s better to have it happen in Vegas than Shreveport.

Bet for a nail-biter: Ohio State vs. Florida. These offensively challenged teams (and I?m being nice) figure to have a close battle that could come down to the last possession. Gripping-and boring.

Bet for a four-hour game: If you plan on watching the West Virginia-Clemson Orange Bowl, you may wanna pack a toothbrush and clean pair of fruit-of-the-looms. The Mountaineers LOVE to sling the ball (496 attempts). And so do the Tigers (478). And not all of those passes will be caught, which means the clock often will be stopped with incompletions.

Reason for contraction: Look up "bowl excess" in the dictionary, and you?ll find this: 8-4 Florida International vs. 6-6 Marshall in the Beef ?O? Brady?s Bowl. Does America really need this?

Place without a bowl: How about a bowl at Indianapolis? palatial Lucas Oil Stadium between the Big Ten and C-USA? I bet Peyton Manning can get it done.