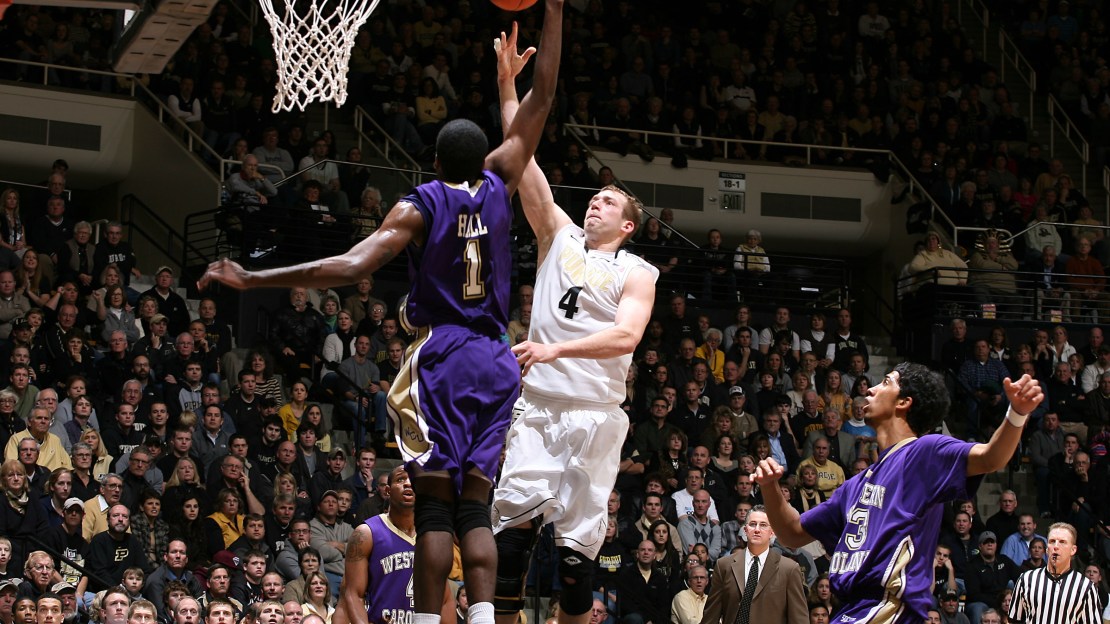 It was a struggle for the Big Ten on Wednesday night. The conference eked out several wins against inferior opponents, including Illinois over St. Bonaventure (box), Nebraska over Florida Gulf Coast (recap) and Purdue over Western Carolina (recap), while Penn State lost to Lafayette (recap). There were a couple drama-free games, though, as Wisconsin drilled Green Bay (recap) and Michigan State blew away CCSU (recap). Catch up on all the action on our Big Ten scoreboard.

In women's hoops, Illinois and Minnesota carded victories, while Iowa and Indiana lost. Read all about the games with our women's recap.

FINAL: Behind a solid offensive effort, Michigan State defeated Central Connecticut State 89-69 on Wednesday at the Jack Breslin Student Events Center in East Lansing. Michigan State (7-2) outscored its season average of 73 points per game by a large margin. The Spartans hit 51 percent of their field goals (33-of-65). Michigan State shot 8-of-21 from three-point range during the game, good for 38 percent. Travis Trice helped spark the Spartans, with 20 points and 6-of-8 shooting from the field. Michigan State went into the locker room with the momentum and came out of the second half flying as well. The Spartans trailed 34-32 late in the first, but went on a 20-6 run over the next 7:11 to take a 12-point lead. More Michigan State scoring came from Draymond Green, who contributed 14 points, Derrick Nix, who scored 13 points, and Branden Dawson, who scored 11. Ken Horton tallied 17 points for Central Connecticut State (5-3) in the loss. The Blue Devils shot just 35 percent from the field (23-of-66). Central Connecticut State also got double-digit games from Robby Ptacek, who had 16 points and Kyle Vinales, who scored 11 points. With the win the Spartans extend their winning streak to seven games and snap the Blue Devils' five-game winning streak.

HALFTIME: It is still anyone's game as Michigan State and Central Connecticut State have passed the lead to each other five times already in the first half. At the moment the Spartans are on top 36-34. Michigan State trailed 28-22 when it broke out for an 8-0 run to overtake the Blue Devils and seize a 30-28 lead. Eight Michigan State players scored in the half. Seven Central Connecticut State players scored in the first half. The Spartans' Draymond Green already has nine points. Ken Horton's big game so far includes 11 points.

FINAL: Penn State could not find its touch from the field or the line in a 61-57 defeat to Lafayette on Wednesday at the Bryce Jordan Center in University Park. Penn State (6-4) shot 62 percent (16-of-26) from the charity stripe and 33 percent (19-of-57) from the field. Even in defeat, Jermaine Marshall came through for the Nittany Lions with 20 points. Lafayette (4-5) nearly blew the 10-point lead that Joey Ptasinski gave them on a field goal midway through the second half. Jim Mower sparked the Leopards as he had 14 points in the win. Lafayette had trouble finding its touch, shooting just 38 percent (18-of-47) from the field. The Leopards also got double-digit performances from Seth Hinrichs, who contributed 14 points and Nick Petkovich, who scored 13 points. Ross Travis was 5-of-5 from the floor and chipped in 12 points for Penn State. The Nittany Lions also got double-digit contributions from Cammeron Woodyard, who added 10.

HALFTIME: Lafayette leads 37-32 over Penn State at the half thanks to solid production from Nick Petkovich. In the first 20 minutes, the Leopards' Petkovich scored nine points and hit 3-of-5 three-point tries. The Nittany Lions led 16-14 when a drought lasting 1:42 coincided with a 10-0 run by Lafayette that allowed the Leopards to take a 24-16 lead. Penn State got points from seven different players. The Leopards put the clamps on Penn State's three-point game, and the Nittany Lions may try to work the ball inside more in the second as Penn State made 59 percent of two-point attempts (10-of-17) and eight percent (1-of-13) from long range. The Nittany Lions' leading scorer, Tim Frazier, has been contained by Lafayette thus far. Sitting with two points, the junior is far below his 19.2 per game average this year. Seven Lafayette players have scored. Jermaine Marshall led the way for Penn State in the first half, with 11 points.

FINAL: Robbie Hummel scored 19 points to lead Purdue to a 65-60 win over Western Carolina on Wednesday at Mackey Arena in West Lafayette. Western Carolina (5-5) struggled shooting the ball in the game. The Catamounts shot 37 percent from the field (21-of-57) and hit free throws at a 59 percent clip (10-of-17). Purdue (8-2), thanks to a field goal by Hummel, led by nine points with 3:09 remaining and yet nearly saw that lead disappear completely. The Boilermakers had trouble finding their touch, shooting just 38 percent (20-of-52) from the field. Purdue shot 19-of-36 from the free throw line. The Boilermakers also got double-digit contributions from Lewis Jackson, who scored 15. Harouna Mutombo had 18 points for Western Carolina in the loss. Keaton Cole had a quality shooting game, nailing 6-of-10 shots from the field and scored 15 points. The Catamounts were on fire from beyond the arc during the game, shooting 38 percent (8-of-21). Western Carolina also got double-digit efforts from Trey Sumler, who had 15 points. With the game tied 17-17 the Catamounts unleashed a 12-4 flurry to take an eight-point advantage with nine seconds left in the first half. Sumler finished the run off with a field goal, which helped Western Carolina lead 29-21 at halftime.

HALFTIME: Western Carolina and Purdue were tied at 17 before the Catamounts went on a 12-4 run to break things open and take a 29-21 lead into halftime. In the second half, the Boilermakers may look to shut down the excellent long-distance game of Western Carolina, which hit 4-of-9 attempts from three-point range. Purdue's Robbie Hummel already has nine points. The Catamounts' Keaton Cole had a big first half, with eight points.

FINAL: Nebraska trailed in the waning moments of Wednesday's game, but took the lead for good on a field goal with with eight seconds remaining by Dylan Talley and hung on for a 51-50 triumph over Florida Gulf Coast at Bob Devaney Sports Center in Lincoln. After going into the break with momentum, Nebraska (5-3) kept its foot on the gas to start the second half. Down 27-20 in the first, the Cornhuskers broke out for a 17-4 run to take a six-point lead in the middle of the second half. Shooting 50 percent (5-of-10) from the line cost Florida Gulf Coast (3-6) in the close game. Neither team could seize control of the game, as there were eight lead changes. Talley sparked Nebraska as he scored 14 points and drilled 4-of-7 three-pointers in the win. The Cornhuskers also got solid contributions from Brandon Ubel, who scored 10. Sherwood Brown had 14 points and made 6-of-10 shots from the floor for the Eagles in the game. Florida Gulf Coast shot 9-of-20 from three-point range during the game, good for 45 percent. The Eagles also got double-digit efforts from Filip Cvjeticanin, who scored 12 points. Trailing 17-10 with 11:04 to go in the first half, Florida Gulf Coast went on a 17-3 run to seize a seven-point advantage in the first. Dante Holmes capped the run off with a field goal that helped the Eagles lead 27-26 at the half.

HALFTIME: Filip Cvjeticanin has nine points to lead Florida Gulf Coast to a 27-26 lead over Nebraska at the end of the first half. The Cornhuskers should feel pretty good, considering in the first they trailed the Eagles by as many as seven points. Florida Gulf Coast has been able to make the most of its good looks from long range, hitting at a 45 percent clip (5-of-11). Nebraska's Dylan Talley had a big first half, with six points.

FINAL: No. 16 Wisconsin used stingy defense to defeat Green Bay 70-42 on Wednesday at the Kohl Center in Madison. Green Bay (4-5) was held well below the 62.4 points per game it came in averaging on the season. Wisconsin (7-2) held the Phoenix to 32 percent shooting from the field, hauled in 22 defensive boards, while only allowing 11 offensive rebounds, and just five free throw attempts. The Badgers got a spark from Jordan Taylor, who poured in 15 points and nine assists. Jared Berggren shot 6-of-8 from the field and scored 13 points for Wisconsin. The Badgers also got double-digit games from Ryan Evans, who scored 12. Brennan Cougill tallied six points, corralled seven rebounds, and went 3-of-5 from the field for Green Bay in the loss. Daniel Turner had a quality shooting game, nailing 3-of-5 shots from the field and scored six points. More the Phoenix scoring came from Alec Brown scored 10 points. Wisconsin never trailed in the game. The Badgers' largest lead was 28, which came with 1:00 to go. Both teams had 32 rebounds in the game.

FINAL: No. 22 Illinois captured the lead with 2:21 to go on a free throw by Meyers Leonard and hung on for a 48-43 win over St. Bonaventure on Wednesday at Assembly Hall in Champaign. St. Bonaventure (3-4) was held well below the 64.8 points per game it came in averaging on the season. Illinois (9-0) held the Bonnies to 37 percent shooting from the field, hauled in 16 defensive boards, while only allowing eight offensive rebounds, and just eight free throw attempts. Brandon Paul picked up the offensive burden for the Fighting Illini, finishing with 17 points and five assists. The lead changed hands eight times in a back-and-forth affair. Illinois struggled from the floor, shooting 32 percent (15-of-47). The Fighting Illini also got double-digit games from D.J. Richardson, who had 11. Andrew Nicholson had 17 points and pulled down eight rebounds for St. Bonaventure in the game. Demitrius Conger had a quality shooting game, nailing 3-of-5 shots from the field and scored six points. The Bonnies pounded the boards hard in defeat as they grabbed 33 to 24 for Illinois..

HALFTIME: St. Bonaventure has a 26-24 lead over No. 22 Illinois at the half after dominating on the glass, outrebounding the Fighting Illini 17-9. Each team took a turn in the driver's seat as the lead changed hands seven times. The Bonnies have been able to keep Illinois' leading scorer, Meyers Leonard, under control thus far. The sophomore enters halftime with two points, well below his season average of 13.4. Racking up five assists on eight baskets, the Fighting Illini demonstrated their offensive efficiency. Eight St. Bonaventure players have scored. St. Bonaventure crashed the offensive glass. The Bonnies grabbed six offensive rebounds, so Illinois will need work harder at keeping them off the glass in the second half. Sam Maniscalco's big game so far includes five points. Matthew Wright led the way for St. Bonaventure in the first half, with three points.