Dienhart: Purdue has decision to make on Hope 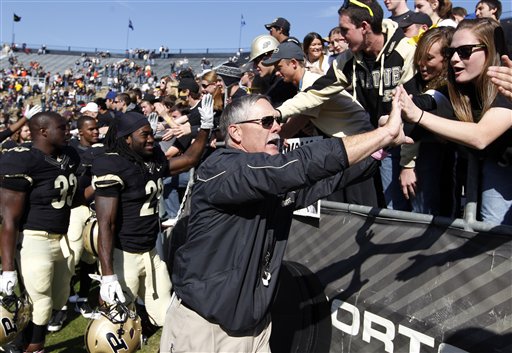 Purdue likely will have to make some type of decision on Danny Hope?s future. And a decision could be made this month.

Hope, 52, has just three years left on his contract, which runs through 2014. Coaches typically work with five years on their contracts for recruiting purposes. Hope had his contract extended one year in April 2010 following a 5-7 mark in 2009. In December 2010, Purdue athletic director Morgan Burke balked at extending Hope?s contract after a 4-8 season. But Burke recently gave Hope a positive review.

As a point of comparison, Michigan State gave a new deal to Mark Dantonio in October that maintained a five-year rollover clause for the Spartan boss. At the time of the deal, Dantonio said in a statement: "This new contract expresses the loyalty that I have to our current student-athletes and their families and sends a clear message to current and future recruits that I will be their head coach at Michigan State.?

Again, maintaining a four- or five-year cushion in a contract isn?t necessary, but it?s a desirable situation for coaches who want to show recruits they have long-term viability. Hope has even said so.

Washington State just inked Mike Leach to a five-year contract with a three-year rollover triggered each year by the A.D. And Western Kentucky just agreed to a new four-year deal with Willie Taggart that includes an automatic one-year rollover on December 31 of each year through 2019.

In his third year on the job, Hope enjoyed a breakthrough of sorts in leading the Boilermakers to a 6-6 overall record (4-4 in the Big Ten) and the program?s first bowl since the 2007 season. Purdue will play Western Michigan in the Little Caesar?s Bowl later this month.

Hope, who was Purdue?s head coach in waiting under Joe Tiller in 2008, has a 15-21 overall record (10-14 Big Ten) during a tenure that has been marred by myriad key injuries on the offensive side of the ball.

Hope?s tenure also has seen attendance dip. According to the NCAA, attendance has declined at Ross-Ade Stadium in each of Hope?s three years in West Lafayette. Purdue averaged 45,225 this season. In 2010, the school averaged 48,063. In 2009, Purdue averaged 50,457.

On the field, Hope has some impressive victories. He?s 2-1 vs. Ohio State and in 2009 became the first Purdue coach to win at Michigan since the 1960s. But there also have been some dubious losses, including home defeats to the likes of Toledo, Northern Illinois and Indiana along with a loss this year at Rice.