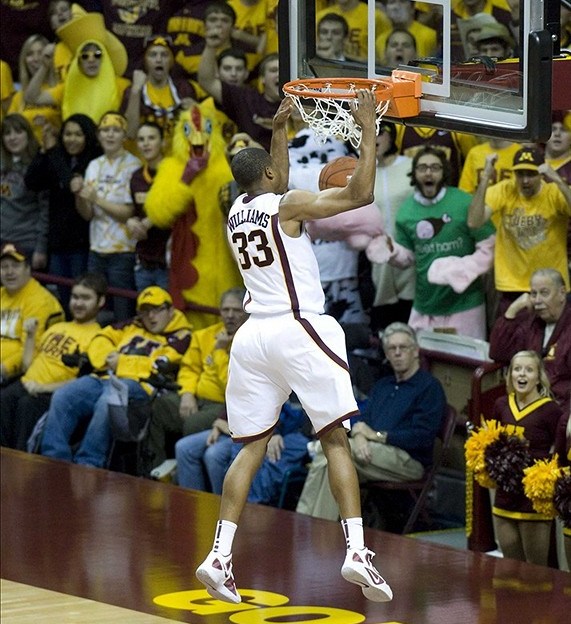 Rodney Williams and Minnesota pulled away from Appalachian State on BTN Tuesday (recap), while Iowa lost at instate rival Northern Iowa (recap). Catch up on all the action on our Big Ten scoreboard. You can also find halftime and final recap stories in this post. And all season long our contributing bloggers, The Big Ten Geeks, offer up their take on the nightly action, so be sure to check out their work. BTN.com web editor Brent Yarina also serves up his Big Ten power rankings every week.

FINAL:  Minnesota used a 18-4 run with 4:46 to go to sew up its 70-56 win over Appalachian State on Tuesday at Williams Arena in Minneapolis. Rodney Williams sparked Minnesota (9-1) as he had 18 points and went 8-of-10 from the field in the win. Julian Welch had a quality shooting game, nailing 4-of-6 shots from the field and scored 15 points. The Golden Gophers hit 56 percent of their field goals (27-of-48). More Minnesota scoring came from Ralph Sampson III, who scored 10 points and Joe Coleman, who scored 10 points. Omar Carter scored 18 points and went 3-of-5 from beyond the arc for Appalachian State (4-4) in the game. The Mountaineers were hot from long range, hitting 9-of-21 threes for a 43 percent night from beyond the arc. Appalachian State also got double-digit efforts from Rodney Milum, who added 16. The Golden Gophers led 15-14 with 9:19 to go in the first half before they widened the margin to 10 points with a 14-5 run that ended in the first. Williams finished the run off with a field goal, which helped Minnesota lead 32-30 at halftime.

HALFTIME: Appalachian State pulled closer to Minnesota going into the break thanks to a 11-3 run late in the half and now trails the Golden Gophers 32-30. It could've been an even dimmer outlook for the Mountaineers, which trailed Minnesota by as many as 10 points with 4:18 to go in the first half. In the second half, the Golden Gophers may look to shut down the excellent long-distance game of Appalachian State, which hit 6-of-10 attempts from three-point range. Rodney Williams' big game so far includes nine points. Rodney Milum led the way for the Mountaineers in the first half, with 13 points.

FINAL: Anthony James led five of Northern Iowa's players in double digits with 18 points as Northern Iowa (8-1) defeated Iowa 80-60 on Tuesday at McLeod Center in Cedar Falls. More the Panthers scoring came from Jake Koch, who had 13, Seth Tuttle, who had 12 points, Marc Sonnen, who scored 11 points, and Chip Rank, who added 10. A 10-0 run led Iowa (5-4) to an early 10-point lead. Eventually though Northern Iowa came back and took the lead, 24-23, on a field goal by Rank. The Panthers shot 11-of-21 from three-point range during the game, good for 52 percent. Northern Iowa went 29-of-33 from the charity stripe as a team (88 percent). Roy Devyn Marble had 14 points and shot 7-of-11 from the field for the Hawkeyes in the loss. Iowa shot 51 percent from the field (28-of-55). The Hawkeyes also got double-digit contributions from Eric May, who scored 10. The Panthers trailed 19-15 with 6:27 to go in the first half, but went on a 17-6 run over the next 6:02 to take a seven-point lead. Rank capped the run off with a free throw that helped the Panthers lead 32-27 at the half. With the win, Northern Iowa extends its winning streak to seven games.

HALFTIME: Chip Rank has 10 points to lead Northern Iowa to a 32-27 lead over Iowa at the end of the first half. The game was tied before the Panthers went into a funk, going the next 2:57 without scoring, and allowing the Hawkeyes to take a 10-0 lead with 16:51 left in the first half. Eight Northern Iowa players scored in the first half. Northern Iowa's leading scorer, Anthony James, has been contained by Iowa thus far. The junior enters halftime with two points, well below his season average of 14. In the second half, the Hawkeyes may look to shut down the excellent long-distance game of the Panthers, who hit 6-of-10 attempts from three-point range. Iowa got points from seven different players. Iowa has generated more of its offensive production from inside the three-point line, making 12-of-18 two-point field goals and hitting 1-of-4 from beyond the arc. The Hawkeyes' Josh Oglesby already has five points.