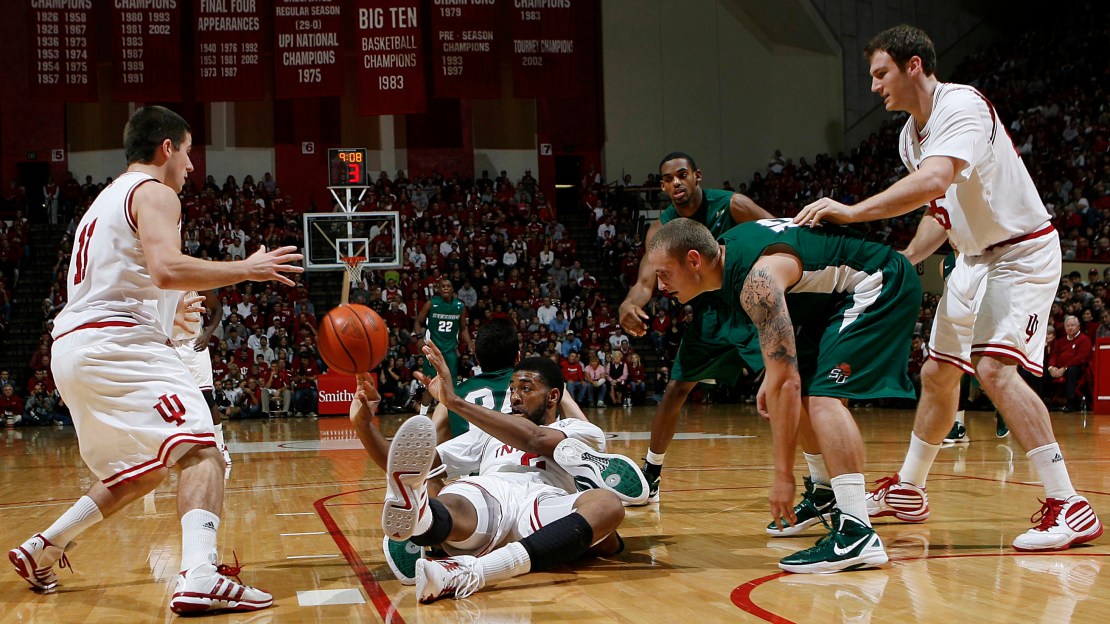 There were five Big Ten men's hoops games Sunday, including a doubleheader on BTN. No. 8 Baylor took down Northwestern (recap) in the first game and Mississippi nipped Penn State (recap) in the nightcap. In other action, Indiana thrashed Stetson (recap), Michigan State drilled Nebraska Omaha (recap) and Creighton topped Nebraska (recap). Get halftime and final recap stories from all the games in this post. Catch up on all the day's action and stats on our Big Ten scoreboard and watch our video from Indiana's victory over Stetson now.

FINAL: Draymond Green scored 23 points and Brandon Wood added 20 points as they teamed up to lead Michigan State to a 110-68 victory over Nebraska-Omaha on Sunday at Jack Breslin Student Events Center in East Lansing. The Spartans beat their season average of 67.7 points per game by a wide margin. Michigan State shot 61 percent from the field (46-of-75). The Spartans shot 8-of-16 from three-point range during the game, good for 50 percent. Keith Appling shot 5-of-6 from the field and scored 13 points for Michigan State. To go along with Green's efforts, Wood's contribution, and Appling's contribution, Adreian Payne recorded 10 points and Derrick Nix scored 10 points. The Mavericks had trouble finding their touch, shooting just 38 percent (22-of-58) from the field. The victory extends the Spartans' winning streak to six games.

FINAL: Pierre Jackson scored 16 points and Quincy Acy added 16 points and six boards as they teamed up to lead No. 8 Baylor to a 69-41 victory over Northwestern on Sunday at Welsh-Ryan Arena in Evanston. The Bears' Jackson had 7-of-8 shooting from the field. Baylor was able to carry momentum into the break and sustain it to start the second half. The Bears were winning 19-16 in the first before they went on a 23-5 run to extend their lead to 21 points early in the second half. Baylor shot 60 percent from the field (29-of-48). Along with Jackson's performance and Acy's stellar play, Perry Jones III totaled 12 points and Brady Heslip chipped in 11 points. Drew Crawford scored 15 points and hauled in five rebounds for the Wildcats in a losing effort. Northwestern struggled from the floor, shooting 25 percent (14-of-57). In addition to Crawford's efforts, John Shurna added 11 points. Winning the battle on the boards was crucial for the Bears as they grabbed 36 rebounds to 25 for the Wildcats. Baylor snapped Northwestern's seven-game winning streak with the victory.

HALFTIME: Pierre Jackson scored 14 points for No. 8 Baylor as the Bears lead Northwestern 38-21 at the half. Leading 25-18, the Bears went on a 10-0 run to open up a 35-18 advantage. The Wildcats distributed the ball with seven assists on eight field goals in the first half. Baylor has been effective inside, making 13-of-15 two-point field goals, but the Bears have struggled on the perimeter, shooting 33 percent (3-of-9) from three-point range.

FINAL: Behind accurate shooting and targeted passing, Indiana topped Stetson 84-50 on Sunday at Assembly Hall in Bloomington. The Hoosiers shot 52 percent from the field (34-of-66). Indiana was able to carry momentum into the break and sustain it to start the second half. The Hoosiers led 31-29 with 34 seconds left in the first half before they widened the margin to 31 points with a 34-5 run that ended in the middle of the second half. Cody Zeller picked up the offensive burden for Indiana, finishing with 16 points and 7-of-11 shooting from the field. Victor Oladipo was 6-of-8 from the floor and chipped in 13 points for the Hoosiers. To go along with Zeller's efforts and Oladipo's stellar play, Jordan Hulls contributed 12 points and Verdell Jones III tallied 11 points. Chris Perez contributed 13 points for the Hatters in the game. Stetson struggled from the floor, shooting 32 percent (17-of-53). The Hatters were hot from long range, hitting 8-of-20 threes for a 40 percent night from beyond the arc.

HALFTIME: Christian Watford has nine points on 4-of-6 shooting to lead Indiana to a 33-29 lead over Stetson at the end of the first half. Things could be worse for the Hatters as the Hoosiers led by as many as 11 with 4:15 to go in the first half. The long-distance game has been bottled up and Indiana might be better served by bringing the ball inside more as the Hoosiers shot 52 percent (14-of-27) on two-point shots, but 1-of-5 from beyond the arc. Stetson fired often and fired with accuracy from distance, hitting 50 percent (4-of-8) of its three-point attempts. The Hatters' leading scorer, Adam Pegg, has been shut down thus far. He enters halftime with two points. Stetson's Aaron Graham had a big first half, with eight points.

FINAL: Bo Spencer led Nebraska with 29 points, but it was not enough as the Cornhuskers fell to No. 22 Creighton 76-66 Sunday at CenturyLink Center Omaha in Omaha. Doug McDermott sparked the Bluejays as he contributed 24 points and knocked down 9-of-15 shot attempts for Creighton in the game. The Bluejays shot 52 percent from the field (26-of-50). In addition to McDermott's efforts, Antoine Young scored 14 points and Grant Gibbs recorded 11 points. Along with Spencer's performance, Toney McCray scored 15 points and Jorge Brian Diaz contributed 10 points.

HALFTIME: While Bo Spencer had a strong first half, Nebraska still trails No. 22 Creighton 32-29 at the half. In the first 20 minutes, the Cornhuskers' Spencer scored 12 points and shot 4-of-4 from the field. The situation might've been even worse for Nebraska, as the Bluejays led by as many as nine points late in the first. Eight Creighton players have scored. Doug McDermott's big game so far includes seven points.

FINAL: Jarvis Summers scored 27 points to lift Mississippi to a 72-70 win over Penn State on Sunday at Bryce Jordan Center in University Park. The Rebels didn't take the lead until Summers hit a field goal with 34 seconds remaining. The Nittany Lions had a rough night from the free throw line, shooting 58 percent (11-of-19). The lead changed hands nine times in a back-and-forth affair. Mississippi hit 47 percent of its field goals (27-of-58). The Rebels were on fire from beyond the arc during the game, shooting 46 percent (11-of-24). Besides Summers' production, Dundrecous Nelson chipped in 14 points, Nick Williams tallied 10 points, and Murphy Holloway added 10 points. Tim Frazier contributed 18 points for Penn State in a losing effort. Sasa Borovnjak had a quality shooting game, nailing 7-of-7 shots from the field and scored 15 points. The Nittany Lions shot 48 percent from the field (26-of-54). Along with Frazier's performance and Borovnjak's contribution, Jermaine Marshall racked up 10 points.

HALFTIME: Jarvis Summers scored 15 points for Mississippi in the first half to carry it to a 35-34 lead over Penn State. Each team took a turn in the driver's seat as the lead changed hands five times. The Rebels led by six points in the first before the Nittany Lions tightened the game back up. Mississippi has been able to make the most of its good looks from long range, hitting at a 55 percent clip (6-of-11). Penn State's Tim Frazier already has 10 points.