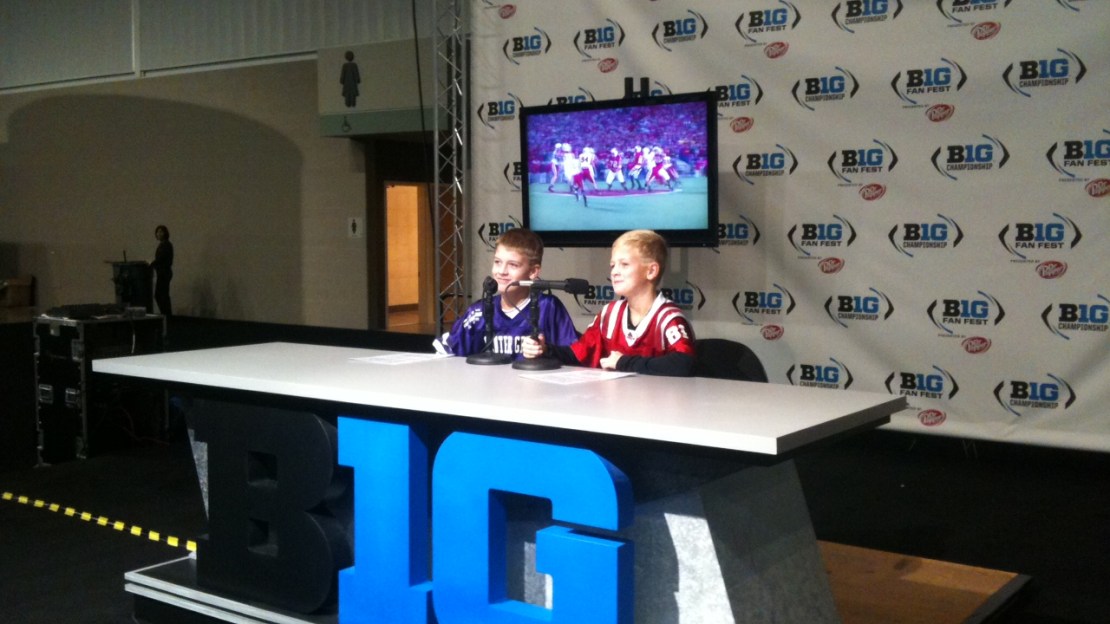 As a BTN.com web editor, I'm in Indianapolis covering the Big Ten Football Championship and filing reports including videos and tweets. I'll also snap off some photos. Follow me on Twitter (@BTNBrentYarina). The Fan Fest has a feature where you can sit at the anchor desk and call a highlight reel. I met the father-son duo of Mark and Andy DeNato and watched them break down the Big Ten title game.

I'm spending most of the day at Fan Fest downtown and then I'll also be covering the atmosphere at the game tonight.

Ran into McNutt at Fan Fest. Asked him about 1-handed grab. His answer: 'I remember thinking to myself, 'Wow, I just caught it.'"

Watch my video with McNutt below. I found a Big Ten replica trophy made from Dr. Pepper and Dr. Pepper 10 cases in the Indiana Convention Center. Very creative. I thought these helmets on the banners just looked cool. This video below kind of illustrates the real cool BTN exhibit here. Fans can stand in the middle of a space and then they recreate the championship stadium all around you with a 360-degree camera.

Below, young fans Emery Brough (left) and Jackson Brough take their turn at playing Dave and Coach at the BTN mock studio. I met the Snow family. I know I've seen them on TV at games. They're all decked out in school colors and them some. On Wisconsin, they say. One of my BTN colleagues sent us these two photos from downtown Indianapolis. Love those street signs. I also came across former Wisconsin quarterback Jim Sorgi talking to fans. Fan Fest is full of former players. Our Tom Dienhart has a little note on Sorgi in his Saturday championship notebook from earlier this morning. The Buckeyes aren't here in Indy this year, but these fans illustrate just how excited and optimistic the fans are, thanks to the hire of Urban Meyer. There are quite a few kids here at Fan fest, which is always fun to see. I've posted a few photos of them above here. But here's a cute one. It's a future Spartan taking a break from all the festivities at Fan Fest. Could he become a Big Ten QB years from now?