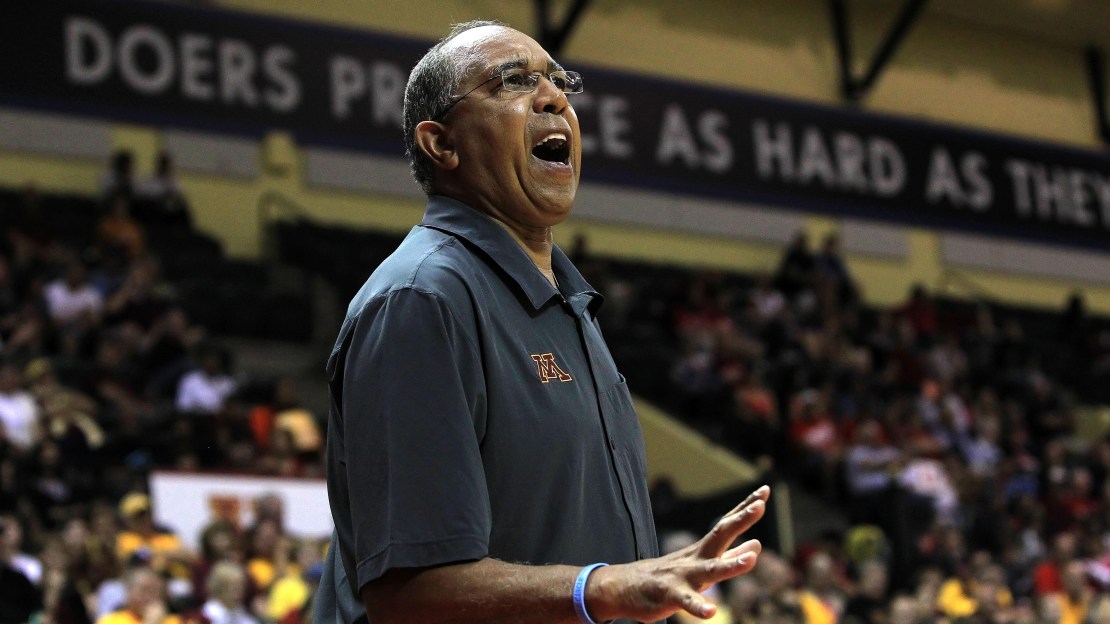 Want to see an amazing 360-degree dunk off the turnover? Check out Rodney Williams throwing it down late in the first half Saturday against USC right here. Five of the seven Big Ten men's teams in action won today.  Click inside this post to get recaps and links to box scores, plus more video highlights.

FINAL RECAP: A run lasting across the halftime break allowed Minnesota to defeat USC 55-40 on Saturday at Williams Arena in Minneapolis.

The Golden Gophers were winning 16-15 in the first before they went on a 25-8 run to extend their lead to 18 points midway through the second half.

Julian Welch gave Minnesota a boost, thanks to 16 points and 6-of-8 shooting from the field.

The Golden Gophers hit 50 percent of their field goals (20-of-40). Along with Welch's performance, Rodney Williams totaled 12 points and Austin Hollins racked up 11 points.

Maurice Jones tallied 14 points for the Trojans in a losing effort. USC shot just 33 percent from the field (16-of-48).

HALFTIME RECAP: Minnesota trailed USC late in the first half before going on a 18-5 run to take a 28-16 lead into the break.

An aggressive offense and the ability to get to the charity stripe allowed the Golden Gophers to take a halftime lead. Minnesota made nine of nine free throws. Leading 16-15, the Golden Gophers went on an 8-0 run to open up a 24-15 advantage.

FINAL RECAP: Iowa started off its game against Brown with an early 21-4 run and never looked back on the way to a 75-54 victory on Saturday at Carver-Hawkeye Arena in Iowa City.

Roy Devyn Marble knocked down a field goal that capped off the run by the Hawkeyes and helped Iowa lead 38-24 at the half. Even in defeat, Andrew McCarthy came through for the Bears with 17 points and 7-of-13 shooting from the field.

Melsahn Basabe sparked the Hawkeyes as he tallied 14 points in the win. Along with Basabe's performance, Marble scored 11 points.

Brown had trouble finding its touch, shooting just 35 percent (21-of-60) from the field.

Free throws played a key role in the outcome, as Iowa not only went to the line nine more times than the Bears, but made the most of its opportunities, shooting 17-of-24. Those free throws came courtesy of 20 fouls committed by Brown who was 8-of-15 from the line..

HALFTIME RECAP: Roy Devyn Marble has 11 points on 4-of-6 shooting to lead Iowa to a 38-24 lead over Brown at the end of the first half. The Hawkeyes were leading 5-4 when they used a 10-0 spurt to widen their advantage to 15-4. Eight Iowa players scored in the first half. Sean McGonagill's big game so far includes six points.

FINAL RECAP: No. 11 Xavier trailed in the closing minutes on Saturday, but took the lead for good on a field goal by Tu Holloway and hung on for a 66-63 win over Purdue at Cintas Center in Cincinnati.

The Musketeers got a spark from Holloway, who poured in 21 points, 5-of-9 shooting from the field, and 3-of-5 shooting from beyond the arc.

Shooting 57 percent (12-of-21) from the line cost the Boilermakers in the close game.

The Musketeers shot 54 percent from the field (22-of-41). Xavier went 16-of-27 from the charity stripe as a team (59 percent). In addition to Holloway's performance, Mark Lyons scored 14 points, Andre Walker totaled 10 points, and Kenny Frease registered 10 points.

Lewis Jackson contributed 12 points and grabbed six rebounds for the Boilermakers in the loss. Kelsey Barlow had a quality shooting game, nailing 4-of-5 shots from the field and scored eight points. Besides Jackson's production, Robbie Hummel scored 17 points.

Winning the rebounding battle was a key to victory for the Musketeers as they outrebounded Purdue 29-23.

HALFTIME RECAP: Lewis Jackson has 10 points to lead Purdue to a 33-22 lead over No. 11 Xavier at the end of the first half. The Musketeers should feel pretty good, considering with 3:44 left in the first half they trailed the Boilermakers by as many as 16 points.

Xavier got points from seven different players. Seven Purdue players have scored. The long-distance game has been bottled up and Purdue might be better served by bringing the ball inside more as the Boilermakers shot 52 percent (11-of-21) on two-point shots, but 1-of-6 from beyond the arc.

Tu Holloway led the way for Xavier in the first half, with four points.

FINAL RECAP: Behind a solid offensive effort, Illinois defeated No. 18 Gonzaga 82-75 in an upset on Saturday at Assembly Hall in Champaign.

Illinois seized command early in the second half. With the game tied 38-38 the Fighting Illini unleashed a 14-4 flurry to take a 10-point advantage with 14:23 in the game.

The Bulldogs can look to its performance from the charity stripe as one of the factors in its loss, as Gonzaga shot 67 percent (18-of-27) from the line.

Meyers Leonard sparked Illinois as he tallied 21 points, hauled in six rebounds, and knocked down 9-of-11 shot attempts for the Fighting Illini in the game. Along with Leonard's work, D.J. Richardson scored 19 points, Brandon Paul contributed 13 points, and Sam Maniscalco added 10 points.

Elias Harris had 19 points and pulled down eight rebounds for the Bulldogs in the game. Gonzaga hit 51 percent of its field goals (26-of-51). Along with Harris' performance, Robert Sacre racked up 16 points and Kevin Pangos registered 11 points.

The win for Illinois breaks the Bulldogs' five-game winning streak.

HALFTIME RECAP: Brandon Paul has seven points on 3-of-5 shooting to lead Illinois to a 38-36 lead over No. 18 Gonzaga at the end of the first half.

Nine Illinois players scored in the first half. Gonzaga got points from seven different players. Gonzaga's Robert Sacre had a big first half, with 14 points.

FINAL RECAP: No. 16 Marquette upset No. 7 Wisconsin on Saturday 61-54 at Kohl Center in Madison.

The Golden Eagles went into the locker room with the momentum and came out of the second half flying as well. Trailing 17-16 with 6:36 to go in the first half, Marquette went on a 21-7 run to seize a 13-point advantage with 17:51 in the game.

Davante Gardner picked up the offensive burden for the Golden Eagles, finishing with eight points, seven rebounds, and 3-of-5 shooting from the field.

Marquette struggled from the floor, shooting 38 percent (23-of-61). For the Golden Eagles, Darius Johnson-Odom scored 17 points and Todd Mayo chipped in 14 points.

Ryan Evans had eight points and yanked down seven rebounds for the Badgers in the game. Wisconsin shot just 32 percent from the field (16-of-50). For the Badgers, Jordan Taylor scored 13 points.

Winning the rebounding battle was a key to victory for Marquette as it outrebounded Wisconsin 41-28.

HALFTIME RECAP: No. 16 Marquette found itself trailing No. 7 Wisconsin late in the first half, but a 16-5 run allowed the Golden Eagles to take a 32-22 lead into halftime.

The Golden Eagles controlled the boards, outrebounding the Badgers 21-13 in the first half.

Seven Wisconsin players scored in the first half.

Jared Berggren, the leading scorer this season for Wisconsin, has not made much of an impact through the first 20 minutes. He enters halftime with two points.

The Badgers moved the ball in the first half, accounting for four assists on six field goals.

FINAL RECAP: Royce White led Iowa State with 22 points and 13 rebounds, but it was not enough as the Cyclones fell to No. 15 Michigan 76-66 Saturday at Crisler Arena in Ann Arbor. Tim Hardaway Jr. and Zack Novak had good games for the Wolverines. Hardaway Jr. tallied 19 points and grabbed six rebounds. Novak had eight points and pulled down 11 rebounds.

Jordan Morgan had a quality shooting game, nailing 7-of-10 shots from the field and scored 16 points. Michigan hit 48 percent of its field goals (27-of-56). In addition to Hardaway Jr.'s production and Morgan's contribution, Trey Burke scored 13 points.

The Cyclones had trouble finding their touch, shooting just 36 percent (24-of-67) from the field. Along with White's performance, Chris Allen registered 11 points.

HALFTIME RECAP: Royce White's been the spark for Iowa State, but the Cyclones trail No. 15 Michigan 34-25 at the break. In the first 20 minutes, Iowa State's White scored nine points, grabbed 10 rebounds, and shot 4-of-7 from the field.

The Wolverines were trailing 23-21 before Michigan went on a 13-2 run to take the lead late in the half. Neither team has been able to take control of the game as the lead changed hands six times.

FINAL RECAP: Texas-Pan American could not keep up with No. 2 Ohio State, as the Buckeyes cruised to a 64-35 win on Saturday at Value City Arena in Columbus.

A run lasting across the halftime break allowed the Buckeyes to grab the advantage. Ohio State was winning 22-12 with 4:28 to go in the first half before it went on a 22-6 run to extend its lead to 26 points in the middle of the second half.

Evan Ravenel gave the Buckeyes a boost, thanks to 11 points, six rebounds, and 3-of-5 shooting from the field. In addition to Ravenel's efforts, Deshaun Thomas scored 11 points.

Jared Maree tallied 13 points and went 6-of-9 from the field for the Broncs in the loss. Texas-Pan American had trouble finding its touch, shooting just 32 percent (13-of-41) from the field.

Winning the battle on the boards was crucial for Ohio State as it grabbed 40 rebounds to 21 for the Broncs. The Buckeyes never trailed. Ohio State's largest lead was 32, which came with 28 seconds to go. The Buckeyes went to the line 11 more times than Texas-Pan American and made the most of their opportunities, shooting 11-of-15. The Broncs committed 12 fouls and made 3-of-4 free throw attempts.

HALFTIME RECAP: No. 2 Ohio State closed the first half strong, using a 9-2 run late in the frame to take a 31-14 lead over Texas-Pan American into the locker room. The Buckeyes are dominating the rebounding battle so far, with a 16-8 margin. Ohio State led by as many as 17 points in the first half and never trailed.

The Buckeyes went on a 7-0 run to open up a 11-2 advantage early in the game. Racking up eight assists on 13 baskets, Ohio State demonstrated its offensive efficiency. The Broncs' leading scorer, Brandon Provost, has been shut down thus far. With three points, he will need a strong second half to get to his usual level of production. Texas-Pan American distributed the ball with four assists on four field goals in the first half. Evan Ravenel led the way for the Buckeyes in the first half, with six points. The Broncs' Ruben Cabrera already has five points.