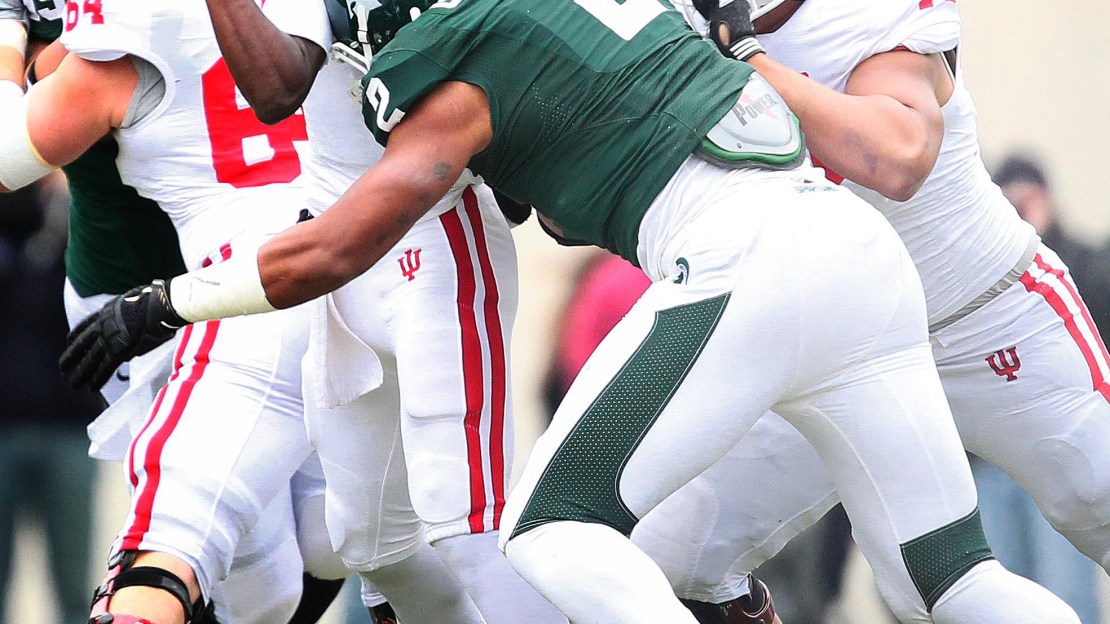 INDIANAPOLIS-Michigan State is hungry for its first Rose Bowl appearance since the 1987 season. It also is motivated to earn some respect. This is a program that has the best league record in the Big Ten over the past four years. This is a program that has won 10-games in consecutive seasons for the first time ever and is aiming for its first back-to-back Big Ten titles since 1965-66.

Odds makers don?t feel it, as Michigan State is a 9.5-point underdog to Wisconsin in tonight?s game. And, know this: The Spartans have three of the last four meetings with the Badgers.

"As far as being underdogs, we've been underdogs in five or six games this year,? said Michigan State coach Mark Dantonio. ?So it really, we're sort of unfazed by it. Don't worry about the so called ?experts.? The experts are in that locker room and we're the coaches. We're the people that study that film, and go out and play it and live it, and Wisconsin's locker room, they're the experts. So the match ups are there. We understand the match ups and we understand each other very well."

Michigan State felt like it deserved a BCS bowl slot last season, when it finished in a three-way tie for first with Ohio State and Wisconsin. Alas, Michigan State was left out of the BCS bowl mix and ended up in the Capital One Bowl vs. Alabama.

??We felt like we were the odd man out,?? said Dantonio. ??We felt like we should have, at the very least, gone to a BCS game.??
Dantonio is pulling out all the stops to keep his players on task and motivated, even putting roses in the locker room this week.

And MSU offensive line coach Mark Staten swung by the Rose Bowl during a recruiting trip over the summer and brought back a bunch of rocks.

"So we broke them up and gave everybody a little rock,? said Dantonio. ?We'll do whatever it takes to keep that focus in front of them.

"We've always had subliminal message to our players, I guess. We've got Rose Bowl [reminders] up around our facility … to just continually remind them about what we're trying to accomplish."

Inside game: Playing in a dome will be a new experience for most of the players. That?s what?s why Wisconsin coach Bret Bielema wanted to make sure his players were ready. So, he went to a trusted source: former Indianapolis Colts and Wisconsin quarterback Jim Sorgi.

?He said the first time going one way has some low suites that you need to be aware of,? said Bielema. ?He said it was unusual the first time you see it."

Sorgi also advised Bielema to make sure the players drank plenty of fluids, as the indoor environment can get humid. But overall, no one has any complaints about state-of-the-art Lucas Oil Stadium, the place that Peyton Manning built.

"This place, all I can do is say, 'Wow,' because it's pretty spectacular," Dantonio said. "One guy called this week and said they might open the roof, but I checked. They're not going to do that."

No doubt, it beats playing outside.

"I would much rather have the game be decided by the two teams on the field, and have a great environment for fans, rather than try to put together a game plan that is heavily affected by weather," Bielema said of his preference for Indianapolis.

?We're not going to set up a score on the 1-yard line or something to help him get it,? said Bielema. ?We'll let things come as they naturally do in the course of the game."

He didn?t play the last time the teams met, as he was suspended for punching Michigan tackle Taylor Lewan. Gholston could play a big role in slowing down Wisconsin?s formidable ground attack.

"With Will Gholston, he's a bigger guy," Dantonio said. "He's 6-foot-6 plus, 280 pounds, he has extremely long arms. So from just a passer standpoint, it's going to be more difficult to throw over him, I would think.

"He plays extremely hard, he'll be very motivated to play. Obviously he can track people down. He's an outstanding football player. When you're a dominant player and an impact player, you need to take over a football game somewhat. So whether he takes it over or not, I'm not sure. He's only a sophomore. He has the ability to have huge plays and create a lot of problems for an offense."

Getting together: If not for a player?s only meeting after a 33-29 loss at Ohio State-Wisconsin?s second defeat in a row that dropped it to 2-2 in the Big Ten-the Badgers may not be in Indianapolis playing for the Big Ten title and chance to advance to the Rose Bowl for a second season in a row. The confab was organized by captains Russell Wilson and Aaron Henry.

"They talked to us," Ball said. "They sat us down and told us: 'It is what it is. We lost two games, but it's not the end of the season. The season is going to keep coming, so we've got to make sure we prepare just as hard.'?"

Wisconsin proceeded to rip off four victories in a row-and get a little help with some other teams losing-to find itself in this spot.
"I'm a teammate and I think anybody, if they have anything to say, should say something," Wilson said. "I just wanted to let the guys know we still had a lot to look forward to .?.?. If you love the game you have to bring it every single day.

"And that's what I talked to the guys about. Forget all the noise and just focus on what we need to focus on. And that's to play the best football we can play from here on out. I think we've done that."

Health report: Each team comes into the game relatively injury-free. But Wisconsin still could be without star center Peter Konz, who has missed the last two games with an ankle injury. He didn?t see much practice time leading up to tonight?s game.

?It?s kind of at a point with us where, do we want Pete who hasn?t been repping, or do we want to play with (left guard) Ryan Groy and Travis, who have done an outstanding job the last two weeks?? Bielema said.

Michigan State will have sophomore cornerback Darqueze Dennard in the starting lineup. He had missed the past two games with an ankle injury. The Spartans also will have redshirt freshman Kurtis Drummond on hand after he missed last week?s game a head injury.