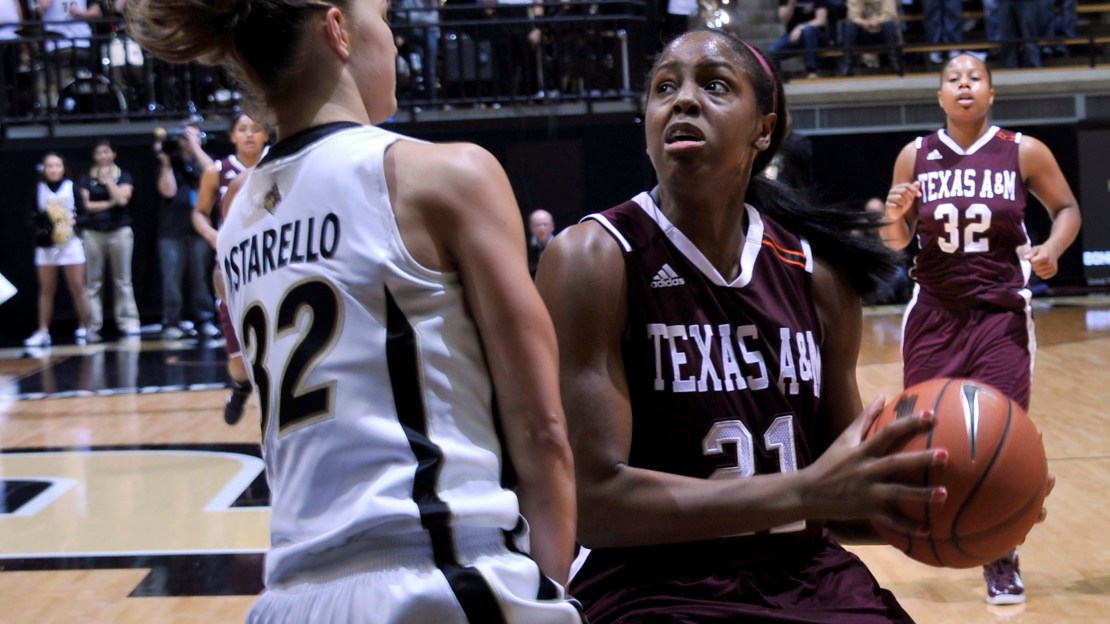 Sunday featured six Big Ten women's hoops games, including three that pit Big Ten teams against top 25 competition. No. 13 Purdue defeated reigning national champ and No. 4 Texas A&M, 60-51, three days after it lost to No. 7 Duke. The victory marked Purdue's first win over a ranked nonconference foe since 2009. Catch up on all the action in this post and on our Big Ten scoreboard. Also, watch our highlights from Purdue's impressive upset win now.

(AP) Courtney Moses scored 15 points and Brittany Rayburn added 14 to help No. 13 Purdue defeat No. 4 Texas A&M 60-51 on Sunday in the Big 12/Big Ten Challenge. The defending national champion Aggies (6-1) saw their winning streak end at 12 games. A win would have set a new school record for consecutive victories. They might now face a losing streak – Texas A&M plays at Connecticut on Tuesday night. Purdue (7-1) bounced back after a 64-53 loss at No. 7 Duke on Thursday. It was Purdue's first win over a ranked non-conference opponent since beating Texas in 2009.

(IUHoosiers.com) The Indiana women?s basketball team could not keep pace with Oklahoma State on Sunday at Assembly Hall, falling to the Cowgirls, 83-72.  Aulani Sinclair tied her career-high with 23 points to lead the Hoosiers in the scoring column.  Sasha Chaplin finished with 13 points as Danilsa Andujar achieved the second double-double of her career with a career-best 11 points and a season-high 11 rebounds. Indiana (2-5) trailed in the early going, 13-8, as Oklahoma State (4-0) had the early momentum.  Sinclair hit her second 3-point field goal of the game, and after an OSU field goal, Sinclair nailed another from beyond the arc to make the deficit just one, 15-14, with 11:47 left in the first half.

(MGoBlue.com) The University of Michigan women's basketball team used a late run to wear down Iowa State, defeating the Cyclones, 56-49, on Sunday afternoon at Crisler Arena. The Wolverines found themselves down 37-32 with 10 minutes left in the game but scored 11 consecutive points during a 16-5 run to take the lead for the remainder of the game. Courtney Boylan led all players with 17 points on 5-of-9 shooting, adding four rebounds and two assists.

(AP) Brittney Griner scored 20 points and grabbed nine rebounds while Odyssey Sims added 15 points to help No. 1 Baylor roll to a 89-60 victory at Minnesota on Sunday. The Lady Bears (8-0) were never really threatened in the Big 12/Big Ten Challenge game against the Gophers (4-5). Rachel Banham scored 19 points to lead Minnesota, which has now lost three of four. Leah Cotton added 14 and Kiara Buford scored 13 for the Gophers.

(AP) Tayler Hill scored 20 points and Samantha Prahalis added 19 for No. 17 Ohio State, which made its first nine shots of the game in a 69-63 victory over No. 18 Oklahoma on Sunday in the Big 12/Big Ten Challenge. Ohio State (7-0) led the whole way in its first road game of the season. The Buckeyes are 4-0 all-time against Oklahoma (3-2), which lost its second straight game, having fallen at Vanderbilt on Nov. 26. The Buckeyes were up 7-0 before the Sooners took their first shot. Ohio State's opening streak included 3-pointers by Hill and Prahalis and made it 23-10 less than 7 minutes into the game.