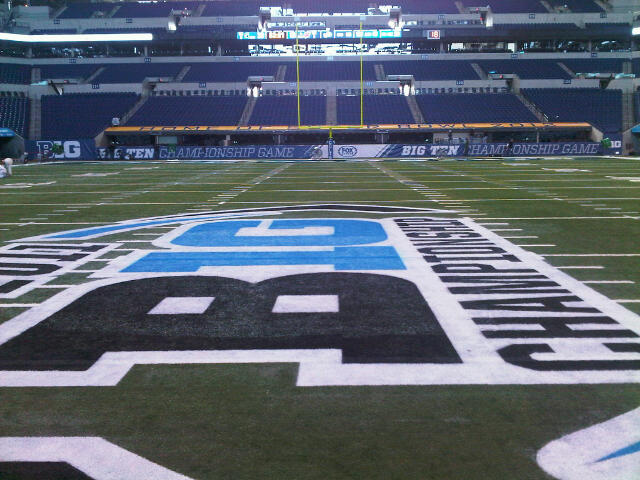 Can Saturday's Big Ten Football Championship match the excitement of the last game between Michigan State and Wisconsin (see video in this post)? We're in Indianapolis Friday for complete coverage leading up to the game and kick it off with a feature story on the importance of the event by BTN.com's Tom Dienhart. At 4 p.m. ET watch the teams' press conferences live on TV and streamed live on BTN.com. Then at 6:30 p.m catch The Big Ten Pulse followed by a special Big Ten Football Report: Championship Preview at 9 p.m. Find our Saturday TV plans inside and read more news from the past few days over here.

Are you on Twitter? Use hashtag #B1GFCG through Saturday night and follow BTN.com's Tom Dienhart (@BTNTomDienhart) and Brent Yarina (BTNBrentYarina) live from the title site. We also feed game-related news and live in-game updates to @BTN_Wisconsin and @BTN_Michigan_St. Other recommended follows from the title game site: @BTNDaveRevsine, @GerryDiNardo, @HowardGriffith, @BTNGlenMason, @BTNStatsGuy, and @BTNLive. Want a sneak peak at the stadium field? Look further down in this post … We'll also be collecting their best BTN tweets all weekend but here's a sampling from our BTN team so far this week:

No arguing with a Wisconsin-Michigan State title game. The two best teams will meet in a rematch of what was the best game of the season.

It's hard to tell which team is more motivated 4 B1G Championship Game. I'm convinced they are both highly motivated – #Spartans #Badgers