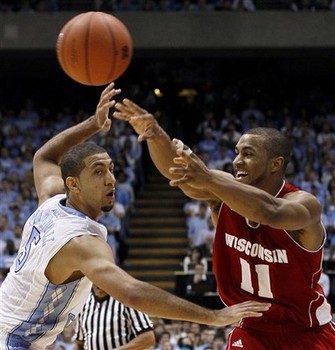 Two nights does not a season make, but the Big Ten certainly boosted their reputation as the nation's preeminent basketball conference by wrapping up the Big Ten/ACC Challenge by an 8-4 margin. But beyond the scope of the Challenge, there are resumes to be built here–let's see who hurt and helped their cause this week.

Wisconsin showed that their gaudy efficiency numbers aren't just the result of smashing cupcakes in an impressive effort at North Carolina. Sure, the Badgers lost, but losing by one possession in Chapel Hill is about as encouraging as losses get. Bo Ryan's team did a great job defensively against the uber-talented Tarheels, holding them right around a point per trip–North Carolina's lowest output excluding outdoor games–but the Badgers just couldn't produce enough offense to get over the hump. Ryan's shot maximization strategy worked, as Wisconsin hoisted 64 shots in 61 possessions, but they made too few of them. Most glaringly, the Badgers shot just 29 percent on their many three-point attempts. With almost nothing coming from the free throw line (as has been the standard for Wisconsin), the output of 0.94 points per trip was just not quite enough.

Jordan Taylor led the Badgers with 18 points, but it took him an inefficient 20 shots to get there. Ben Brust and Jared Berggren performed well in hostile conditions, combining for 23 points on 21 shots. UNC has multiple NBA bigs, and Berggren looked like the best big man on the floor. Kudos to my partner Josh, who has been on the Berggren bandwagon for awhile now.

Indiana answered some lingering questions with an 11 point road victory over a decent NC State squad. The Wolfpack aren't good defensively, but Indiana's 1.18 efficiency is still the highest NC State has allowed all season, and they've faced some solid teams in Vanderbilt and Texas.

Three-point accuracy really boosted the Indiana attack, led by Jordan Hulls and Christian Watford (a combined six for nine from deep). Cody Zeller had the most aggressive shooting game of his young career, scoring 19 points on 14 shots.

The Hoosier defense surrendered over a point per trip for the first time this season, but that's still a good defensive effort considering NC State's usual output. The computers are loving Indiana's start to the season, as they've moved up to 17th in the nation in Ken Pomeroy's ratings. We Geeks maintain a bit of skepticism that they are truly that good, but it's probably time to admit that the Hoosiers are better than we thought they would be. We'll learn a lot more as they face some actual tournament level teams, but winning comfortably at NC State is no easy task.

Michigan State put together a very nice performance against a good team in beating Florida State by 16 points. When we talk about the Seminoles, we're talking about suffocating defense, so the 1.04 efficiency posted by Tom Izzo's team is actually quite good. In fact, the Spartans join Connecticut as the only teams to score over a point per trip on Florida State so far, and that list may not get much longer–last season only five teams managed it (UNC, Butler, Maryland, Virginia Tech, and Clemson). Brandon Wood had his finest game as a Spartan, posting 15 points, 10 rebounds, and 5 assists without turning it over once. Keith Appling had 24 points and seven boards but turned it over four times.

The offensive end isn't the only place Michigan State played well. While Florida State's offense is quite dysfunctional, keeping them below 0.80 points per trip is still impressive. Michigan State now has the nation's fourth best defense according to adjusted efficiency, joining Wisconsin and Ohio State in the top five. The hallmarks of a great Izzo defense are there–defensive rebounding and field goal defense–but perhaps most surprising is the way Izzo's team is forcing turnovers. Take a look at how this squad compares in this way to Spartans past:

It's still early, but this could be one of the better Michigan State defenses of the Izzo era, which is amazing given the loss of a very good defender in Delvon Roe. The offense needs a lot of work, but this will not be a fun team to play against.

Minnesota was without big men Trevor Mbakwe and Ralph Sampson, but the remaining ragtag bunch was able to defeat a solid Virginia Tech team. Amazingly, the shorthanded Gophers did their damage inside, shooting 63 percent on twos and grabbing nearly 40 percent of their misses. That and a markedly lower turnover rate were enough for 1.08 points per possession, making Minnesota just the second team to eclipse a point per trip on VT (Syracuse was the other). This was an inspired offensive performance given the circumstances, though the 58-55 final (in just 54 possessions) will prevent casual observers from recognizing it.

Rodney Williams and Eliott Eliason did the dirty work inside, combining for 22 points and 15 rebounds. Julian Welch had some turnover issues, but he scored 15 points on just six shots.

I really doubt the Gophers can remain a tournament contender without Mbakwe, but this was a solid win against what could end up being a bubble team. The schedule certainly sets up nicely for an adjustment period, as the next five games are at home against beatable teams.

Nebraska suffered a crippling home loss to Wake Forest. The Huskers' late game execution can certainly be questioned, as per usual in a close loss, but the bigger issue is that this game was even close in the first place. Wake Forest is monumentally bad for a major conference team, and Nebraska was playing at home.

The Huskers did a decent job defensively, but Wake's zone defense befuddled Doc Sadler's team. Nebraska resorted to lots of three-pointers, and they shot 26 percent on them. All that perimeter action did keep Nebraska's turnover rate low, but it also resulted in them attempting just four free throws.

It's back to the drawing board for Sadler. Any hopes of an at-large worthy resume may have been dashed by this loss, although a win at Creighton on Sunday could start to ease the pain.

Penn State did their part for the conference with a comfortable road win over Boston College. I was probably premature when I called Wake Forest monumentally bad–that title belongs more justly to the Eagles of Boston College, who have a legitimate chance of going winless in the ACC (though they do get to play Wake twice).

The Nittany Lions won with their defense, holding Boston College to 0.82 points per trip. On offense, Jermaine Marshall made a guest apperance on the Tim Frazier show–the duo combined for 44 points on 28 shots, and Marshall grabbed eight defensive rebounds. Frazier found himself in foul trouble and turned it over seven times, so it's a good thing Marshall showed up.

So ends another edition of the Big Ten/ACC Challenge. As always, it was a lot of fun to watch, and it's even more fun when the good guys win. Things will be quiet for a couple days, as most of the conference doesn't play again until Saturday or Sunday, but there are some big matchups looming:

The work of the nation's best conference is never done, but somebody has to do it.