Bedeviled by the Big Ten 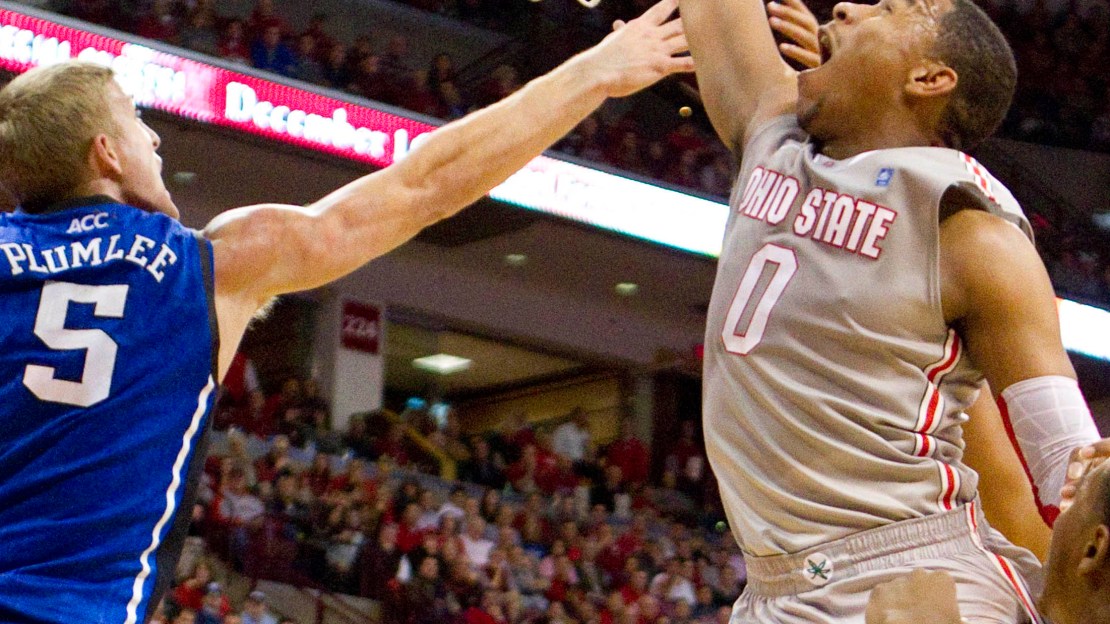 The Big Ten/ACC Challenge tipped off last night, and it was (as expected) a good night for the midwesterners. The Big Ten now leads the Challenge four games to two heading into tonight's action. Let's run down how the good guys got there.

In the night's marquee matchup, Ohio State put on a stunning display of dominance against the Duke Blue Devils, winning by a 22-point margin that barely captures how lopsided it really was. The Buckeyes jumped on Duke right out of the gate, leading 11-0 early, but the Blue Devils responded to temporarily make it close. Ohio State's offense, however, was simply a wrecking ball that couldn't be stopped, and they took a 19-point lead into halftime. Things didn't get any better for Duke after the break, as the lead swelled as large as 25 points. All told, the Buckeyes hung 1.28 points per possession on what was previously looking like a very good defense. Ohio State also became the first team to hold Duke below a point per trip since the ACC Tournament. This was a dominating performance at both ends, and it confirms that Thad Matta has assembled a force to be reckoned with.

Michigan ran into one of the nation's better defenses in a 12 point loss at Virginia. This one started out true to form, as both teams struggled to stay above a 40 point pace for much of the first half. The Wolverines couldn't be too upset with the one point halftime deficit considering Tim Hardaway Jr. had been limited to six minutes by foul trouble.

After the break, both offenses started to get on track, and the game was tied at 41 with 10 minutes remaining when Evan Smotrycz picked up his fourth foul. Michigan went small, as they often have this season, and Virginia's Mike Scott absolutely killed them. Scott's fingerprints were all over a 12-0 Cavaliers run that effectively sealed Michigan's fate. From then on, the Wolverines were playing catch-up,  and their offense became disjointed and hurried. A comeback was not in the cards.

We've harped on this issue before, but it's valid to question whether John Beilein should have followed the automatic benching rule when Hardaway picked up his second foul. In his Michigan career, Hardaway has averaged just 2.46 fouls per 40 minutes, and he has never fouled out. I can understand taking Hardaway out for a few minutes to clear his head, but benching him for the final 14 minutes of the first half seems unnecessary and clearly weakens your team.

Sure, Michigan kept pace with Virginia while Hardaway watched, but they might have been able to build a lead. Furthermore, when Hardaway did return, he was out of the flow of the game. The sophomore ended up scoring just five points on nine shots, and the Wolverines posted their lowest efficiency of the season.

Illinois once again looked like a different team after intermission, but this time the pendulum swung to the positive side in a nine point win at Maryland. In the first half, Bruce Weber's team was foul-happy and allowed a poor Terps offense to shoot 60 percent on twos. Coupled with Illinois' own high turnover rate, it was somewhat amazing that Maryland led by only four at the break.

In the second half, however, the Illini played some excellent basketball, using a tiny turnover rate and plenty of offensive rebounds to maximize their looks at the hoop. Sam Maniscalco made the most of those opportunities, scoring 24 points on just 11 shots. All told, the developing Illinois offense made it four straight games above 1.12 points per trip, and they again did it without shooting all that well.

On that point, it's not hard to see that this Illinois team relies far less on the jump shot than last season's edition, but let's put some numbers to that claim. Here's a comparison of how many times Illinois shot under a 50 percent effective field goal percentage and how the offense performed in those games:

You can look at this in a couple ways. The negative is that Illinois is clearly a worse shooting team than they were a season ago, as over half of their games so far have resulted in an effective field goal percentage below 50. The positive is that Illinois has found ways to score even when they aren't shooting well, something they were unable to do last year.

An interesting tidbit about this game–Illinois shot 18 for 20 from the foul line, and on the two misses, Brandon Paul grabbed the offensive rebound and either scored or got fouled. That'll boost your efficiency. Paul finished with 17 points and seven rebounds, all on effort, as he tries to work his way through a shooting slump.

This is a solid road win for Illinois, though Maryland will certainly have its struggles this season. It may not have helped that the home crowd seemed to be cheering for some team named "Shut Up Bruce" more than the Terrapins.

Northwestern put together a nice effort at both ends of the floor in an easy win at Georgia Tech. The Wildcats led this one wire-to-wire, but they were really able to pull away in the second half when their defense locked down. Yes, Northwestern's defense locked somebody down:

After intermission, Georgia Tech scored just 0.66 points per possession. The Yellow Jackets are a bad offensive team, sure, but that's still a great sign for Bill Carmody's squad and their NCAA Tournament hopes.

Georgia Tech does have a good defense, and they were unable to slow a well-executed Northwestern attack. The Wildcats have played well enough in their 6-0 start that they're now 35th nationally in Ken Pomeroy's efficiency ratings. It's still early, but Northwestern is playing at the level of an at-large contender. They'll get a chance to prove it against a similarly-undefeated Baylor team on Sunday.

Purdue made a concerted effort to get the ball into the paint against Miami, and it paid dividends. Brawny big man Sandi Marcius got his third start of the season, and his early involvement in the offense surely must have been the result of a Matt Painter directive.

Marcius himself didn't end up doing a whole lot, but the rest of the Boilers repeatedly used dribble penetration to get inside on the short Hurricanes. The result was a sizzling 71 percent conversion rate on twos and 29 free throw attempts, both great numbers for a Purdue side that has often looked overly reliant on the jump shot.

Purdue's 1.19 efficiency is easily the highest allowed by Miami this season, yet another data point suggesting that this Boilermaker offense is legit. Even more encouraging is the fact that they did it without Robbie Hummel taking a huge shot diet–the senior forward settled into his well worn ultra-efficient complementary role while Lewis Jackson, Terone Johnson, and Anthony Johnson sliced up the defense. That's a great sign going forward.

Things continued to fall apart for Iowa in a blowout home loss to Clemson. The Hawkeyes couldn't throw it in the ocean as they shot 29 percent on twos and 27 percent on threes. The resulting 0.80 points per possession looks awfully similar to the output in Iowa's other two losses–these Hawkeyes clearly have a tendency to go ice cold for long stretches. Freshman Josh Oglesby was the lone bright spot, scoring 15 points on nine shots. Fran McCaffery appears to have his work cut out for him, and Penn State suddenly might have a chance to finish above somebody in the Big Ten.

Pomeroy's computer doesn't know that Trevor Mbakwe is out for the season, so Minnesota's chances are overstated, and I know a lot of people have trouble believing that Wisconsin should be favored at North Carolina. Even given those caveats, it's hard to see how the Big Ten doesn't get the necessary three victories tonight. Perhaps most importantly, we get a chance to learn a whole lot more about these teams, especially an Indiana team that faces its toughest test yet on the road against a decent NC State squad. Enjoy the hoops and get your east coast pals on speed dial.