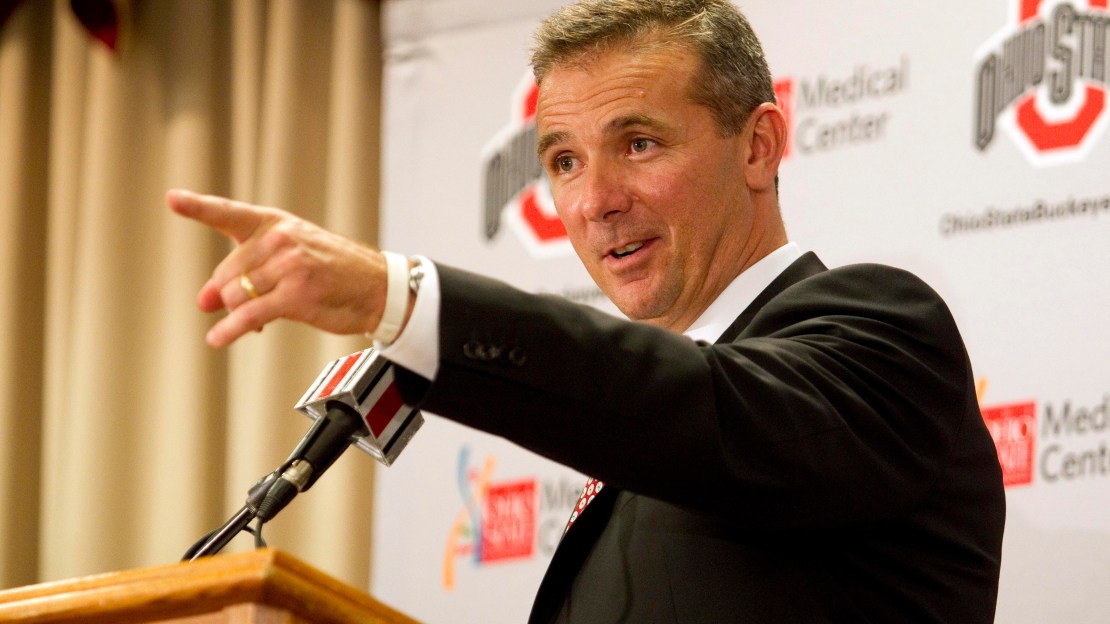 And recruit? Few have done it better than Meyer, who annually inked one of the top recruiting classes in the nation in each of his seasons in Gainesville.

Add it all up, and Meyer is an all-time great before he?s 50.

Meyer couldn?t have imagined himself in this spot a year ago.

?A year ago in my mind, I was done coaching,? Meyer said. ?I had no idea it was gonna be a year.?

Meyer looks good. He sounds good. But questions beg. In particular, is Meyer healthy? The freshly minted Ohio State coach wasn?t very deep into the press conference before the issue came up.

It wasn?t long ago when Meyer was lying on a floor, feeling like he never had felt before. Was it a heart attack? He didn?t know what was wrong. He was just scared to death and taken to the hospital.

?I?ve been to a place I don?t want to go back,? said Meyer, referring to his health issues.

Meyer swears he?s fine. He swears he has learned. He swears he has new-found balance in his life and won?t become a victim of 80-hour work weeks and try to be everything to everyone, which he says often was the case his last few years at Florida.

Still, we won?t know the real answer until Meyer is neck deep in work, trying to build a staff, organize a program and on and on it goes with a seemingly endless to-do list that every major coach faces.

And how long is Meyer in it for? Three years? Five years? Ten years? He?s only 47, but he never has been in any job for more than the six years he was at Florida.

But Meyer was just focused on today, talking about building a staff, precocious quarterback Braxton Miller and spring ball-among other things.

Pressure? Meyer knows it?s there. He?s an Ohio native and former Buckeye G.A. Meyer will walk into one of the best jobs in America, where the budget is fat, the facilities are fine and the tradition runs deep and thick at a place that sits in the middle of some of the best talent in America.

Watch the Meyer press conference in its entirety and continue reading below the video.

Jim Tressel made Ohio State the top program in the Big Ten, winning a conference record six league titles in a row from 2005-10 before leaving amid NCAA scandal. Probation looms for the Buckeyes, which could complicate Meyer?s job.

?I don?t think it?s broke,? Meyer said of Ohio State. ?But I think there are some mistakes that have been made but are correctable.?

Another issue for Meyer: Wisconsin. The Badgers look like the top program in the Big Ten. And they just happen to reside in the Buckeyes? division. And if Ohio State scales the Leaders Division, it then must deal with the likes of Michigan State, Nebraska, Michigan and Iowa, all which are going strong.

Bottom line: The Big Ten won?t be easy to dominate, which means feeding the Ohio State monster will be difficult.

Tressel got one national crown, in 2002. If Meyer wants to add to the trophy case, he?ll have to battle the league he left, the SEC, which is primed to win its sixth BCS title in a row this year.

?The Big Ten isn?t that far behind,? Meyer said.

Which leads me to wonder ?

Does Meyer still have his fastball? Meyer?s last season at Florida, the Gators went 8-5. The team struggled for an offensive identity without superman Tim Tebow running the show. The players he left new Florida coach Will Muschamp just finished the regular season 6-6 overall and 3-5 in the SEC. Some conspiracy theorists think Meyer bolted Florida more to avoid a slipping program than over concerns about health and family.

And Meyer had his share of off-field issues with players, with various outlets stating that there were over 30 arrests during his tenure. Meyer says those numbers are inflated.

?We didn?t have bad guys, but they made some stupid mistakes,? said Meyer.

Regardless, Ohio State is excited to have Meyer. And Meyer is ready to go. He gave this a lot of thought, consulting with his family before plunging back into the coaching business after a year working for ESPN. Meyer even held up a folded piece of paper, a contract he says his family made him sign before taking the job. It supposedly is filled with lifestyle related clauses.

?I had to sign this before I signed my other one,? said Meyer. ?This is my home state. And it?s good to be home.?