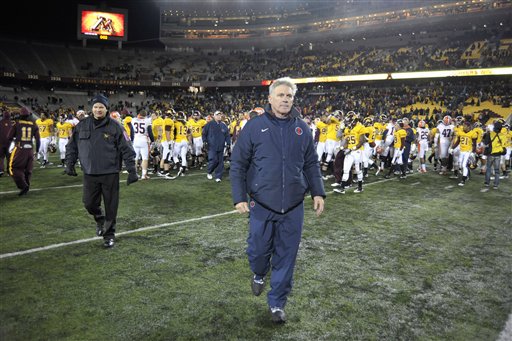 In the end, Ron Zook couldn?t make Illinois a consistent winner. So, the school announced today that it?s turning the page by firing him after seven seasons. The Zook era will be remembered for tremendous highs and lows, finishing with a 34-51 mark and two bowls. The zenith of his tenure was a trip to the Rose Bowl following the 2007 season, the program?s first junket to Pasadena since the 1983 season. That year, Illinois finished as Big Ten runners-up and knocked off an unbeaten Ohio State team on the road.

But Zook?s tenure also saw four losing seasons, including a 2-10 mark in 2006. And his Big Ten mark was miserable, forging an 18-37 record as he won just one conference game his first two seasons on the job. There also were some dubious losses to the likes of Western Michigan, Fresno State and Ohio. Zook also went 0-4 vs. Missouri.

This year will go down in history, as Illinois became the first school to open 6-0 and then lose its last six games capped by a 27-7 loss at Minnesota on Saturday. By then, the school had seen enough.

Zook?s tenure also was noteworthy for his ample recruiting ability that saw Illinois reel in some top players, including Arrelious Benn and Juice Williams.

What?s next for Illinois? Don?t be shocked if the school hires a coach who is the opposite of Zook, 57, in many respects. Upon arriving after three years as head coach at Florida in 2005, Zook was an experienced head coach with years of experience as an assistant who had no ties to the school. Zook didn?t really have an offensive or defensive background, as he was a special teams coach. But given the program?s struggles on offense, I wouldn?t be shocked if Illinois targets coaches from the offensive side of the ball.

What?s it all mean? Illinois may be willing to take a chance on a candidate who never has been a head coach. A top target would have to be Wisconsin offensive coordinator Paul Chryst, who has interviewed for positions in recent years and is considered by many to be the top assistant in the nation.

Houston head coach Kevin Sumlin also would seem to be a natural target, given his success with the Cougars and the fact he?s a Purdue grad and former Boilermaker assistant who hails from Indianapolis. Sumlin also has been an assistant at Minnesota.

And don?t discount Kirby Wilson, the Pittsburgh Steelers running backs coach and former Illini player. He has an extensive background in the pro and college ranks, working for some bright minds like Mike Tomlin and Pete Carroll, among others. He?s ready for an opportunity and knows the right people.

For years, the Illinois job has been considered a sleeping giant, but no one has been able to awaken this giant. Mike White, John Mackovic, Lou Tepper and Ron Turner all enjoyed success like Zook, but none had extended success. Illinois hasn?t been to consecutive bowls since going to five in a row from 1988-92.

The next coach will walk into a good situation, as facilities recently have been upgraded and there?s talent on the roster. But it will be vital to build a good staff, keep it together and do a better job of keeping in-state talent home while continuing to push recruiting boundaries.

But the new coach must give Illinois an identity. Will it be a defensive program? Will it be one that builds around a stud quarterback the program has a history of producing, including the likes of Dave Wilson, Tony Eason, Jack Trudeau and Jeff George?

Competition will be stiff in the Leaders Division, with Wisconsin seemingly primed for a run of strong success. But Penn State will be in transition under a new coach, while Ohio State also will have to deal with the effects of an impending probation. So, there seemingly will be opportunity to move up the pecking order quickly.

Bottom line: This is a good job, as new athletic director Mike Thomas will have a strong list of candidates to pick from.