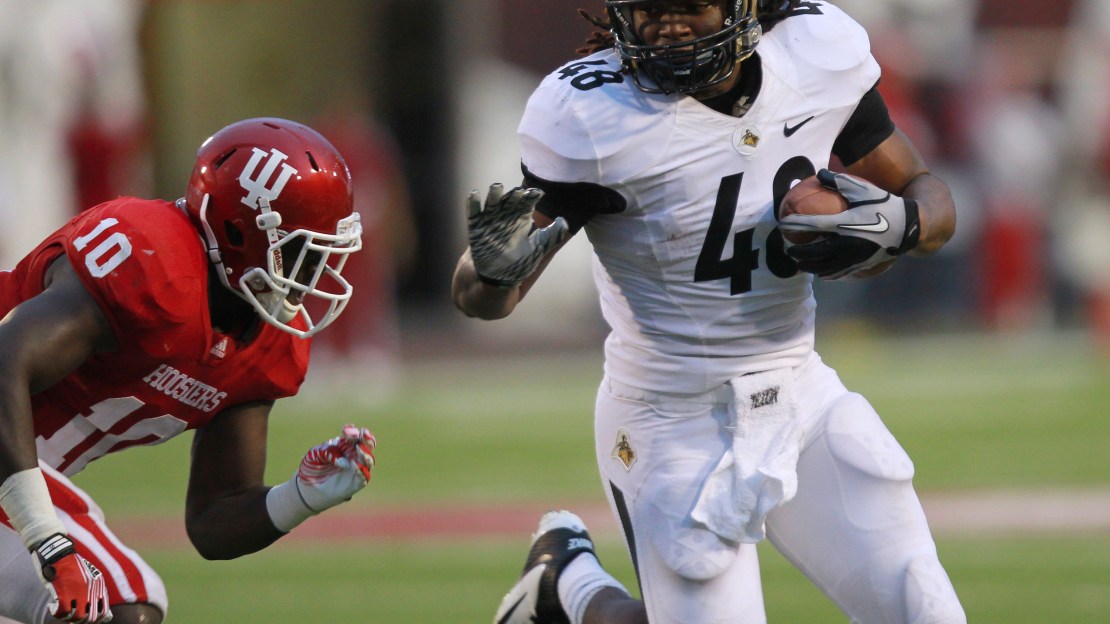 (AP) Ralph Bolden scored one touchdown, Caleb TerBush threw for another and Carson Wiggs made four field goals Saturday to lead Purdue past Indiana 33-25 for the Old Oaken Bucket. The victory makes Purdue (6-6, 4-4 Big Ten) bowl-eligible for the first time under coach Danny Hope. But the Boilermakers are not guaranteed a bowl spot because 10 Big Ten teams are eligible for the league's eight bowl berths. The milestone victory also was tarnished by a third-quarter injury to Bolden, who appeared to injure his right knee and did not finish the game. Indiana (1-10, 0-8) finished the season on a nine-game losing streak and is the only BCS conference team not to beat a Football Bowl Subdivision foe. Read the full AP recap, see the box score and view our Big Ten scoreboard.

FINAL: Purdue beat Indiana 33-25 on Saturday at Memorial Stadium thanks to a tag-team effort from Antavian Edison and Ralph Bolden. Edison ran for 26 yards and one touchdown and caught three passes for 50 yards and one touchdown. Bolden ran for 55 yards and one touchdown and caught four passes for 62 yards. Indiana (1-11) nearly made a 16-point deficit evaporate, but Purdue's (6-6) defense held strong against a late the Hoosiers comeback to clinch the victory. Tre Roberson threw for 146 yards while going 17-26 for Indiana. He threw one interception. Roberson also ran for 69 yards on 18 attempts. Roberson had a trusted receiver in Kofi Hughes. He hauled in five catches for 64 yards. The Hoosiers racked up 354 total yards. Indiana's rushing attack contributed 208 yards on 34 carries in addition to Roberson's passing effort. The Boilermakers' Caleb TerBush passed for 191 yards, completing 16 of 25 throws. He threw one touchdown and no interceptions. TerBush also ran for 48 yards on eight attempts. Justin Siller was the player TerBush targeted most often. He hauled in five catches for 43 yards. Purdue finished with 508 total yards, including 214 yards passing while completing 19 of 31 attempts. The Boilermakers' ground game balanced their offense, bringing 294 yards on 55 attempts.

FOURTH QUARTER: Purdue ran for 118 yards in the quarter, and the Boilermakers kept Indiana at bay for a 33-25 victory. Purdue opened up the lead, 26-17, after marching down the field for a 17-play, 81-yard drive that ended when Carson Wiggs made a 22-yard field goal. The Boilermakers added to their advantage when Antavian Edison ran five yards to paydirt, capping off a two-play, 55-yard drive to give Purdue the lead, 33-17. The Boilermakers' drive was keyed by Akeem Hunt's 50-yard run. The Hoosiers made the score 33-25 after D'Angelo Roberts turned a handoff into a five-yard touchdown to finish off a 76-yard drive. The key play on Indiana's drive was Stephen Houston's 41-yard run. The Hoosiers put two points on the board when Shane Wynn completed a two-yard pass. Indiana's Houston reached the 100-yard rushing mark for the game thanks to 41 in the quarter, and ended his day with 129 yards in all. Hunt clinched a 100-yard rushing game with 96 in the quarter, part of his 100-yard day for Purdue.

THIRD QUARTER: The two teams combined for more punts than points in a slow third quarter and the margin is still six, as Purdue leads 23-17. With neither team able to move the ball, there were two punts in the quarter. The Boilermakers will start the fourth quarter with possession at Indiana's 30-yard line.

FIRST QUARTER: Thanks to a mean rushing attack, Indiana leads 14-7 at the end of the first quarter. The Hoosiers rushed for 82 yards in the quarter. The Hoosiers scored when Stephen Houston pounded in a 52-yard touchdown run to put the finishing touches on a three-play, 81-yard drive, giving Indiana the game's first lead. Purdue tied things up at seven when a 10-play, 80-yard drive ended after Caleb TerBush and Antavian Edison hooked up for a 14-yard touchdown. The Hoosiers broke the 7-7 tie when D'Angelo Roberts turned a handoff into a six-yard touchdown to put a bow on a three-play, 49-yard scoring drive. Indiana started in good field position when Kenny Mullen's big kickoff return. The Boilermakers will start the second quarter with the ball on the Hoosiers' 31-yard line.

Stephen Houston with 70 rushing yards on four carries and a TD in the first. IU has run only 10 plays…Purdue has run 27. #iufb #bucketgame