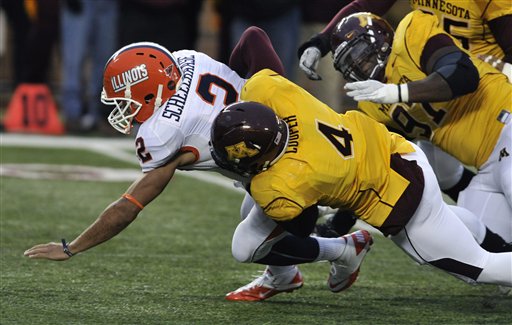 (AP) MarQueis Gray rushed for 167 yards and two touchdowns and threw for another score, guiding Minnesota past backsliding Illinois 27-7 on Saturday in the season finale and sending the Fighting Illini to their sixth straight defeat. Gray took off 27 times to break the single-season rushing record for a Golden Gophers quarterback, giving him 966 yards. Billy Cockerham had 831 yards rushing in 1999. Troy Pollard's 11-yard touchdown run in the third quarter was the only highlight for the Illini (6-6, 2-6 Big Ten), who wasted their best start in 60 years and put coach Ron Zook's job in obvious danger. Read the full AP recap, see the box score and view our Big Ten scoreboard.

FINAL: MarQueis Gray put the team on his back in Minnesota's 27-7 win over Illinois on Saturday at TCF Bank Stadium, rushing for 172 rushing yards and two touchdowns. Minnesota's (3-9) secondary was superb in snuffing out Illinois' (6-6) passing game. The Fighting Illini were only able to gain 75 yards through the air in the losing effort. The Golden Gophers forced Illinois to take to the air after shutting down its rushing game. The Fighting Illini could only manage 93 rushing yards against the Minnesota defense. The Golden Gophers did not allow Illinois' offense to get going throughout the contest. The Fighting Illini managed only 168 total yards in the game. Minnesota's offense finished the game having gained 338 yards. In addition to Gray's efforts through the air, the Golden Gophers also rushed 52 times for 250 yards. Gray threw for 88 yards while completing seven of 16 passes for Minnesota. Gray finished the game with one touchdown and no interceptions. Illinois' Reilly O'Toole passed for 61 yards, completing 11 of 21 throws. He threw no interceptions. O'Toole was also a threat on the ground, as he rushed for 28 yards on seven attempts.

FOURTH QUARTER: The two teams combined for more punts than points in a slow fourth quarter and Minnesota finished off Illinois 27-7. The teams' stale offenses boomed a total of two punts in the quarter. The Golden Gophers' front seven stepped up in the quarter, allowing the Fighting Illini to gain just 17 rushing yards.

THIRD QUARTER: In the third quarter, Troy Pollard fought back for Illinois. He ran for 30 yards and one touchdown, but the margin is still 20, as the Fighting Illini trail 27-7. Minnesota made its lead 27-0 when MarQueis Gray took a quarterback draw all the way for a 14-yard touchdown run on the last play of a seven-play, 57-yard drive. The ground game accounted for every yard on that drive. Illinois polished off an 80-yard drive when Pollard ran 12 yards to paydirt to make the score 27-7. The Golden Gophers will start the fourth quarter with possession at their own 48-yard line.

SECOND QUARTER: The offense led Minnesota to 20 second-quarter points, and the Golden Gophers now lead 20-0. Minnesota executed a balanced offensive attack in the quarter, finishing with 67 yards passing and 87 yards rushing. The Golden Gophers struck first when MarQueis Gray kept it himself for a 15-yard touchdown run, the final play of a one-play, 15-yard drive. A fumble recovery by Minnesota set the Golden Gophers up to start the drive. Minnesota added to its advantage when Gray and John Rabe hooked up for an eight-yard touchdown, the final play on a seven-play, 48-yard drive to give the Golden Gophers the lead, 14-0. Minnesota started in good field position when Brandon Green returned a punt. The Golden Gophers opened up the lead, 17-0, after Jordan Wettstein made a 43-yard field goal to end an eight-play, 61-yard drive. Gray's 35-yard run took Minnesota from the 17 and across midfield to ignite the drive. The Golden Gophers expanded their lead to 20-0 thanks to a five-play, 26-yard drive that ended when Wettstein kicked a 51-yard field goal. Minnesota's Gray topped 100 yards rushing for the game in the quarter, and has plenty of time to add to his 108 total yards on the ground. Illinois is set to receive to start the second half.

FIRST QUARTER: The first quarter was so slow, the teams combined for more punts than points, and the game is tied 0-0 at the end of the first quarter. Both teams saw their defenses make stands, forcing six punts in the quarter. Minnesota will start the second quarter with possession at its own 42-yard line.

When was last time Gophers QB played a game like this to finish the season? Gray's got three TDs and MN up 27-0. But he could finish with…

You can't defeat the Minnesota Gophers in Minneapolis on the Saturday after Thanksgiving. It can't be done.

The #Illini haven't scored in the first quarter in six straight games, dating back to the Indiana win on Oct. 8.