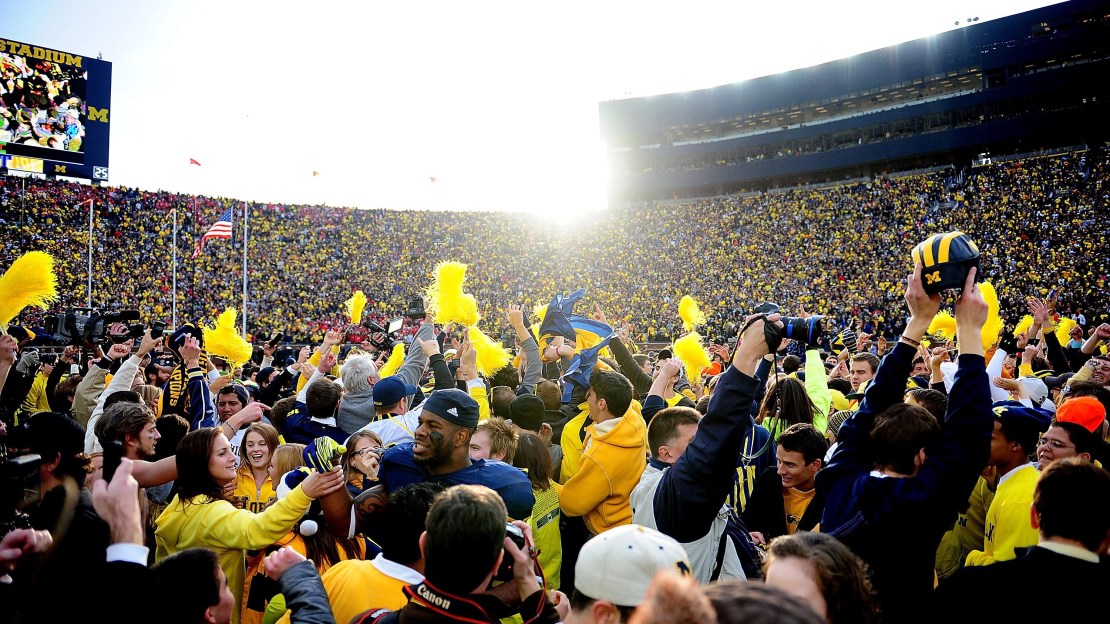 ANN ARBOR, Mich. - None of the Michigan players were allowed to forget how many days had passes since the Wolverines last beat Ohio State. A countdown clock in the Michigan locker room screamed out the embarrassing fact: 2,926 days.

"You want to motivate your players on a daily basis,? said Michigan coach Brady Hoke prior to the game. ?It's just a reminder. It goes back to the great rivalry that this game is. There is a clock for the great rivalry when we play Michigan State. So those two games have always held significance in Michigan football history, and they will continue to."

Yes, Michigan State is a big rival-a rival that Hoke and the Wolverines will have to wait another year to attempt to beat. But nothing gets the blue blood boiling harder along State Street than Ohio State. And nothing makes hearts pump fastest than beating Ohio State, which is what Michigan did today, 40-34 (read the game story).

Yes, winning Big Ten titles is vital, but this is the game Michigan coaches are measured by. Rich Rodriguez didn?t measure up on either count, which is why he was out after only three seasons in Ann Arbor as the losing skein grew to seven games under his watch.

Hoke? He?s 1-0 vs. ?Ohio,? as he calls Ohio State, refusing to utter ?Ohio State? out of apparent contempt for the school. And Hoke is King of Ann Arbor-at least for one year. There will be no Big Ten title during his maiden voyage at Michigan. But there is this sweet victory over Ohio State to make Michigan 10-2-and an at-large BCS bowl also may be waiting for the Wolverines.

"It's an important game. Since Day One you know I've said that,? said Hoke, the first Michigan coach since Fielding Yost who won 11 in 1901 to win 10 or more games in his debut season. ?It's a great rivalry. But to see those kids, the joys, the tears, that's why you coach and that's why this is such a great game."

For his part, Hoke wasn?t going to talk to his players about the confounding run of futility. He knew the message already had been delivered. He didn?t need to remind them anymore. They all knew the streak had to end. Heck, the team breaks huddles in meetings by shouting ?Beat Ohio!?

"To be honest with you, I haven't talked about that at all with our team and probably won't,? said Hoke. ?We've got educated young men that are here. We're a great university. I think me telling them that would probably insult them in their intelligence."

This year?s game will have a special place in Michigan lore. This year, 2011, forever will be remembered as they year the Wolverines beat Ohio State to end the seven-year losing streak that dated to 2003. How long ago was that? Justin Bieber was a 9-year old playing with dolls, gasoline was $1.83 a gallon and the Big Ten was flourishing as an 11-team league.

Denard Robinson was the star, throwing for three touchdowns and passing for two more. He finished with 337 yards of offense, running 26 times for 170 yards and hitting 14-of-17 passes for 167 yards. And running back Fitzgerald Toussaint continued to emerge, running 20 times for 120 yards to pass the 1,000-yard mark for the season. Now, he and Robinson each have rushed for 1,000 yards, the first time Michigan has had two 1,000-yard rushers in a season since 1975.

What?s next for Ohio State? The Buckeyes head home with an unknown future. Myriad media outlets are reporting that Urban Meyer will be named head coach as soon as this week. And the NCAA is expected to soon weigh in with a verdict following an investigation. But Ohio State had to focus, a task complicated by a two-game losing streak the team carried into this game.

The Buckeyes close the regular-season 6-6, the school?s worst mark since a 6-6 finish in 1999 under John Cooper, a name few in Columbus imagined would be mentioned today. Inconsistency dogged Ohio State all season, especially an offense that went in fits and starts with true freshman quarterback Braxton Miller at the controls most of the season.
There was a stunning win over Wisconsin; there was a stunning loss at Purdue. Typical. But the Buckeyes almost pulled off the upset today behind Miller, who ran for 100 yards and a score and completed 14-of-25 passes for 235 yards with two touchdowns and a pick. But Ohio State was gashed on the ground (277 yards to 137), which proved to be the difference.

Now, Michigan can dream of its postseason possibilities-and possibly a change in its future fortunes.

"It is amazing, especially looking back how everything transpired from Lloyd (Carr), to Rich (Rodriguez), to now Coach Hoke, it's amazing how much this game can change,? said Michigan center David Molk.? I came in here to Michigan thinking, 'Alright, Coach Carr is going to be here forever,' but obviously that's not true. How everything develops and everything transpires, it relies in a lot of variables. When you can truly control a lot of them you can change and improve a team greatly, and we've done that."