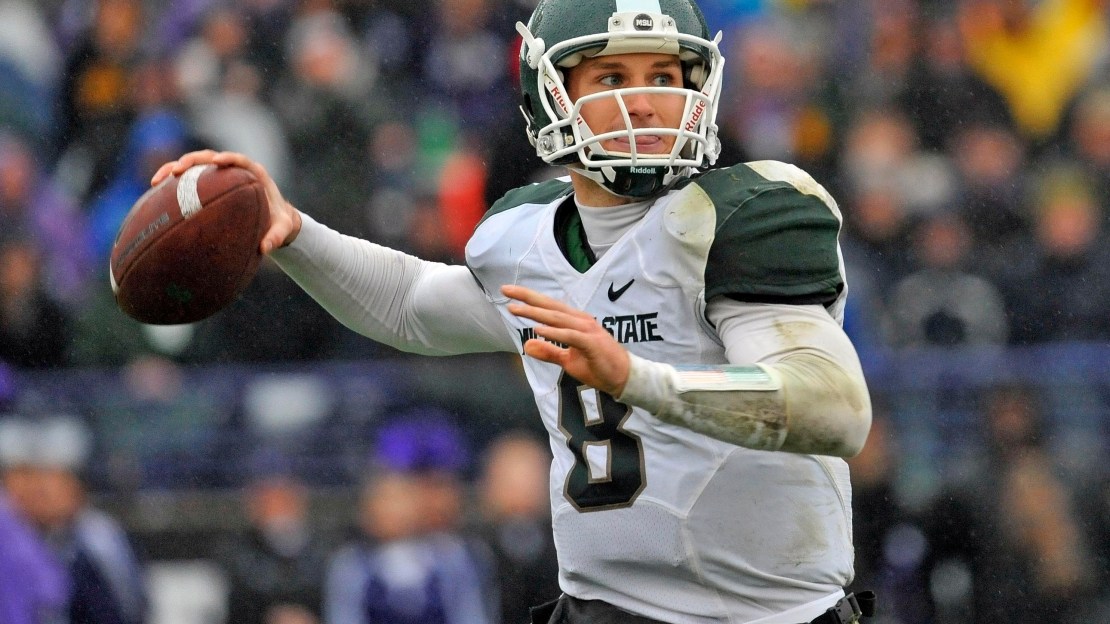 (AP) Keshawn Martin returned a punt 57 yards for a touchdown just before halftime and Kirk Cousins threw two TD passes to B.J. Cunningham as No. 11 Michigan State warmed up for next week's Big Ten championship game by beating Northwestern 31-17 on Saturday. Cousins threw a 33-yarder to Cunningham in the third quarter and hit him again on a juggling 29-yarder with 5:17 left to complete a 93-yard drive. It was the 62nd career TD pass for Cousins, breaking the school record held by Jeff Smoker (61). The Spartans will play the winner of the Penn State-Wisconsin game in the title game. Read the AP recap, see the box score and view our Big Ten scoreboard.

Check out our quarter-by-quarter recap: powered by Narrative Science:

FINAL: Kirk Cousins found B.J. Cunningham frequently, as both helped No. 11 Michigan State notch a 31-17 victory over Northwestern on Saturday at Ryan Field. Cousins hit Cunningham for 120 yards on six catches during the win. Home run plays keyed Michigan State's (10-2) scoring attack. Northwestern's (6-6) defense gave up six plays of at least 20 yards. With 2:30 to go in the second quarter, Cousins found Keshawn Martin open for a 46-yard pass, the Spartans' biggest gain of the game. The big play set up an 11-play drive that gave Michigan State a 10-3 lead after Le'Veon Bell turned a handoff into a seven-yard touchdown. A lone bright spot for the Wildcats was Dan Persa, who made enough good throws to finish with 245 passing yards. He was 23 for 32 on pass attempts and tossed two touchdowns. Northwestern finished with 370 total yards, including 253 yards passing while completing 24 of 34 attempts. The Wildcats' rushing attack also contributed 117 yards to the total, with the tally coming on 41 carries. Cousins threw for 214 yards while going 14-20 for the Spartans. He threw two touchdowns and one interception. Cousins also ran for 25 yards on four attempts. Michigan State racked up 380 total yards. The Spartans' rushing attack contributed 166 yards on 36 carries in addition to Cousins' passing effort.

FOURTH QUARTER: Michigan State put on a defensive clinic in the fourth, as Northwestern finished with negative rushing yardage (-3 yards), and the Spartans kept the game out of reach for a 31-17 victory over the Wildcats. Northwestern made the score 24-17 after Dan Persa tossed a 12-yard touchdown to Demetrius Fields to finish off a 65-yard drive. Michigan State opened up the lead, 31-17, after marching down the field for an eight-play, 93-yard drive that ended when Kirk Cousins and B.J. Cunningham combined for a 29-yard touchdown. Cousins' 25-yard pass to Cunningham from the 42-yard line pushed the Spartans into enemy territory. The Wildcats' Persa reached the 200-yard passing mark for the game thanks to 80 in the quarter, and ended his day with 245 yards in all. Michigan State's Cunningham topped 100 yards receiving for the game in the quarter, and finished his day with 120 yards on six catches. The Spartans' Cousins hit 200 yards passing for the game in the quarter, part of his 214-yard passing performance.

THIRD QUARTER: Dan Persa had a productive quarter for Northwestern. He threw for 115 yards and one touchdown and ran for 19 yards, but the margin is still 14, as the Wildcats trail 24-10. Northwestern put the finishing touches on a 69-yard drive when Persa and Jeremy Ebert combined for a two-yard touchdown to make the score 17-10. The Wildcats used Persa's 69-yard pass to Drake Dunsmore to fuel the drive. Michigan State added to its advantage when Kirk Cousins and B.J. Cunningham hooked up for a 33-yard touchdown, the clincher of a 10-play, 67-yard drive to give the Spartans the lead, 24-10. Northwestern has the ball at Michigan State's 32-yard line to begin the fourth quarter.

SECOND QUARTER: Michigan State aired it out to the tune of 84 passing yards in the quarter, and the Spartans now lead 17-3. Northwestern tied the score at three apiece after Jeff Budzien kicked a 34-yard field goal to put the finishing touches on a 12-play, 44-yard drive. Le'Veon Bell pounded in a seven-yard touchdown run to break the 3-3 tie in favor of Michigan State. The play put the finishing touches on an eight-play, 97-yard scoring drive. The Spartans' drive was keyed by Kirk Cousins' 46-yard pass. Michigan State made the score 17-3 when Keshawn Martin returned a punt for a touchdown. The Wildcats will receive to start the second half.

FIRST QUARTER: No. 11 Michigan State gained 69 yards on the ground in the first, and the Spartans lead 3-0 at the end of the first quarter. Michigan State struck first when Dan Conroy made a 25-yard field goal, the final play of a 13-play, 72-yard drive. Northwestern will start the second quarter with possession at the Spartans' 25-yard line.

Watchin my Spartan Dawgs put this beating on NU….

this is like when Watkins wasn't prepared last year after Persa went down; CB Daniel Jones (in for inj Mabin) getting worked

That was an NFL throw from Cousins to Cunningham, on the run, laser for 33-yard touchdown.

Don't see BJ Cunningham drop one often, especially in the end zone. Of course, it is raining, weird lights were in his eyes, something?