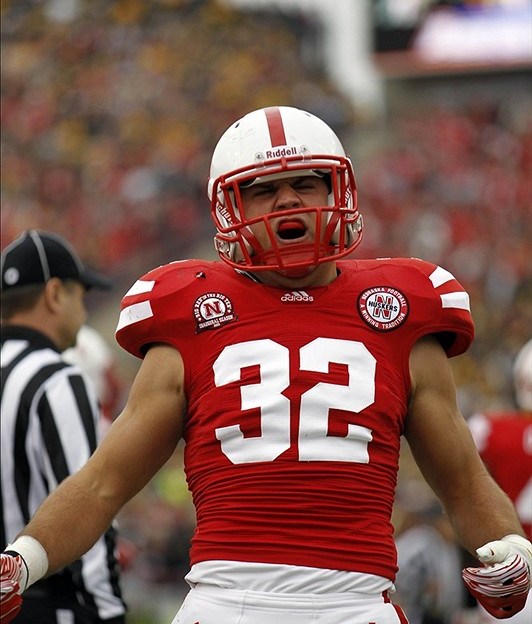 Rex Burkhead, who started the week with his right foot in a walking boot, ran for 160 yards and a touchdown on a school-record 38 carries and No. 22 Nebraska defeated Iowa 20-7 on Friday. Burkhead pounded away at Iowa's defense 4 and 5 yards at a time and looked like his old self after being held to a season-low 36 yards in last week's loss at Michigan.

Read the full AP recap here. And know that throughout Friday's game we provided quarter-by-quarter recaps. Find the lists of updates below and and read the final box score here.

FINAL RECAP: No. 21 Nebraska beat Iowa 20-7 thanks to a tag-team effort from Rex Burkhead and Taylor Martinez on Friday at Memorial Stadium. Martinez racked up 163 yards through the air and Burkhead rumbled for 159 yards and one touchdown on the ground.

Iowa (7-5) found yardage hard to come by as Nebraska's (9-3) defense clamped down throughout the contest. The Cornhuskers' defensive unit stood firm against the Hawkeyes' offense, holding Iowa to 270 total yards. Marcus Coker did his best to carry the Hawkeyes' offense, turning 18 carries into 87 rushing yards and one touchdown.

FOURTH QUARTER: In the fourth quarter, Nebraska's Rex Burkhead stood out. He ran for 30 yards and one touchdown, and the Cornhuskers finished off Iowa 20-7. Nebraska opened up the lead, 20-0, after Burkhead turned a handoff into a two-yard touchdown to end a 10-play, 80-yard drive. The Cornhuskers crossed midfield on Taylor Martinez's 22-yard pass to Kenny Bell from the 45-yard line. The Hawkeyes closed the gap to 20-7 when Marcus Coker ran two yards to paydirt to cap off an 80-yard drive. James Vandenberg's 26-yard pass to Marvin McNutt took Iowa from the 36 and across midfield to ignite the drive.

THIRD QUARTER: The third quarter was so slow, the teams combined for more punts than points, and Nebraska now leads 13-0. With neither team able to move the ball, there were four punts in the quarter. The Cornhuskers added to their advantage when Brett Maher made a 20-yard field goal, polishing off an 11-play, 82-yard drive to give Nebraska the lead, 13-0. The Cornhuskers' Rex Burkhead rushed for 50 yards in the quarter to put him over 100 yards for the game. Burkhead has 129 total yards on the ground so far today. Nebraska has possession at its own 26-yard line to start the fourth quarter.

SECOND QUARTER – Nebraska 10, Iowa 0:Nebraska's defense held tough in the second quarter, holding Iowa to 34 total yards of offense and the Cornhuskers now lead 10-0. Nebraska sniffed out the Hawkeyes' rushing attack in the quarter, holding Iowa to 17 rush yards. The Cornhuskers got on the scoreboard first, rattling off a 10-play, 52-yard drive that ended in a score when Brett Maher kicked a 40-yard field goal. Nebraska threw just two times during that series.

The Cornhuskers made their lead 10-0 when Taylor Martinez and Kyler Reed hooked up for a six-yard touchdown on the last play of a 14-play, 80-yard drive. Nebraska used a grind-it-out style on the drive, as no play went for more than nine yards. The Cornhuskers threw just one time on that possession.

Nebraska will receive to start the second half.

FIRST QUARTER – IOWA 0, NEBRASKA 0: Fans were treated to more punts than points in the first quarter, and the game is tied 0-0 at the end of the first quarter. Both teams saw their defenses make stands, forcing five punts in the quarter. No. 21 Nebraska will start the second quarter with the ball on its own 30-yard line.

Fitting end to Iowa's inconsistent. Too bad. Ferentz will have them ready for a bowl, maybe the Gator

#Huskers defeat the Hawkeyes 20-7 to send the seniors off the right way. Proud of this team.