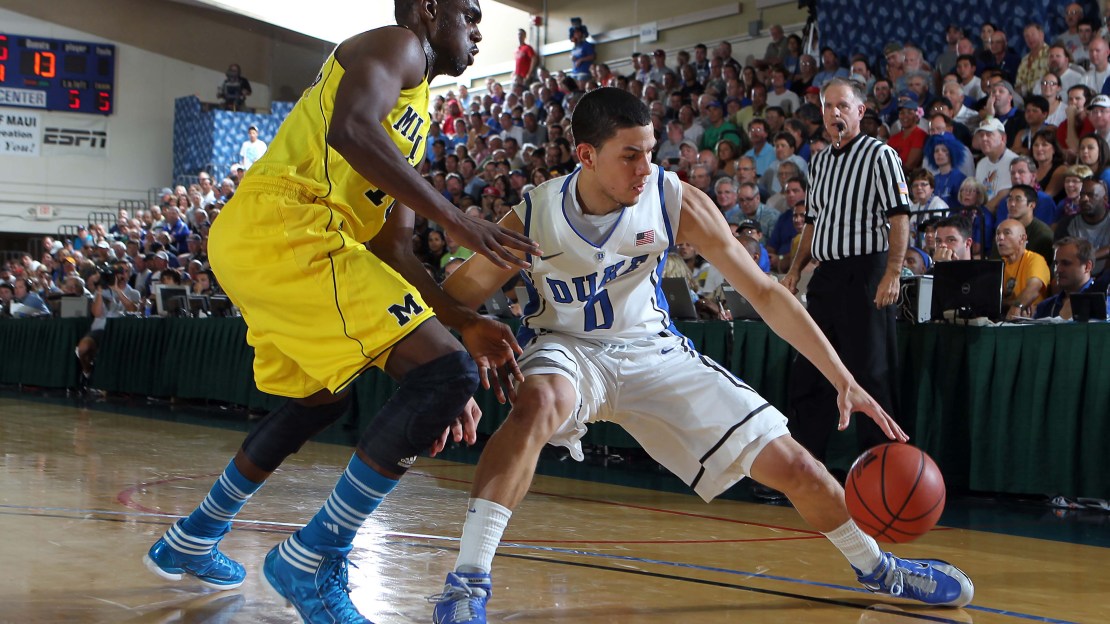 If you ask most national observers about John Beilein's coaching style, you'll hear phrases like "live and die by the three" or "offensive-minded." In Maui, Michigan used none of the above to get an impressive win over Memphis. The Wolverines took their threes, sure, but they weren't particularly good from there. Instead, they dominated the Tigers in the paint, making those national observers' collective heads explode. On the strength of all those high-percentage twos, Michigan scored a solid 1.09 points per possession. This distribution shouldn't really surprise us; Beilein's best offenses have always paired lots of threes with highly accurate two-point shooting, thanks to backcuts and drives on defenders totally stressed out about three-pointers. This two-point success was spearheaded by guards Tim Hardaway Jr. and Trey Burke, who combined to shoot 12 of 16 inside the arc.

That said, the offensive end wasn't where Beilein's team was most impressive. That was on the defensive end, where Memphis was held to just 0.91 points per trip–that's some absolutely stifling D. Consider that last season Memphis' output was held that low only five times, and this season's version of the Tigers will be considerably more prolific. Just a week ago this same Memphis team scored a scalding 1.22 points per trip on a good Belmont defense, and they put up a 1.11 efficiency against Tennessee. Memphis is clearly not a top 10 team as pollsters thought–their defense is looking mediocre–but this is still a nice win for Beilein's squad to have in its pocket.

Michigan moved on to the semifinal against Duke, where a slow start doomed the Wolverines to play from behind the entire game. It was a valiant effort, but the Blue Devils ultimately prevailed by an 82-75 score. This time, the Michigan offense was a clear bright spot, as their 1.17 efficiency may not be surrendered again by Duke all season. Incidentally, that's almost the exact same output Michigan put up in their tournament loss to the Blue Devils eight months ago.

The problem was that the Wolverines couldn't slow down Duke's shooters, as the Blue Devils shot a sizzling 60 percent on twos and 52 percent on threes. Unless you force a ridiculous turnover rate (and Michigan didn't), those numbers spell a loss. Still, it was an encouraging enough performance, and there's no shame in losing to a team as good as Duke by single digits.

In my opinion, Michigan still doesn't look like the preseason top 20 team many expected them to be, but they aren't too far off. The Wolverines should be able to finish their nonconference slate without another loss if they're truly that good, but a road game at Virginia on Tuesday could be a tough one.

Illinois is also enjoying a trip to a tropical destination, and they managed a nine point win over a decent Richmond team. My first thought watching this game was, "you gotta get a chandelier!"

You like playing basketball? Try playing it under a chandelier. Illinois took advantage of the classy environs for a dominant first half, in which they scored 1.23 points per possession and held Richmond to a 0.66 efficiency. Most encouraging about that half is that Illinois scored at that high level without shooting well from the field, something you couldn't have expected out of last season's hot-and-cold Illini. The result was an 18-point halftime lead.

In the second half, Richmond came storming back on some hot shooting–prompting numerous calls of "tres puntos!" from culture-conscious commentator Thad Anderson–but the Spiders were never able to get closer than five points. Sam Maniscalco showed his value to the team down the stretch, as he manufactured points for what had become a stagnant Illinois offense. The fifth-year senior finished with 19 points on 13 shots.

This was a coming-out party for 7-1 sophomore Meyers Leonard, who looked absolutely dominant in racking up 22 points, 12 rebounds, and five blocks. It's just one game against NIT-level competition, but his emergence could go a long way towards Illinois being a tournament team. Brandon Paul, on the other hand, had possibly his quietest game as an Illini with zero points in 19 minutes.

Back on the chandelier-less courts of the United States, other Big Ten members romped over lesser teams. Of note:

Today is a busy day for turkey-buying procrastinators and Big Ten basketball teams alike. Eight of the 12 conference members are in action tonight, and all eight should be favored. The most competitive-looking games are Nebraska vs Oregon, Michigan vs UCLA, and Illinois vs Illinois State. Not exactly marquee matchups, but hey, it's the night before Thanksgiving.

Enjoy the hoops and get ready to stuff your face.