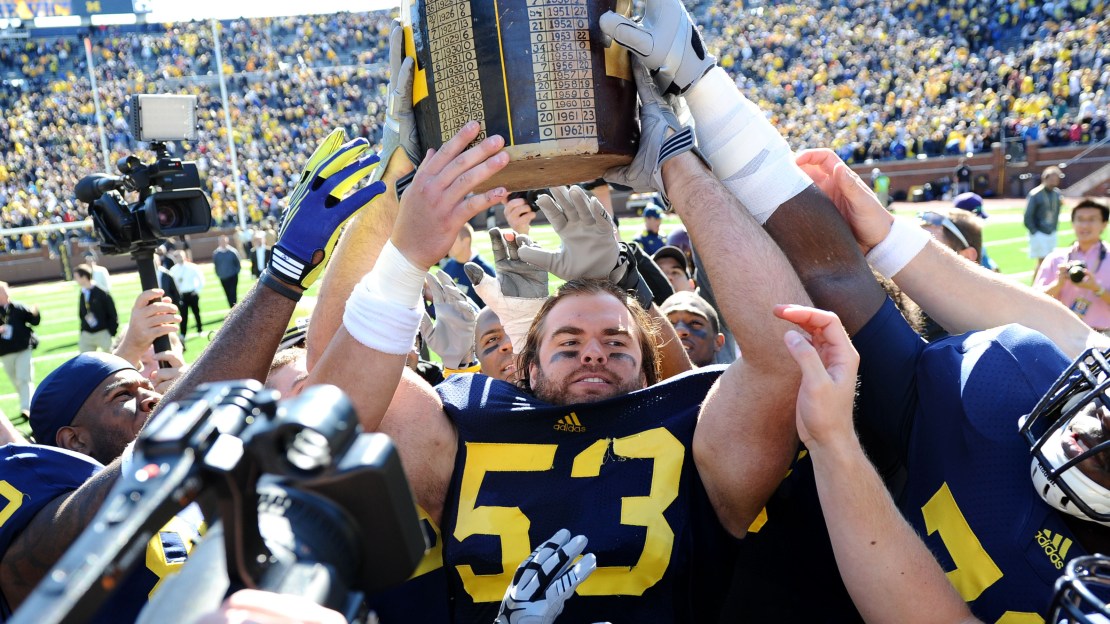 The 6-6, 288-pound senior-who last week in a dominating win over Nebraska had two tackles for loss, a sack and a fumble recovery and has seven tackles for loss in the past four games-is an anchor for a Wolverine line that has been the strength of the defense. And it?s a defense that is backstopping a team that has a chance possibly to earn a BCS at-large bowl bid if it can beat Ohio State this Saturday to finish 10-2.

It has been a some time since Michigan was a serious Big Ten contender, last winning a share of the championship in 2004. That was under Lloyd Carr, who retired after the 2007 season. Rich Rodriguez assumed command, and Michigan floundered like it hadn't since the pre-Bo Schembechler days in the 1960s. Rodriguez was out after three seasons. Brady Hoke has taken over, and the Wolverine fortunes are changing quickly-largely because of the defense.

I caught up with Van Bergen, who has 34 tackles and leads the team with 10 tackles for loss and 4.5 sacks, as he prepared for Ohio State-and possibly so much more.

Q: What has been the key to the evolution of the defense?
A: We put in a lot of extra work over the summer and we were confident we could be this kind of defense back then. We have had so many guys buying in and there is so much confidence and it?s a lot of fun right now.

Q: What?s the biggest difference between Brady Hoke and this staff and the former coaching regime?
A: The scheme is different. We ran a 3-3-5 last year and we are in base 4-3 this year. Maybe the biggest difference besides scheme would be mentality. (Defensive coordinator Greg) Mattison brings with him a much more aggressive attitude and approach, and that is vs. pass and vs. run. Other things would be techniques and fundamentals. We are playing much better and smarter football.

Q: What has been the defense?s best game so far?
A: Illinois and Nebraska probably have been our best efforts. Maybe Nebraska, because they were a bit higher ranked offense and are a little more dynamic with (Taylor) Martinez and (Rex) Burkhead. We want to keep getting better. Against Illinois, we gave up one third down in the first half but in the second half we gave up points. We want to play a whole game where the numbers look like this defense is the real deal. We are excited that we still have a couple of opportunities to do it.

Q: How has your game changed and improved in 2011?
A: I think my game has improved tremendously. There are situations where I have to take a bullet and get double-teamed and let one of the ?backers come free. But aside from that, Coach kinda lets me do my own thing a lot more often than I think other guys do. And I am honored to have that opportunity. If you watch our defensive line, we always are moving around and doing different stunts and stuff. Coach Mattison doesn?t call those. He lets me call it. He trusts me to do it on the field, to read the formation and different things I?ve seen. I think that?s huge. What coach trusts their players that much to let them do that? I also think I?m better because I?m just working hard. I?m not the most talented guy in the world, but myself and others have worked tremendously hard to get here.

Q: How big is this Ohio State game, knowing that Michigan has lost the last seven meetings?
A: It?s huge, regardless of the seven losses in a row. To me, the most hype and the biggest stage is Michigan-Ohio State aside from what else is around this games, the seven straight, the BCS, that doesn?t add to it for me because this already is a big game. That?s how I feel.

Q: What would it mean to be part of team that turns tide in this storied rivalry?
A: It would be huge for me, the seniors and everyone involved in the program. But Coach Hoke already said it: If we end up just focusing on Saturday, it will be a lack of emphasis on this week of preparation. We all are doing our best to keep our focus on the preparation on the here and now. You win the game on Tuesday, Wednesday and Thursday. Saturday is just the result.

Q: Back in the summer, could you have imaged that Michigan would be 9-2 heading into the season finale?
A: Honestly, we felt we could do it. I don?t know if some guys were just going along and didn?t truly feel that way, but that?s what I thought and so did many others. We totally, 100 percent bought into the notion that there wasn?t one game on our schedule that wasn?t winnable. We just had to work for it. And we are where we are because we have worked for it.