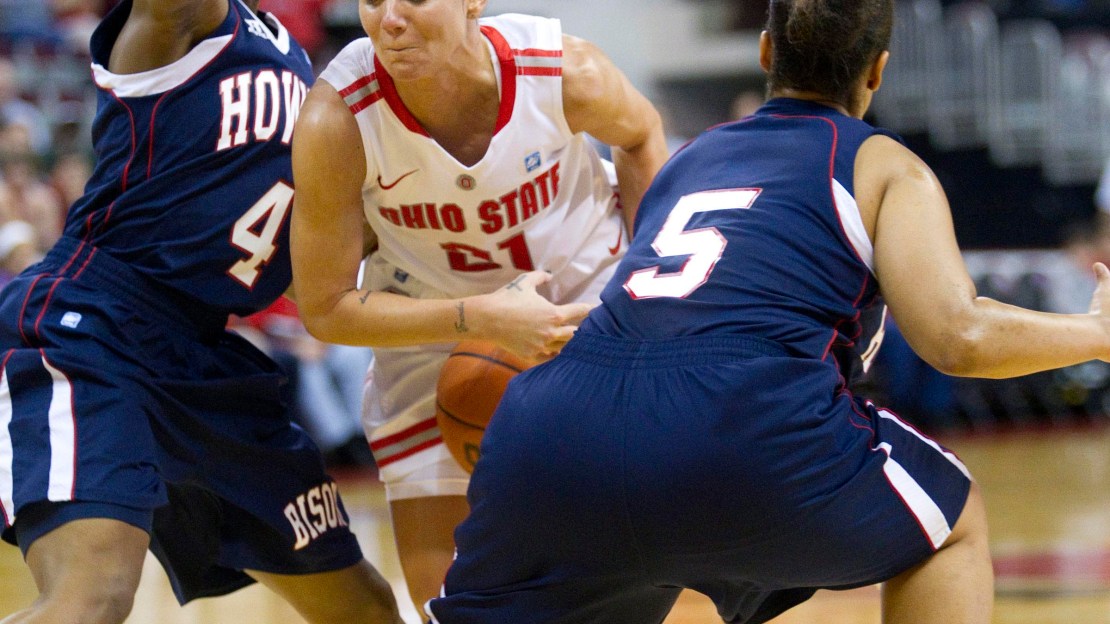 Five Big Ten women's basketball teams were in action Tuesday night, including No. 15 Purdue and No. 18 Ohio State. Both ranked teams win in easy fashion, with the Boilermakers dismantling Chicago State, 76-49, and the Buckeyes disposing of Howard, 73-50. Not to be ignored, Northwestern rallied to upset No. 20 LSU. Watch our video highlight and analysis from Purdue's win now and catch up on all the Big Ten action in this post.

(AP) Tayler Hill scored 18 points, hitting three 3-pointers, and No. 18 Ohio State beat Howard 73-50 on Tuesday night. Darryce Moore added 15 points for the Buckeyes (3-0), who scored 40 points in the paint and had 21 assists, including seven from Samantha Prahalis. The Buckeyes jumped out to 16-4 lead in the first six minutes with all but two points coming off layups. Howard tightened its interior play and forced Ohio State into five turnovers in 9 minutes while finding a rhythm on offense. The Bison got to within 27-24 on a free throw by Doyle, but Hill made a 3-pointer from the left corner to propel the Buckeyes to a 37-28 halftime lead and they were never threatened in the second half.

(AP) Brittany Rayburn had 13 points and five assists to help No. 15 Purdue beat Chicago State 76-49 on Tuesday night. K.K. Houser added 11 points, seven assists and five steals, while Sam Ostarello had eight points, seven rebounds, five assists and three steals for the Boilermakers (4-0) in their final tuneup before their trip to Cancun, Mexico. Twelve players scored for Purdue, which shot 57 percent from the field and made 6 of 12 3-pointers. The Boilermakers forced 28 turnovers to offset 23 of their own.

(AP) Morgan Jones made two free throws with 11 seconds left to give Northwestern a 44-43 victory over No. 20 LSU on Tuesday night. The Lady Tigers' LaSondra Barrett missed the front end of a one-and-one with 30 seconds remaining to give the Wildcats one last chance at a victory. After Jones made her foul shots, LSU's Theresa Plaisance missed a 3-pointer with 2 seconds to play. Brittany Orban scored 13 points to lead Northwestern (4-0) while Jones contributed 11 points and nine rebounds.

The Indiana women's basketball team jumped ahead early, but Miami (OH) never relinquished the lead late in the game to top IU, 77-72, in Oxford on Tuesday night. Georgie Jones had her second double-double of the season with 13 points and 11 rebounds. Jasmine McGhee led Indiana in scoring with 18 points and Aulani Sinclair added 11 points in her first start of the season. Read the full recap at IUHoosiers.com.