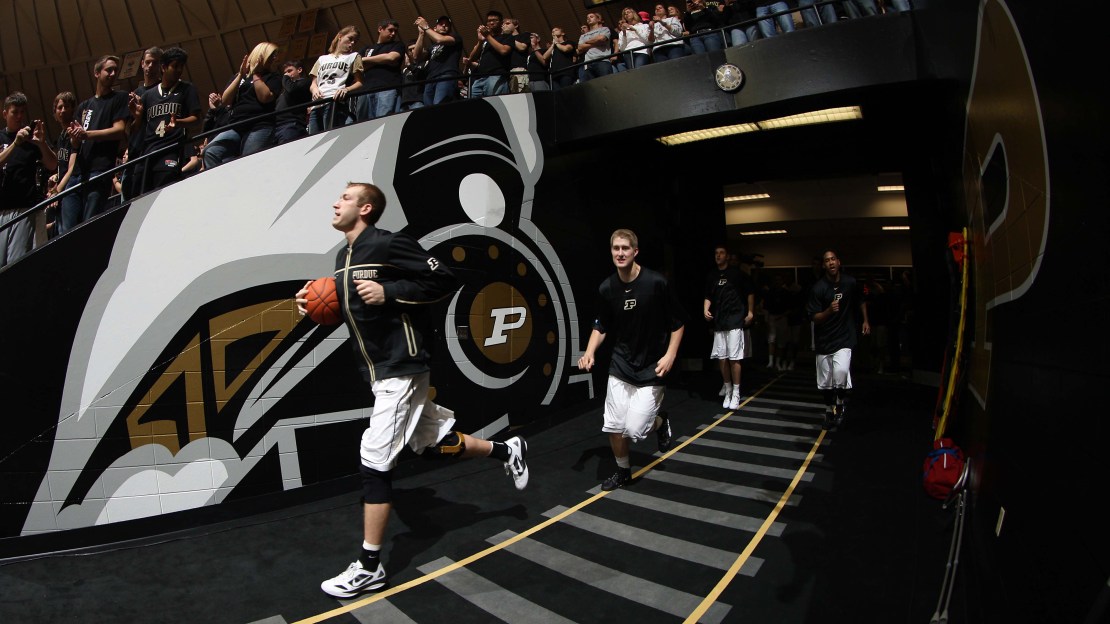 Next up on our Big Ten season previews are the Boilermakers, who lost stars E'Twaun Moore and JaJuan Johnson but return the other popular Baby Boiler, Robbie Hummel. What?s a reasonable range of expectations for Matt Painter's team? We have them finishing in third place. How does a big increase in usage affect the efficiency of a role player? That is the question at hand for the 2011-12 Purdue Boilermakers. It's hard to imagine a team relying more heavily on two players than Purdue did last season, as JaJuan Johnson and E'Twaun Moore each took massive shot diets and rarely left the court. All told, the pair accounted for a staggering 75 percent of Purdue's offense. Their excellence allowed guys like Lewis Jackson, D.J. Byrd, and Ryne Smith to settle into comfortable low-usage roles, which they handled masterfully.

With Moore and Johnson now gone, who takes the shots? The first option, assuming his health holds up, is obviously Robbie Hummel. The fifth-year senior is returning from a second ACL injury, and his play has been excellent thus far. If Hummel can stay healthy, he gives Purdue a proven all-conference performer. For those that have forgotten, Hummel is an excellent shooter and passer that rarely turns the ball over. The biggest question with Hummel, other than his health, is how he handles being the focal point of an offense. Hummel has always been a second or third banana; he was last seen as Moore's main sidekick in 2009-10. Last season, in Hummel's absence, Johnson became a go-to scorer in his own right, with a shot diet almost identical to Moore's. That's the model Purdue fans have to hope Hummel can follow, as there's nobody else on the roster that's shown any propensity for that amount of shooting. It's not even entirely clear that Hummel's game fits that mold; prior to this season, Hummel had topped a shot diet of 28 percent in just nine of his 46 conference games. Simply put, the role of a go-to scorer is a new one for Hummel, and it will be interesting to see how he handles it over the course of a full season. So far, so good, as Hummel's shot diet is a whopping 32.9 percent through five games (literally off the chart), and he's posted a 55.0 effective field goal percentage, which is just above his career average.

Even if Hummel stays that efficient on that heavy shot diet, that still leaves a lot of opportunities for the supporting cast. In other words, somebody will have to become more than a role player on the offensive end. The three main candidates each come with their own question marks. Lewis Jackson is an amazing finisher given his 5-9 stature, but he's still got something to prove when it comes to perimeter shooting. It's also unclear whether Jackson can assume a larger role without exacerbating the turnover problems that have plagued his three seasons. D.J. Byrd showed flashes of a diverse offensive game as a sophomore, but overall he was a spot-up shooter with some solid passing thrown in. Ditto for Ryne Smith, who was among the most selective shooters in college basketball last season–an attribute that helped him to shoot 47 percent on B1G threes. For Purdue's offense to be successful, at least one of these three guys will need to grow into a bigger shot diet without losing too much efficiency, and that's far from a sure thing, encouraging early results notwithstanding.

On the defensive end, the toughest task will be replacing Johnson, who led the conference in blocked shots each of the last three seasons. Purdue's defensive philosophy, for several seasons now, has been based on aggressively overplaying the perimeter. The guards could get right up into the opposing players with the knowledge that Johnson would be there on the weak side should they get beat. Without that presence inside, Matt Painter might have to shift gears. The good news is that Painter's done it before: in 2006-07, the season before the Baby Boilers arrived, Purdue finished 214th in the nation in block percentage but still had a very tough defense. The loss of Johnson is a big one, but perimeter defenders like Jackson, Smith, and Kelsey Barlow should keep the Boilermakers among the Big Ten's stingiest defenses. The early returns aren't great–since the opener against Northern Illinois, Purdue has allowed over a point per trip in every game–but you have to figure Painter will get that end sorted out eventually.

We felt before the season that Purdue would be the Big Ten's third best team, and our overall assessment hasn't changed. As long as Robbie Hummel is on the floor, this should be a very good basketball team.